Fort Smith woman reflects on her famous photos of 9/11 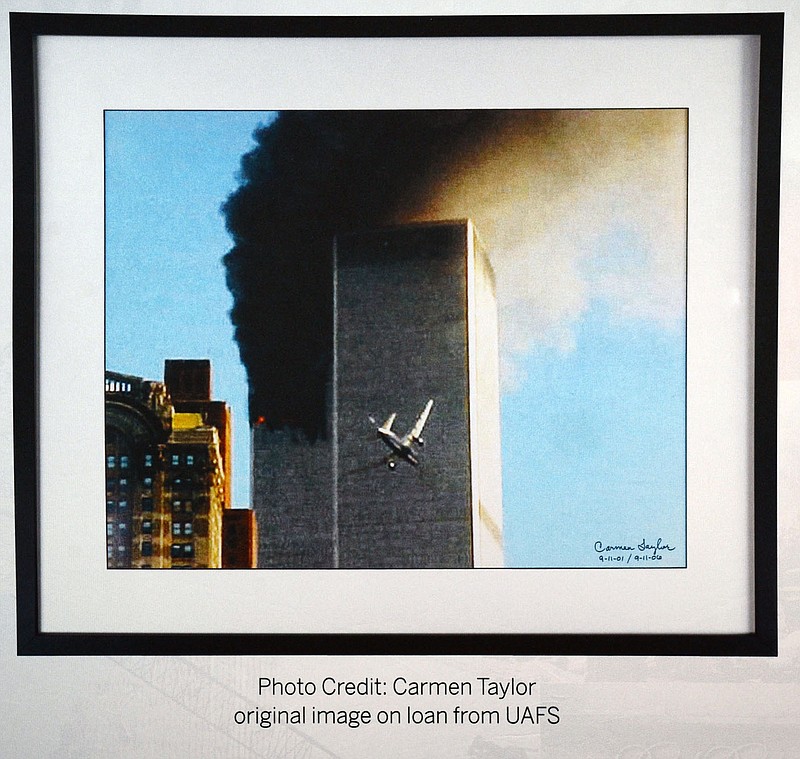 The image captured by Carmen Taylor of United Airlines Flight 175 just before crashing into the World Trade Center's South Tower on Sept. 11, 2001. Taylor was at the U.S. Marshals Museum where a display of photographs of that day and the aftermath are set up. (Special to NWA Democrat Gazette/Brian Sanderford)

It was just a speck in the sky.

She didn't hear it so much as feel it -- a low, approaching vibration. The drone of a distant engine.

She got ready, waiting, arms extended, a digital camera in her hands, pointed at the smoldering north tower of the World Trade Center, where something was very wrong.

The incoming plane must be help -- police, medical or at the very least media. She would get a picture of the plane as it flew by the twin towers.

Or so she thought.

Taylor pressed the shutter a split second before an airliner crashed into the south tower in a spectacular explosion -- creating a fireball in which some people saw the Devil, while others saw angels.

Taylor, who then lived in Lavaca, about 15 miles east of Fort Smith, captured two of the famous images of that day -- one just before Flight 175's impact, and one a few seconds later as the fireball burst from the building.

She has been called the Zapruder of 9/11 -- a reference to Abraham Zapruder, who filmed the assassination of President John F. Kennedy in Dallas in 1963.

Unlike Zapruder, who knew immediately that the president was dead, Taylor wasn't sure what she had captured on her son's Sony Mavica MVC-FD73 digital camera.

Initially, people thought a small aircraft had crashed into the north tower. But it was American Airlines Flight 11 from Boston with 92 people aboard. Sixty-five people were aboard Flight 175, which also originated in Boston. All perished on 9/11.

While waiting in line at Battery Park to board a ferry to the Statue of Liberty, Taylor said a couple told her their nephew worked in the north tower. They looked in that direction. About that time, sparks began to spew from the upper floors. Someone in the crowd said a piece of office equipment must have exploded. Before long, smoke was billowing from the building.

With another plane on the way, Taylor sat on a ferry docked at Battery Park with her feet propped on a rail. She was concentrating on holding the camera still and pushing the shutter at the right time.

"I didn't even realize the thing had banked," she said of the airplane. "And then this massive explosion comes up, nothing like the first tower, massive explosion, fireball. So, I'm watching it, keeping my finger off the shutter because these Mavicas are slow to record. And if you touch them, you can lose what you've got, what you have, and not get anything else. So as soon as it quit recording, I took the next picture."

At most, three seconds passed between her taking the two photos. It became evident to Taylor things were not what they had seemed.

[20 Years After 9/11: Read more stories in this series at arkansasonline.com/after911/]

"What I thought was a rescue was the moment of impact," she said of the first shot. "The second one was a horrible explosion that I didn't even hardly watch because I was thinking about my camera operating. The next day, that picture -- both pictures in fact -- but that picture went around the world when President Bush said 'Our nation saw evil.' And in the middle of that picture, which someone told me days later, was the image of the Devil. And I had not seen that either. And once you see it, you cannot unsee it."

Taylor said she was able to get the shots, in part, because she was by herself.

"Most people were with a group, with someone who was protecting them," she said. "I was like by myself. I had already discovered that if you've got a camera, you can become anonymous. My dad was a Marine. Up until ninth grade, I attended up to three schools a year, so I never really had friends. So I was always just back watching and never really fit in. I found out that if I had a camera, not only could I step back, but I could be protected."

Taylor wanted to send the photos to her hometown television station so they would know what had happened in New York City that day. She didn't know the nation was already stunned by news and images of the attack.

A man escorted Taylor to his office and used his computer to send her photos to KHBS/KHOG, the ABC television affiliate in Fort Smith and Fayetteville. Afterward, Taylor licensed the images through The Associated Press. While in the office sending the photos to the television station, both World Trade Center towers collapsed.

Others shot similar images, but Taylor's were unique because of the angle and timing. Taylor said she was able to get a better photo because the plane banked when it did. Had it continued on its horizontal path, there would have been more blur, she said.

She was pushing the limits of the Sony Mavica point-and-shoot camera.

Taylor said she's been told her photos from 9/11 were a turning point in "citizen journalism," when people who weren't professional journalists recorded historic or otherwise important images with personal digital cameras, and now smartphones.

In 2001, Taylor was an administrative assistant in the auditing department of Beverly Enterprises, the Fort Smith-based nursing home chain. She now runs a branding and marketing company called Really Scene by Carmen Taylor. She and her husband, Lynn, live in Fort Smith.

Taylor was a tourist that day in New York City while a co-worker was attending a conference there.

She has become close to survivors of 9/11 and to professional photographers who were working in New York City that day.

Taylor organized an exhibit of 9/11 photos in 2006 at the University of Arkansas at Fort Smith. Several photographers who documented the 9/11 disaster and aftermath went to Fort Smith for the exhibit.

Taylor regularly speaks about 9/11 to students at area schools. 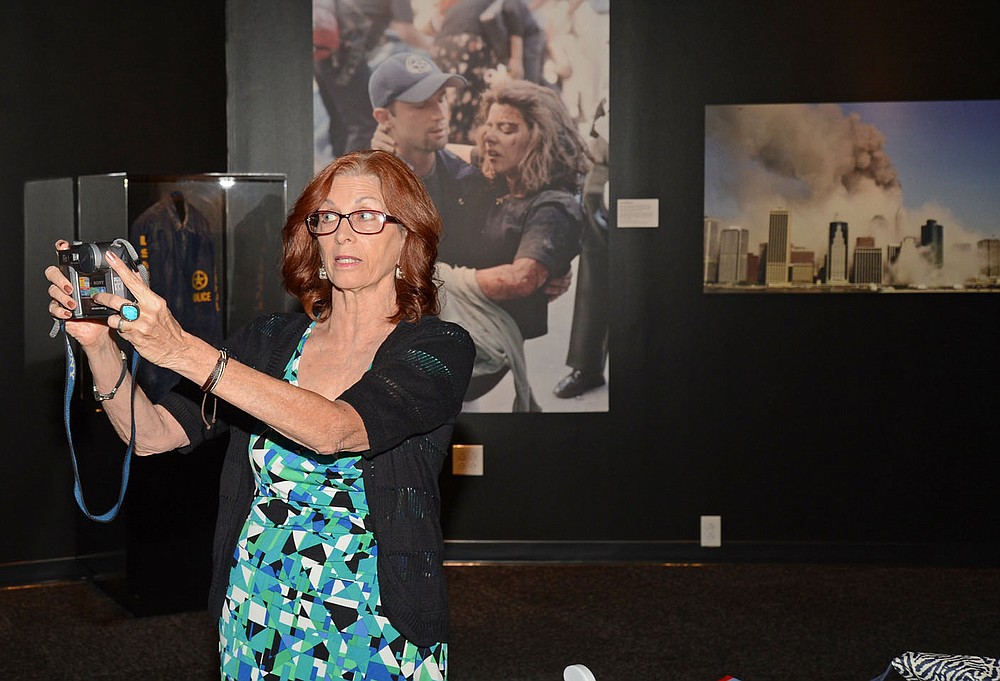 Carmen Taylor of Fort Smith talks about using her Sony Mavica digital camera to capture an image of United Airlines Flight 175 just before it crashed into the World Trade Center South Tower on Sept. 11, 2001. Taylor was at the U.S. Marshals Museum in Fort Smith where display of photographs from that day is set up. (Special to NWA Democrat Gazette/Brian Sanderford) 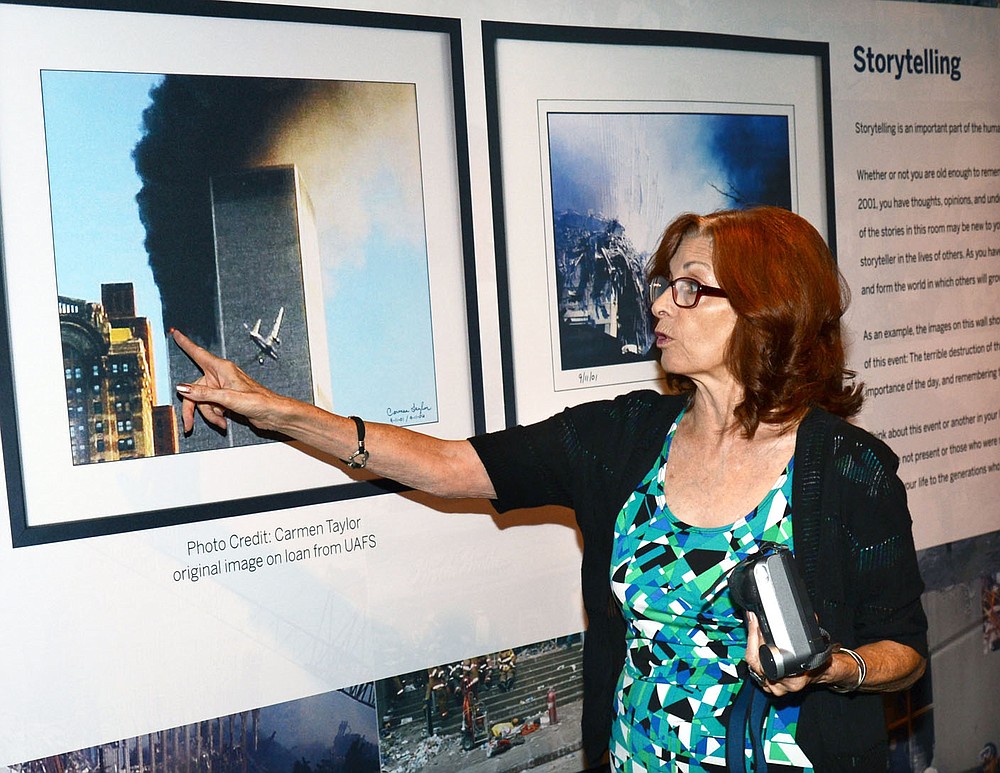 Carmen Taylor of Fort Smith describes what she first saw at the World Trade Center before capturing this image just as the second plane neared the building on Sept. 11, 2001. Taylor was at the U.S. Marshals Museum in Fort Smith where a display of photographs from that day is set up. (Special to NWA Democrat Gazette/Brian Sanderford)