Djokovic one win from Slam sweep 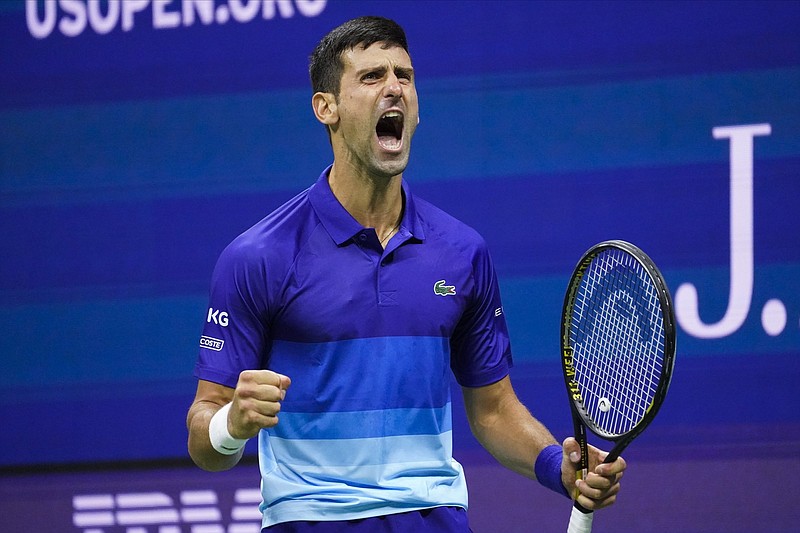 NEW YORK -- If Novak Djokovic does complete the first calendar-year Grand Slam for a man since 1969 -- and he is headed to the U.S. Open final, just one victory away -- he, and everyone else, will remember one particularly pivotal, and epic, game along the way.

It came at the conclusion of the third set of what eventually became a 4-6, 6-2, 6-4, 4-6, 6-2 victory over Tokyo Olympics gold medalist Alexander Zverev in the semifinals at Flushing Meadows on Friday night, making Djokovic 27-0 in major championships this season.

Beating No. 2 Daniil Medvedev on Sunday for the title will allow Djokovic to secure two significant milestones. He would add the 2021 U.S. Open trophy to those he won at the Australian Open in February, French Open in June and Wimbledon in July. And the 34-year-old from Serbia would collect his 21st Slam title in all, breaking the men's career mark he currently shares with Roger Federer and Rafael Nadal.

"There's only one match left. ... All in. Let's do it," Djokovic said while he spread his arms wide in his on-court interview. "I'm going to put my heart and my soul and my body and my head into that one. I'm going to treat the next match like it is the last match of my career."

That key game against Zverev featured one extended exchange after another, including a 53-shot, minute-plus point that was the longest of the tournament and actually was lost by Djokovic. Zverev delivered a forehand winner, then hunched over with his hands on his knees. Djokovic went to grab a towel. Both men were breathing heavily as most of Arthur Ashe Stadium's 21,139 spectators rose in unison on a cool, crisp evening.

But that one, tiny outcome didn't matter. Never seems to with Djokovic, especially in best-of-five-set matches on his sport's most prestigious stages. As usual, he used his superb returning and never-take-a-rest defense to wear down Zverev.

So, yes, Djokovic lost that point -- which was preceded by others lasting 13, 19, 22 and 31 shots, and followed by one that went 16 -- but he won that game, and that set with it. Just as he had lost the first set about 1 1/2 hours earlier but turned things around, with the help of a dip in level from the fourth-seeded Zverev. And just as, later, Djokovic lost the fourth set but immediately rebounded and was nearly untouchable while going ahead 5-0 in the fifth then held on.

Djokovic, who has spent more weeks at No. 1 in the ATP rankings than anyone, figures out what is required to emerge on top and does it. In each of his past four matches -- and 10 in all at the Slams this year -- he trailed by a set and won.

He equaled Federer by getting to a 31st career Slam final; Djokovic's total now includes a record nine in New York, where he has won three championships.

It will be Slam final No. 3 for Medvedev, a 25-year-old from Russia, who eliminated 12th-seeded Felix Auger-Aliassime of Canada 6-4, 7-5, 6-2 in the afternoon. Medvedev was defeated by Djokovic in this year's Australian Open final and by Nadal in the 2019 U.S. Open final.

Djokovic is trying to go 4 for 4 at the majors over the course of one season, something last done in men's tennis by Rod Laver 52 years ago. It was also done by Laver in 1962 and Don Budge in 1938. Three women have completed what's known as a true Grand Slam, most recently Steffi Graf in 1988. Serena Williams' attempt in 2015 ended at the U.S. Open with a semifinal loss to Roberta Vinci.

As Friday night's semifinal began, the 81-year-old Laver was seated front and center behind a baseline in the President's Box at Ashe.

A year ago in New York, when fans were banned because of the coronavirus pandemic, Zverev came oh-so-close to collecting his first major, taking a two-set lead and getting within two points of a championship before frittering it all away and losing to Dominic Thiem in a fifth-set tiebreaker.

Zverev came into Friday on a 16-match winning streak, a run that includes beating Djokovic in the Summer Games semifinals on July 30. That was in a best-of-three-sets format, though, which changes everything when it comes to Djokovic. He is now 36-10 in matches that go five sets.

Here's the thing about Djokovic, who occasionally rubbed his lower back with his left hand or hit his legs with his racket: Whatever the outward signs seem to say, his racket stays steady, he never stresses and he waits for the other guy to slip.

"It's kind a hurricane, a tornado, of emotions that you're going through in a sequence of one set or even one point. You are by yourself on the court, so there is no escape. You've got to find a way," Djokovic said. "And I think, over the years, I have managed to develop a formula that works for me."

Against Zverev, things really came alive six games and 20 minutes in, thanks to a terrific 24-stroke point in which Djokovic tried a drop shot. Zverev got to it, replied at a seemingly impossible angle and -- after Djokovic sprinted wide of the doubles alley and stretched to retrieve that, sneakers squeaking all the way -- came up with a winner.

The crowd went wild. Zverev raised his right hand and wagged his fingers: "Louder!" Ten minutes later, three missed forehands and a double-fault by Djokovic put him in a 5-4 hole. Zverev, a 24-year-old from Germany with a game built on power, served out that set with the help of aces at 128 mph and 132 mph, and, on the last point, a serve at 128 mph that Djokovic shanked off his frame, sending the ball into the seats.

Zverev went from six unforced errors in that set to 13 in the second, and the match was even. In the third, some loose play by Djokovic, and a backhand passing winner by Zverev, created a pair of break points. But Djokovic saved them and held to 3-2 with a forehand that clipped the baseline.

Zverev put a hand on his hip, disagreeing that the ball was in, but there is no recourse at the U.S. Open this year: All rulings come via electronic line-calling and can't be disputed. There are no line judges to doubt or to argue with.

Last year, there were, and Djokovic was disqualified from Flushing Meadows in the fourth round when a ball he hit after losing a game inadvertently struck a line judge in the throat. At the following major tournament, the pandemic-delayed French Open, Djokovic lost in the final to Nadal.

Since then, there have been deficits in Grand Slam matches for Djokovic, but no defeats. 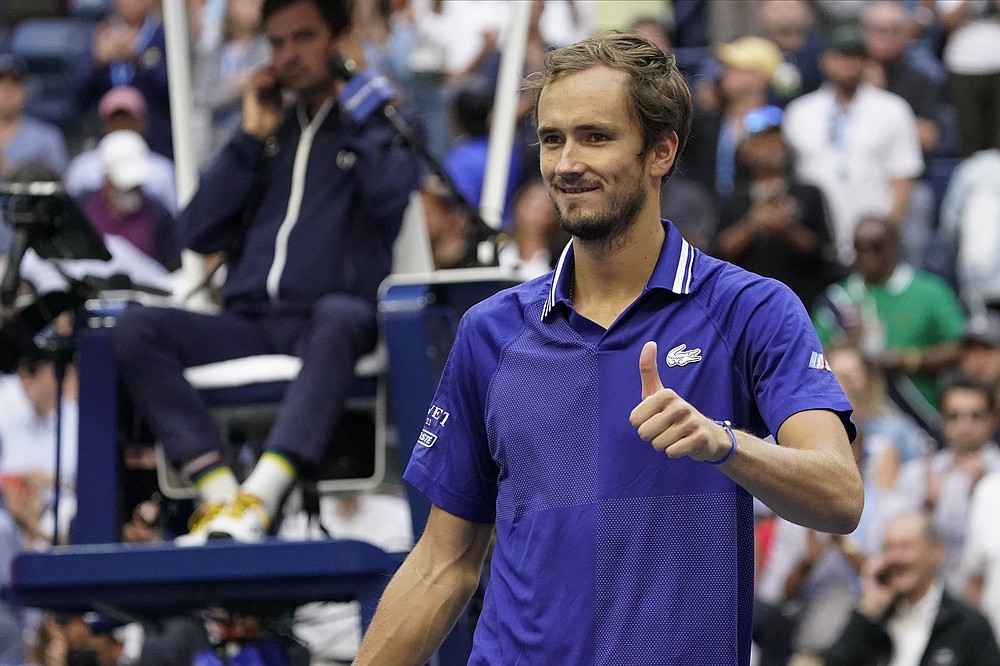 Daniil Medvedev, of Russia, reacts after defeating Felix Auger-Aliassime, of Canada, during the semifinals of the US Open tennis championships, Friday, Sept. 10, 2021, in New York. (AP Photo/Seth Wenig) 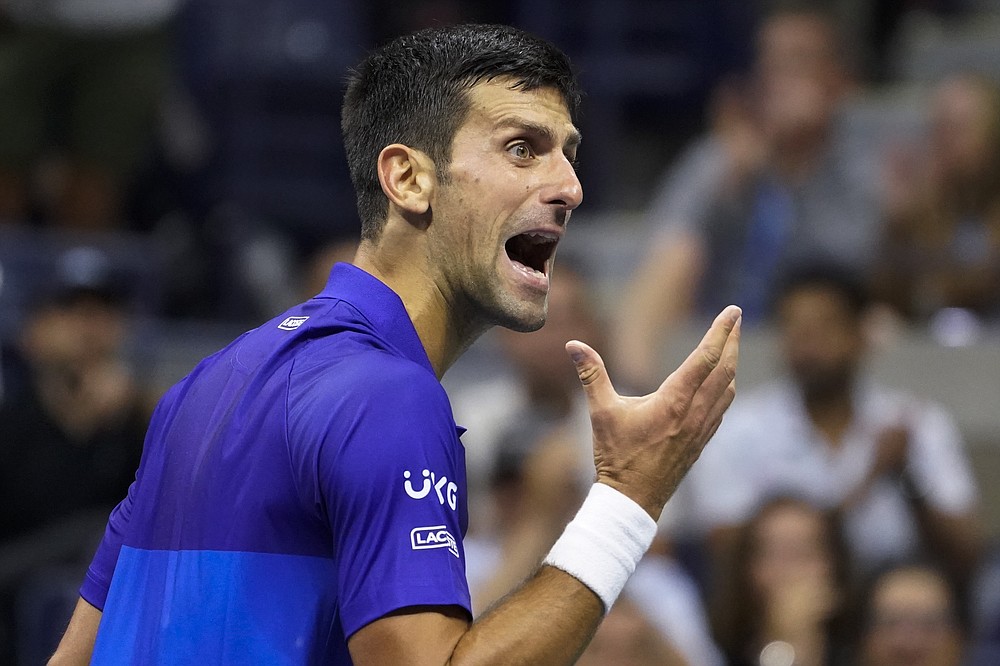 Novak Djokovic, of Serbia, reacts after losing a point to Alexander Zverev, of Germany, during the semifinals of the US Open tennis championships, Friday, Sept. 10, 2021, in New York. (AP Photo/John Minchillo) 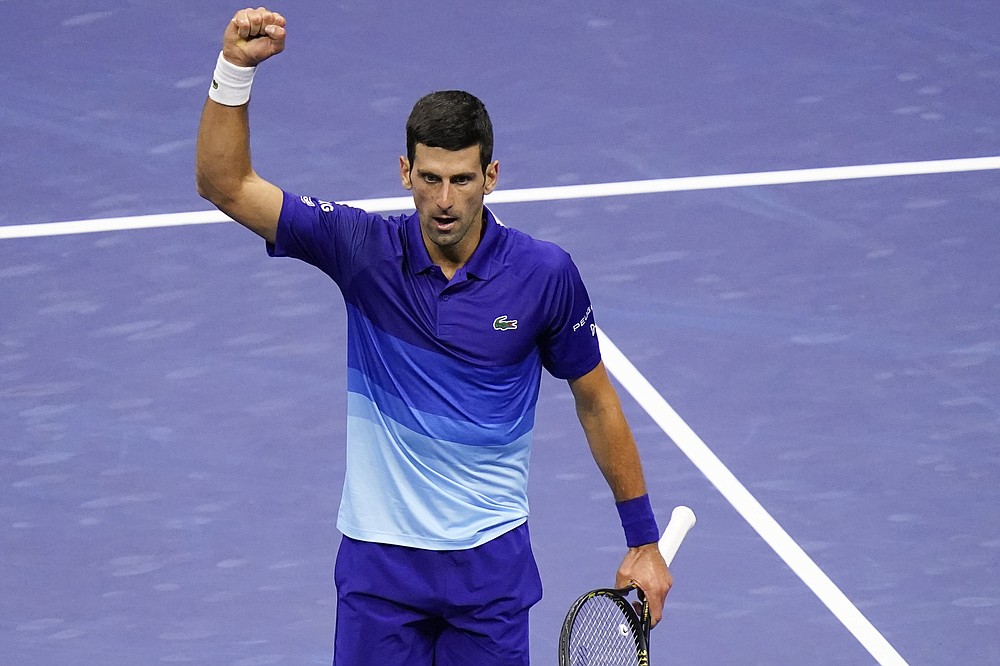 Novak Djokovic, of Serbia, reacts after winning the third set against Alexander Zverev, of Germany, during the semifinals of the US Open tennis championships, Friday, Sept. 10, 2021, in New York. (AP Photo/Seth Wenig) 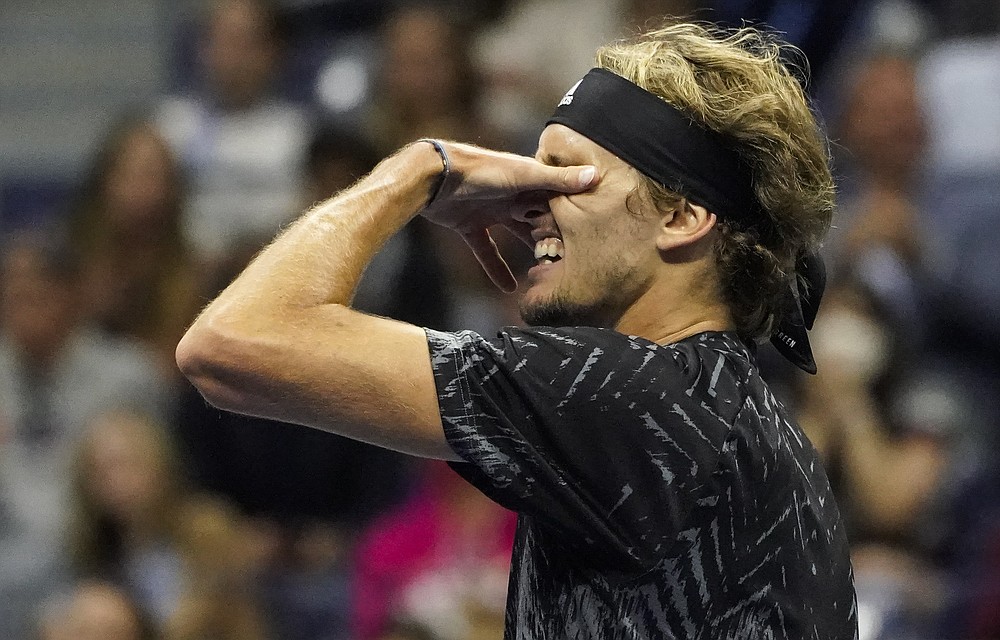 Alexander Zverev, of Germany, reacts after losing a point to Novak Djokovic, of Serbia, during the semifinals of the US Open tennis championships, Friday, Sept. 10, 2021, in New York. (AP Photo/Elise Amendola) 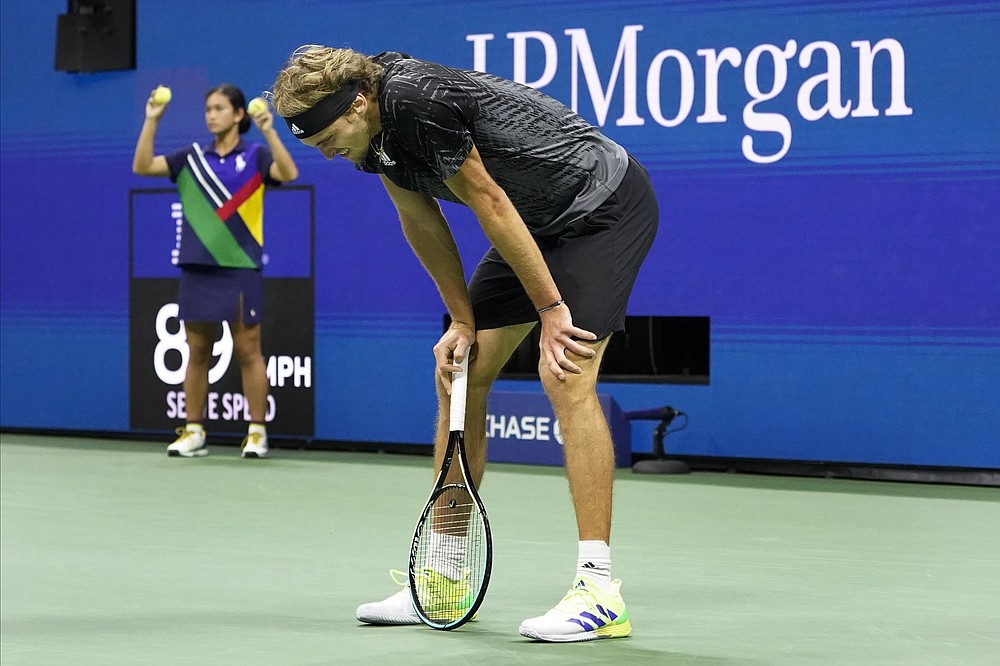 Alexander Zverev, of Germany, reacts after losing a point to Novak Djokovic, of Serbia, during the semifinals of the US Open tennis championships, Friday, Sept. 10, 2021, in New York. (AP Photo/John Minchillo) 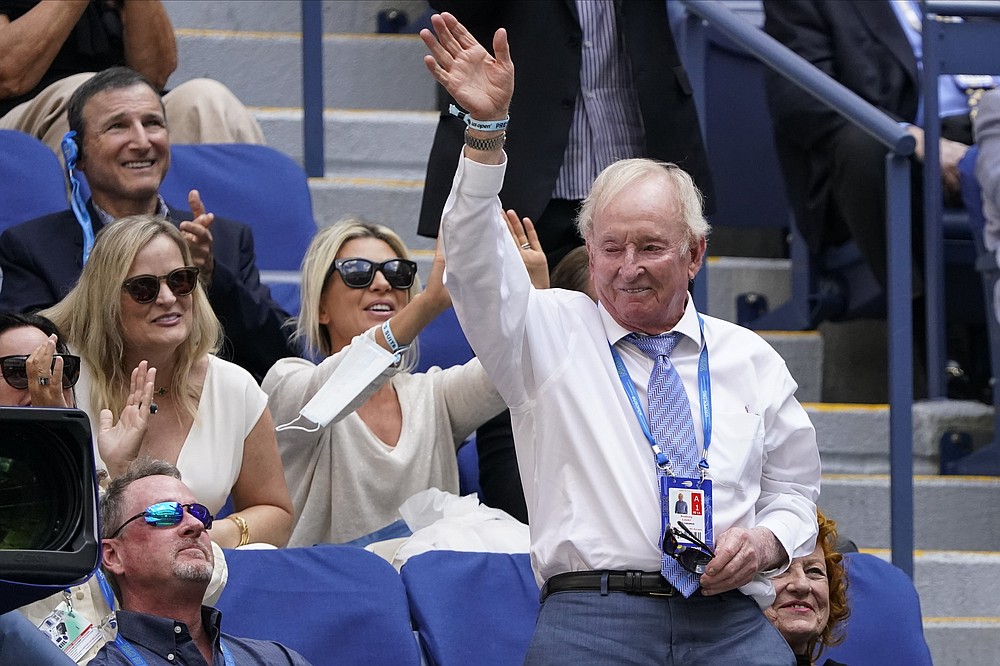 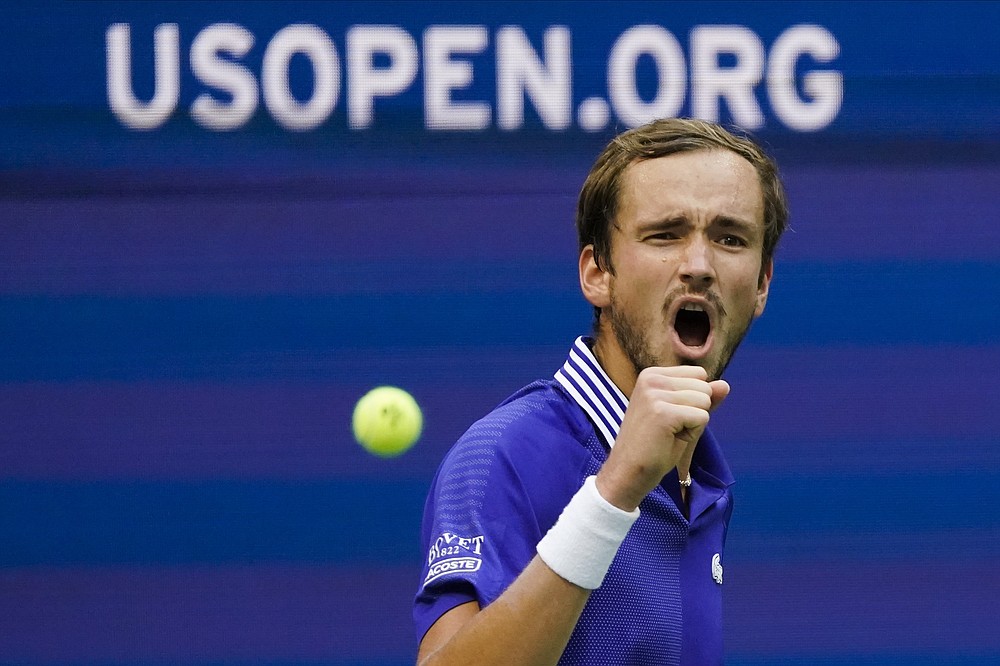 Daniil Medvedev, of Russia, reacts after scoring a point against Felix Auger-Aliassime, of Canada, during the semifinals of the US Open tennis championships, Friday, Sept. 10, 2021, in New York. (AP Photo/Seth Wenig) 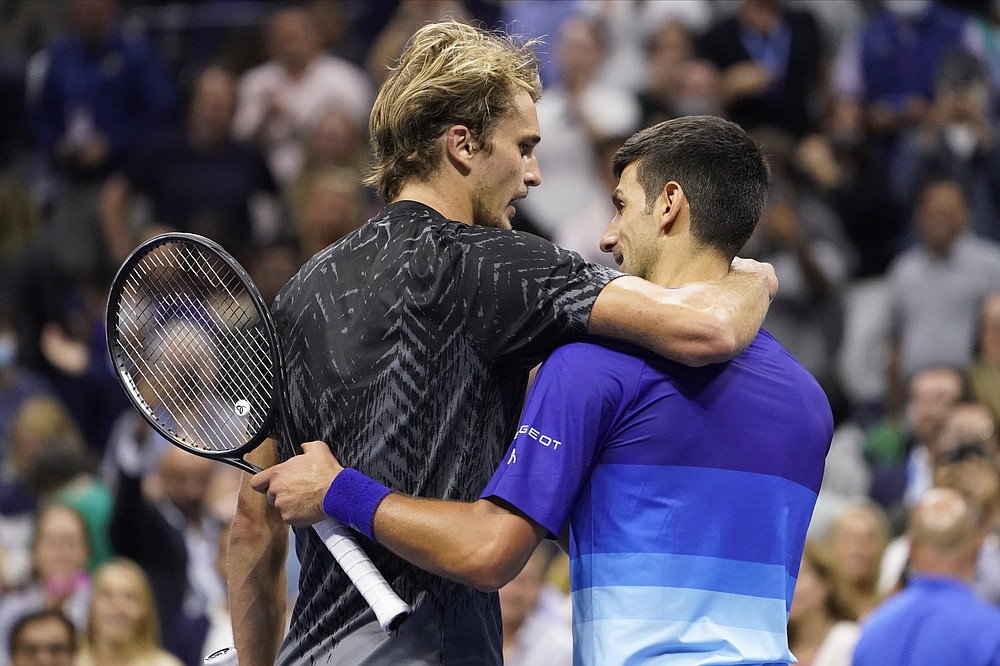 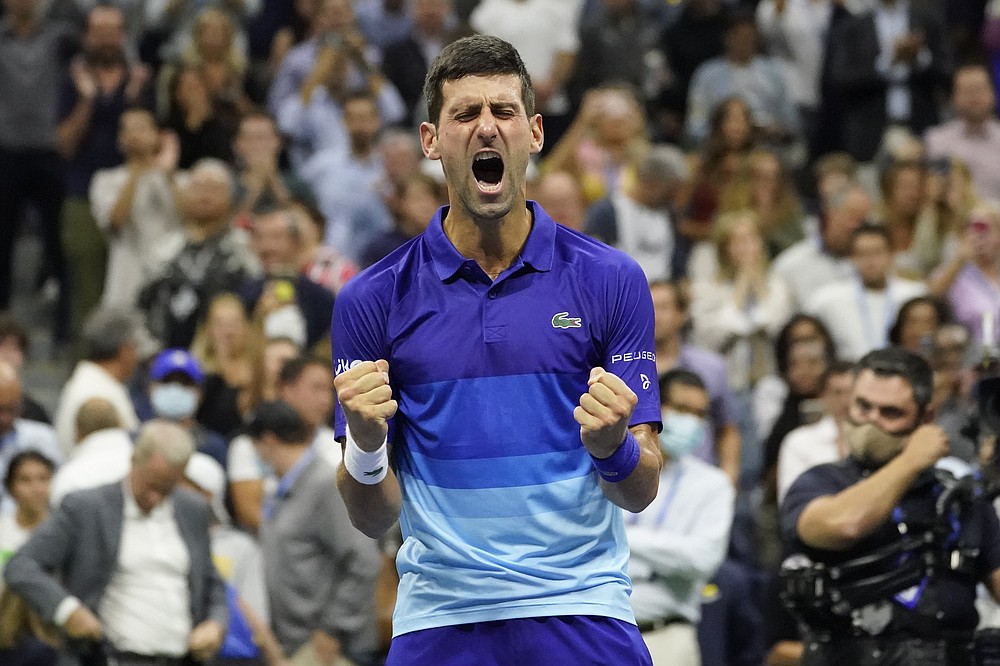 Novak Djokovic, of Serbia, reacts after defeating Alexander Zverev, of Germany, during the semifinals of the US Open tennis championships, Friday, Sept. 10, 2021, in New York. (AP Photo/Elise Amendola)