After 100 years in Central Arkansas, Fuller and Son Hardware more family than business 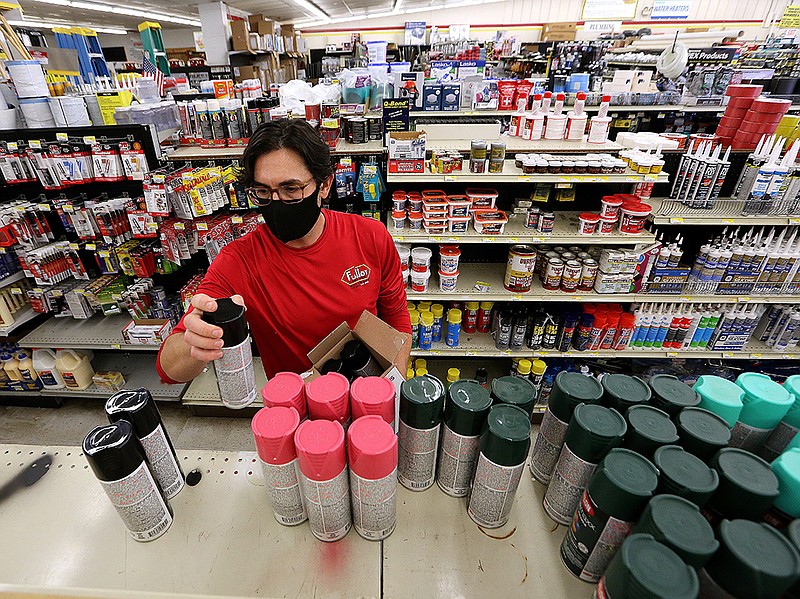 JR Fuller restocks shelves at the Fuller and Son Hardware Store on Baseline Road on Thursday, Sept. 2, 2021, in Little Rock. The family-owned business is celebrating its 100th anniversary this year. (Arkansas Democrat-Gazette/Thomas Metthe)

When Walter "Pop" Fuller opened a feed store at the corner of 28th and Arch streets in 1921, he wasn't aware that 100 years and four generations later his family would be continuing the legacy.

Since the days of horse-drawn carriages, Fuller and Son Hardware has expanded to six locations in Central Arkansas and will soon launch an online shopping option.

"Pop was 5-foot-2, 100 pounds soaking wet and decided on a business where he loaded 100-pound bags of feed," Jeff Fuller, great grandson and co-owner of the business, said Thursday. "He wasn't afraid of a hard day's work."

Jeff and his brother J.R. never met Pop. They rely on the stories told by customers who remember the first store, and on those from employees who have been with the family for multiple generations.

"We have customers come in all the time telling us that when they were little girls, they'd ride up there with their dad so they could pick out the feed bag," J.R. said Thursday. "All the feed bags were cloth and they had flower prints on it. They'd go up there and pick out the print that they wanted so that they could make dresses out of it. Of course, it was always the bag on the bottom."

The Arch Street location eventually closed and the family business over the years turned more to hardware as times changed.

Jeff Fuller said it was Pop's son, Walter Fuller, who asked the question, "What is something people need every day?"

That happened to be the basics of wood and hammers at the time, Fuller said.

Before box stores, it was J.R. and Jeff's father, Bobby Fuller, who put an emphasis on customer service. That's something the brothers say has kept them in business.

"Someone will come in and say they need a new faucet and I will ask, 'What is wrong with the old one?'" J.R. Fuller said.

If the faucet is dripping, it is possible a couple of 29-cent washers will work, he said. It could save the customer from purchasing a $130 new kitchen faucet.

"I would rather them buy that 29-cent washer a thousand times than that $130 faucet just once," he said.

The philosophy also makes the job easier for the family and staff, Jeff Fuller said.

"How would you rather spend your day?" Fuller said. "Selling hardware or helping people?"

Now 65 years old, John Adams first started working for the Fuller family when he was 17 in 1973. He remembers "Pop" visiting on Saturdays with old stories and general life advice.

"When I started, PVC pipe was in its infancy," Adams said. "There are things starting to take its place."

Adams has seen booms and drops in the building market. He's seen technology change the course of the hardware business. He's taught several Fuller generations how to use equipment at the store. He also remembers when J.R. first came to the store as a young man with who would be his future wife.

The family has become his family, he said, and the customers have became his friends.

Both Adams and the brothers moved through the store Thursday, using the first name of customers they helped.

"There is rarely somebody who walks in the store that one of our people don't already know," J.R. Fuller said.

While customer service has a deep-rooted history in the store, some things have changed over the years. A price match center is located at each store so that customers can guarantee low prices on products. Also the launch of a full shopping website is planned by the end of the year, which will allow customers to order online and pickup later in the store.

One thing that has stayed the same is the stores remain closed on Sundays. The idea started with Pop so that he could go to church, J.R. Fuller said. It continued so that employees could, if they wanted to.

The business has only been open on one Sunday. It was when tornadoes came through southwest Little Rock in the 90s.

"We knew the community needed our help so we opened," J.R. Fuller said. "Our guys that worked here just showed up. We gave away more than we sold that day."

The rest of the Sundays the store has remained closed.

"'Some money just cost too much,'" J.R. said, quoting his father.