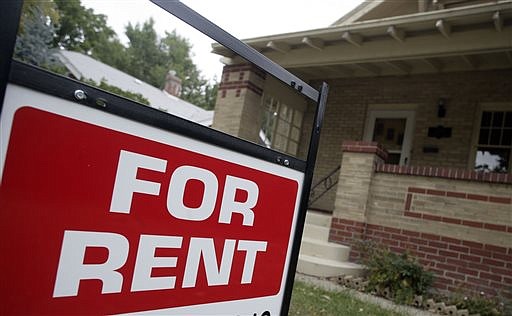 A "for rent" sign is shown at a home in this September 2007 file photo.

The county also distributed more rental assistance money by June 30 than the state-administered program for the 72 Arkansas counties outside of Benton, Washington and Pulaski.

Washington County, meanwhile, assisted half as many households during the same time, county records show. The county received $7.4 million to distribute. It split responsibility for distributing the money among three entities: the Fayetteville Housing Authority, the Springdale Housing Authority and the county itself.

By June 30, the combined efforts in Washington County had aided 498 families by a total of $1.7 million, county records show.

The Fayetteville Housing Authority distributed almost all of the money that went out in assistance in Washington County before June 30 and has distributed the rest of its $1.5 million share since the end of June, said Victoria Dempsey, acting deputy director.

The Springdale Housing Authority distributed about $500,000 by June 30 of the $1.5 million it received, records show.

Congress approved $25 billion for the program Dec. 27. It approved another $21.55 billion March 11 as the pandemic dragged on. Most of the money was allocated to states.

Benton, Washington and Pulaski counties were the only three Arkansas counties to get direct appropriations of rental assistance money to administer, being the only three counties in Arkansas to meet the population size and other requirements, according to U.S. Treasury records.

The Benton County assistance program is handled by a nonprofit group, the Springdale-based Excellerate Foundation, through a subsidiary called Hark.

Neither he nor Excellerate officials would go into detail about why the two decided not to work together.

Pulaski County distributed $1.1 million of its $11.7 million to 624 households by June 30, according to U.S. Treasury records.

Arkansas' distribution of federal rental assistance funds has been "far too slow," said the letter by Rep. James Clyburn, D-S.C. Clyburn is chairman of the House Select Subcommittee on the Coronavirus Crisis.

"By June 30, the Arkansas state rental relief program had only distributed $600,000 of the $173 million in federal funds the state has received," the letter says.

The figures in Clyburn's letter show Hark distributed more rental assistance money in Benton County by June 30 than the state did in 72 of its 75 counties by July 31.

The National Low Income Housing Coalition, a Washington-based nonprofit group, estimated Wednesday 26.2% of the $21.55 billion approved for rental assistance in March has reached renters or their landlords.

"I recognize we have ground to make up," Wood said in a statement Wednesday. "I am confident we are closing the gap by setting up a Washington County online portal through the county website and disbursing funds directly through the Washington County treasurer. We issued our first batch of checks on July 21 and have since disbursed $181,997."

The moratorium on evictions imposed by Congress -- another covid emergency measure -- expired July 31. President Joe Biden's administration tried to extend the moratorium by an administrative order from the federal Centers for Disease Control and Prevention. The Supreme Court struck the order down Aug. 26.

So renters who need Washington County's assistance would still face a race against eviction if the new county system was efficient and smooth -- and it is not, said Sarah Moore of Fayetteville. Moore is a founder of the Arkansas Justice Reform Coalition, an advocacy group.

"I've personally helped 20 people apply for rental assistance and not one has seen a check yet" to either them or their landlord through the Washington County system, Moore said.

Jennifer Hall successfully completed the Washington County process, but it took her five or six attempts, the Fayetteville resident said in a telephone interview Thursday. She and her wife didn't need the assistance until recently, she said. The Fayetteville Housing Authority had distributed most of its money by that time.

She already had requested documents such as her most recent tax return in electronic form. She still found the system difficult to work with. Problems included a short timer on uploading documents such as an electronic copy of a lease agreement, she said. Not getting it in before the site timed out meant starting all over, she said.

"I do think it's getting better," Hall said. "They're getting the bugs worked out."

She knows because she followed up her application with telephone calls to the county program's customer support number. She recorded some of those conversations and posts them on her Facebook page, which is under the name Jennifer Rose.

Hall started her application attempts July 21, the first day the county-run system opened, and received notice she had successfully completed the application process July 22, she said. The application is in the name of her wife, Melanie Schnebelen.

Hall got a confirmation notice Aug. 18 her application was approved and she would receive money within the next five to seven business days, Hall said. The money would have gone directly to her landlord, but he had not signed up to participate in the rental assistance program. In most cases, program payments go directly to landlords.

Aug. 18 was 11 business days ago on Thursday. No money has arrived yet, Hall said Thursday. Also, the notice did not give a dollar amount of how much money was approved, she said.

The county is improving the system, Wood said.

The county is late in its efforts to reach people whose primary language is not English, Moore said. The county-run website arrived solely in English, yet the primary language of many people needing the assistance was Spanish or Marshallese, she said.

Volunteers familiar with the county's system who help applicants need between 30 and 45 minutes at a minimum to complete the process, Moore said. This demand on their time sharply limits how many applicants volunteers can help, she said.

The process went much more smoothly in Benton County, according to both County Judge Barry Moehring and Jeff Webster, president of Excellerate.

Bentonville resident Erica Kelley praised every aspect of the assistance she received from Hark.

"I'd never been unemployed for more than three months in 17 years as an industrial engineer," said Kelley, a University of Arkansas graduate. Then covid hit. Suddenly she found herself laid off from her job at Walmart, she said. Now she's been out of work for a year and a half.

Not only was the initial application for aid a smooth process, Kelley said, but messages she leaves with Hark are returned within five minutes and an answer to her questions provided within 15 or 20 minutes, she said.

"They have a great computer system, but what really matters is their people," she said. "They know what they're doing."

Kelley's aid was received by her landlord within a week of her first application.

Moore also praised Hark for putting so much information about its rental assistance spending on its website. The website shows the demographics of who receives the aid, income levels and what cities they live in. Washington County has nothing like it, she said.

Benton County officials realized the money was available but -- like most U.S. counties -- they had no system to administer such assistance, Moehring said in an interview. It has no existing means of processing applications, verifying them and issuing the aid, he said.

An Excellerate staff member keeps an eye out for federal assistance this region is eligible for and informed Webster of the rental program, the foundation president said.

"To make a long story short, we wound up on a call with Judge Moehring, and we said there's $8.4 million in rental relief related to covid that you're eligible, given the size of the county, to apply for, and we think you should apply for it."

County officials were already aware, Webster said, but replied: "The challenge is, we don't have the ability to distribute it," according to Webster.

Excellerate has a distribution system. The previous year the group distributed $2 million of similar assistance provided by the Walton Family Foundation and Excellerate's own resources, Webster said.

"We distributed it much the same way, with very detailed internal reporting if you will, paying money directly to the landlords," he said.

The foundation also has Marshallese and Spanish speakers on staff. They quickly translated the needed forms into those languages, he said.

Excellerate and Hark were already familiar with writing the needed software to meet all the federal requirements, Webster said.

"Everyone gets connected to a client service rep to walk them through that," he said. So while Hark's process is technology-based, those who need help navigating the system can, for instance, take a picture of some of the documents required to complete the process and have a tech-capable staffer upload the information.

"We've made YouTube videos on how to do all this stuff," Webster said.

Excellerate monitors the filing of eviction cases in county courts in Benton, Washington and Madison counties.

"In that process, we've found about 50 property managers we hadn't worked with," he said, adding they did not know the assistance program was available.

Moehring said the county is very satisfied with the results.

"They're the experts on helping people in need. We just got out of their way," Moehring said.

The county must provide oversight and make sure all required reports are filed to the federal agencies, Moehring said. The county also cooperates with Hark on public awareness about rental assistance through social media and other announcements, he said.

"We wake up every day saying 'We have to find them. They may not know we exist,'" Webster said of finding people in need of rental assistance.

To date, rental assistance has gone to more than 400 property managers in Benton County, Webster said. Hark tried to make sure no single property manager got a disproportionate part of the benefit, he said.

"A lot of these folks as part of their retirement bought some little four-unit apartment complex," he said.

Webster noted a lot of the applicants had never needed assistance before.

"Just all of a sudden, I think they're stunned when covid hit them. 'What do you mean I'm unemployed? I've never been unemployed.'"

In some cases, people who worked in good jobs found themselves suddenly without that job while also obligated to a yearlong lease on where they were living.

"It's a different population than what you think of as needing help," he said. "They've gone through their savings. The money they set aside for their children's college, they've used that money up."

Benton County "is in a prosperous area, but there are discrete and distinct pockets of need," he said. "There are also people who were doing fine until they got sick and lost income." 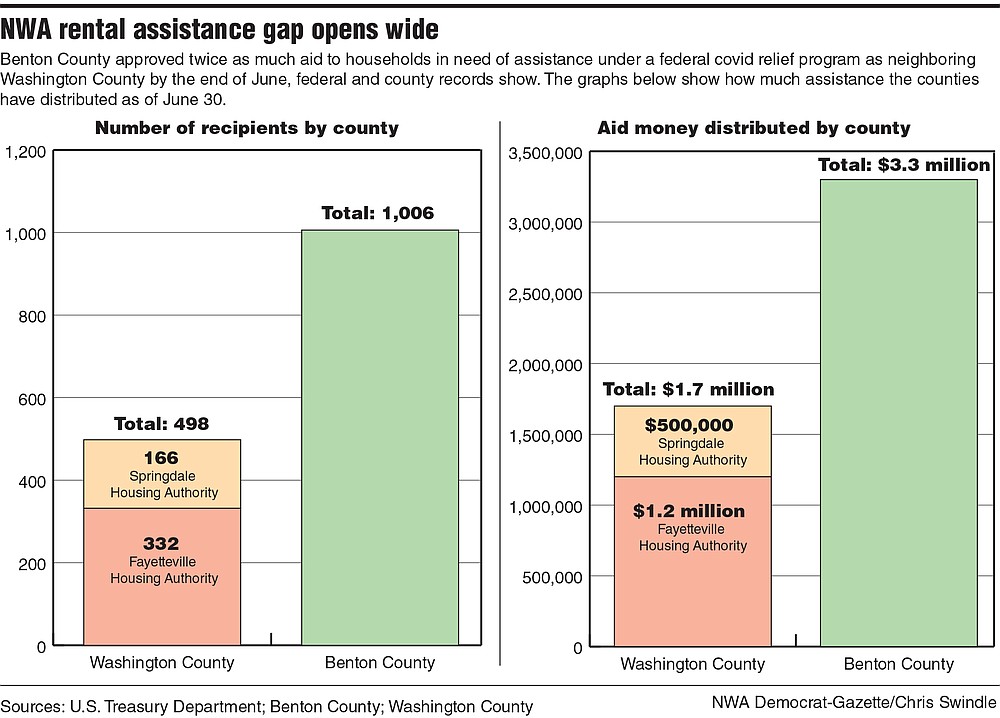