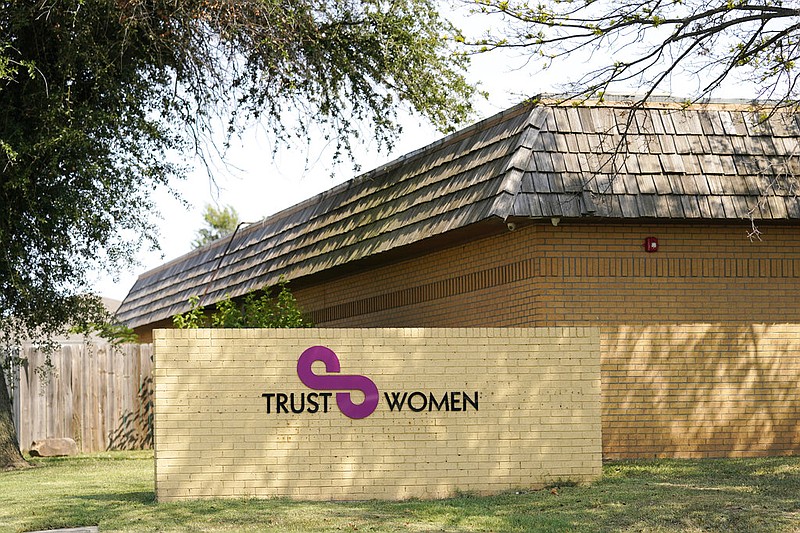 Days before the U.S. Supreme Court cleared the way to effectively end abortion in the state, a truck rolled through parts of west Texas bearing a billboard with a message in English and Spanish: "Missed period? There's a pill for that."

Behind its three-day journey through college campuses was a national nonprofit called Plan C, whose mission is to increase access to abortion pills and information on how to get and use them. While Plan C says such guidance is needed more than ever in Texas now that the state has banned most abortions after six weeks, pregnant Texans soon will face another hurdle: The state is about to ban medication abortions.

"We absolutely expect to see an increase in inquiries to our website in Texas," as well as more requests for abortion pills from other sites that sell them, said Plan C co-founder Elisa Wells.

The Texas law takes effect during major shifts in American abortion care: Rather than a procedure, patients are increasingly choosing mifepristone and misoprostol, approved by the U.S. Food and Drug Administration for up to 10 weeks into a pregnancy.

The coronavirus pandemic and its dramatic rise in telemedicine has accelerated the move toward "medication abortions" using virtual visits, so the patient never has to leave home. "The standard of care with respect to abortion care changed almost overnight because of the pandemic," Wells said.

In recent months, a handful of services have cropped up to offer tele-abortions, including Hey Jane and Abortion on Demand, which works in 20 states. Nonprofits such as Just the Pill also have started up.

But they can't work in Texas or states with similar laws: 19 ban telemedicine abortions, and Texas lawmakers have gone one step further and explicitly prohibited providers from mailing pills. The latter bill, passed last week by the Legislature, is on the desk of Gov. Greg Abbott.

Texan patients seeking to avoid the new laws' restrictions could cross state lines for care at a clinic -- or get to a state where remote abortions are allowed.

Logan Green, the chief executive officer of Lyft Inc., said Friday that the ride-hailing company would fully cover legal fees for any of its drivers sued under Texas' new law. Green urged other companies to join its efforts; soon after, Uber followed with a similar promise.

Hey Jane, a startup virtual clinic, offers abortion support including remote medical visits and overnight delivery of medications. It's racing to get up and running in New Mexico and Colorado to serve Texas patients in those states, co-founder Kiki Freedman said.

"The way telemedicine laws work, it's based off the patient's physical location," she said. So patients would just need to travel to those states -- ideally with help on transport, food and lodging -- and once there, "talk with the provider through digital channels, get the medications and take them."

For years, telemedicine abortion was hampered by legal issues, Freedman said, but federal regulators under the Biden administration have been supportive. And the permissions granted only for the pandemic could become permanent.

"The more hostile states are only getting more hostile," she said, so it has long been clear that "setting up operations in adjacent states would be really important."

Efforts in the rural Midwest could presage what happens near Texas. Just The Pill, a Minnesota nonprofit that aims to increase abortion access in rural areas, also serves patients from bordering states.

If South Dakota patients live too far from a clinic that provides abortions in Fargo or can't wait for an appointment there, they often will cross into Minnesota, said Just The Pill medical director Julie Amaon.

They arrive "once to have their telehealth visit with one of our doctors (the patient must be inside state lines to comply with state laws)," she said in an email. "And then they will return two days later to pick up their medications."

The Minnesota nonprofit has been "shocked to see requests from patients willing to fly or drive from Texas to Minnesota to access medication abortion," she said, but Just The Pill at this point isn't treating those patients.

It is, however, considering a plan to set up mobile clinics on the border with states that pass laws like the Texas ban, so patients would be able to see a doctor in person and get the medications in just one trip. "We want to remove as many burdens as possible for patients," Amaon said.

Other patients may resort to alternative -- and legally risky -- ways to get the pills.

Plan C informs its website's visitors about telehealth abortions but also options with potentially shakier legal foundations, including an international telehealth service called Aid Access and online pharmacies that will send abortion pills to U.S. customers from abroad. The site includes a category of "creative options," including setting up a mailbox in a state that allows remote abortions and giving that address to a medical provider. It also offers a legal help line so patients can assess the risks of various options.

The current situation in Texas, with anti-abortion activists celebrating the law that bans most abortions in the state, sidestepping Roe v. Wade for now, and women wanting abortions seeking new ways to get access to care, has its origins in a town called Waskom, population 1,600.

Texas' abortion law S.B. 8 follows a model first used in Waskom to ban abortion within its boundaries in 2019. The novel legal approach used by the city on Texas' border with Louisiana is one envisioned by a former top lawyer for the state.

The ordinance shields Waskom from lawsuits by saying city officials can't enforce the abortion ban. Instead, private citizens can sue anyone who performs an abortion in the city or assists someone in obtaining one. The law was largely symbolic, however, because the city did not have a clinic performing abortions.

Nearly three dozen other cities in the state followed Waskom's lead. Among them is Lubbock, where a Planned Parenthood clinic stopped performing abortions this year as a result.

Mitchell has declined interviews, but Dickson called him a "brilliant guy" and said he was "extremely grateful" for his help. Hughes, who later became the author of the Texas law, echoed those sentiments. The two have known each other for years.

Though Hughes would not assign credit for Texas' approach to a single person, saying many lawyers and law professors advised on the legislation, ultimately S.B. 8 followed the Waskom model in terms of how the law is enforced.

Like the Waskom law, S.B. 8 prohibits state officials from enforcing the ban. Instead, it created a so-called private right of action allowing anyone -- even someone outside Texas -- to sue abortion providers and anyone else who helps someone get an abortion. Under the law, anyone who successfully sues another person would be entitled to at least $10,000.

Mitchell, 45, has spent the past 15 years moving back and forth between working in government and teaching at law schools such as Stanford and the University of Texas at Austin. A graduate of Wheaton College and the University of Chicago Law School, he was a law clerk to the late conservative Supreme Court Justice Antonin Scalia.

And he went on to serve as Texas solicitor general from 2010 to 2015. He was a volunteer attorney on former President Donald Trump's transition team and was unsuccessfully nominated by Trump to lead an agency that would have the job of making the government work better.

A law review article Mitchell wrote that was published in 2018 gave guidance to lawmakers worried about courts blocking their laws. He said lawmakers could protect their legislation by including a private right of action. He said the strategy could apply to a wide range of laws such as campaign finance, gun control and abortion.

"It is practically impossible to bring a pre-enforcement challenge to statutes that establish private rights of action, because the litigants who will enforce the statute are hard to identify until they actually bring suit," he wrote in one footnote.

In the case of Texas' law, things have played out as he predicted.

GOP lawmakers and abortion opponents in at least five other Republican-controlled states -- Arkansas, Florida, Indiana, North Dakota and South Dakota -- said they are considering pushing bills similar to the Texas law and its citizen-enforcement provision.

When Texas lawmakers advanced a restrictive voting-rights bill this year, American Airlines and Dell Technologies, two of the state's biggest employers, were early and vocal critics of the effort.

But last week, when the restrictive abortion law took effect, both companies declined to comment on the measure.

Abortion is one of the country's most politically and emotionally charged issues, and as much as 40% of the American public supports outlawing or severely restricting it, according to the Pew Research Center. Opposition to abortion often cuts across demographic groups, and most executives would be reluctant to take a public stand that was likely to anger or alienate a large group of customers and employees whatever they said.

"No one is going to walk willingly through this door," said Sandra Sucher, a professor of management at Harvard Business School. "If I'm a business making a political calculus, it's just a matter of who I'm going to p* off."

Two dozen major companies contacted Friday by The New York Times either did not reply or declined to comment. Among those that would not say something were McDonald's, a sponsor of International Women's Day; PwC, a major supporter of diversity and inclusion efforts; and Coca-Cola and Delta Air Lines, which led a corporate backlash last year against a restrictive voting bill in Georgia, where they have their headquarters.

Many of the biggest employers in Texas, including AT&T, Oracle, McKesson and Phillips 66, declined to comment. Even companies that are quick to speak up on social issues, including Patagonia and Levi's, did not say anything about the new law. And Catalyst, a nonprofit organization that teams up with big companies to "build workplaces that work for women," declined to comment.

"When all of these companies who participate in things like International Women's Day won't speak out on reproductive health care, it shows that they care about the bottom line, not what women need and want," said Lindsey Taylor Wood, CEO of The Helm, a venture-capital firm that funds female founders.

But Elizabeth Graham, a vice president of Texas Right to Life, a group that backs the law, said it would be good for business in the state, claiming that a majority of people there are "conservative and pro-life."

Abbott has said that it would not hurt the state economically, including its long-standing efforts to get businesses to move there from higher-cost and more liberal parts of the country like California and New York. He argued that some employers would be drawn to the state because of its conservative laws, citing Elon Musk, who runs Tesla and SpaceX, as one such executive.

But while most executives have stayed quiet, a few have spoken out.

Bumble, the dating app company founded by Whitney Wolfe Herd and based in Austin, said that it was donating funds to organizations that supported women in Texas seeking abortions.

"Bumble is woman-founded and women-led, and from day one we've stood up for the most vulnerable," the company said in an Instagram post. "We'll keep fighting against regressive laws like #SB8."

Information for this article was contributed by Carey Goldberg and Catarina Saraiva of Bloomberg News (TNS); by Jessica Gresko and Paul J. Weber of The Associated Press and by David Gelles of The New York Times.