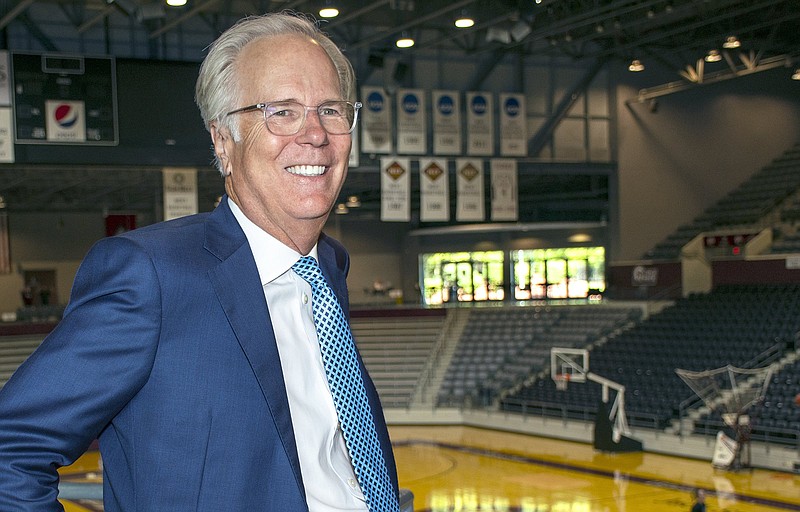 “I feel fortunate to sit where I sit and work where I do. I don’t consider myself a great sage. With the market, I read what everybody else is reading. You have to be honest. You have to know what kind of risk you can take.” -Warren Simpson (Arkansas Democrat-Gazette/Cary Jenkins)

Warren Simpson has no problem admitting that as an athlete he's pretty much a dud.

Simpson and his wife Cindy are being honored at the 13th-annual SpectacUALR, a benefit for UALR athletic programs Oct. 7 at UALR's Jack Stephens Center. This year's SpectacUALR event is being presented by Dillard's, Harriet C. and Warren A. Stephens, Becky and Gus Blass and Rick Massey. The SpectacUALR will feature casino games along with silent and live auctions. All proceeds support Little Rock student-athletes directly.

Simpson has made his mark in the high-contact sport of investments. He's executive vice president of Stephens Inc., managing director of Stephens Capital Management and a member of the StephensChoice Investment Committee. He has worked for Stephens since 1987.

"Warren has been a tremendous friend and supporter of Little Rock athletics and our university. We are thrilled to have the opportunity to honor Warren and Cindy for their service and what they have meant to UA Little Rock," says UALR's director of athletics, George Lee. "Warren played an instrumental role in making the Jack Stephens Center become a reality. I still remember it like it was yesterday, Warren, myself, then men's basketball head coach Porter Moser, Chris Peterson along with Warren Stephens toured the fieldhouse on campus. At the time the discussion was to renovate it for us to play in. During that visit is where the idea of a brand-new arena came about and that doesn't happen without Warren being such a strong advocate for our program."

Simpson is an enthusiastic fan of all sports and that includes the teams and athletes playing for the UALR Trojans. That said, he sees raising money for UALR athletics as doing more than just benefiting the college.

"What is good for UALR is good for our city," Simpson says. "Dr. Ted Bailey, who I consider my second dad, was really who got me involved with UA Little Rock. He knew that this university serves as a strong economic engine for the economy and health of our city. He instilled that importance in me. We need to make our cities the best we can. I love the basketball there. I've been involved over there for a long time."

Athletic ability isn't Simpson's strong suit but he has forged strong bonds with notable athletes. This came about thanks to his four years as director for investments for Stephens Sports Management. That's where he struck up a friendship with current head UALR basketball coach and NBA veteran Darrell Walker.

"We became friends back when he started managing my money," says Walker of Simpson. "We stayed friends all these years. ... We're both hyper as hell. We both have outgoing personalities. He's done a lot of things for [UALR]. What he's done is invaluable. He's my go-to guy."

Although he's not an only child, Simpson's lone sibling, a brother 18 years older, was mostly out of the house as Simpson grew up.

"I was a surprise for my family," Simpson says. "My mother was 43 years old when I was born. She had had several miscarriages before I came along."

One of Simpson's first memories is tagging along as his active mother ran her daily errands.

"She said, 'Hang on to my dress, we have a lot to do today,'" Simpson recalls. "That is one of my first memories. I would go places with her. You can just see me, a little ol' bitty fellow hanging on. We would go all over the place. We would go eat lunch at Franke's downtown. She was a very optimistic person."

Simpson doesn't hesitate in his praise for his parents. His mother worked at home and his father was a businessman, serving as vice president and treasurer of the Tuf Nut Garment Manufacturing Co. before working at American Savings and Loan and then sitting on the board of Capitol Savings and Loan.

"I had great parents," Simpson says. "They were two of the finest people. Even though he was older, I was close to my brother. I looked up to him. But when I was young, I would get home after school and have a snack and talk to my mother. We would have dinner together almost every night, just me, my mom and my dad."

'OUTSIDE ALL THE TIME'

Fond memories of growing up extend for Simpson to his Little Rock Heights neighborhood on Longfellow Lane. Neighborhood pickup games -- baseball and football -- ruled his days.

"I was outside all the time," Simpson says.

"He was the football coach there at that time but I was not good enough or big enough to play football. He was really good to me. He took a liking to me. Coach Ripley helped me in my love of sports."

By the time Simpson was enrolled in Catholic High School, he made the golf team for the all-boys school. He had a passion for sports but wasn't sure where his life was going to take him.

"There was no doubt I was going to college," Simpson says. "I was going, period -- no ifs, ands or buts. I was told really early that I was going and I wouldn't be doing the five-year program. I would go and finish in four years. That was fine by me. I wanted to get in college."

The problem? "I wasn't good at anything," Simpson says.

The teachers and coaches at Catholic guided and motivated Simpson. He cites a coach who got him through trigonometry in the 11th grade. Then there was Principal Father George Tribou.

"We all knew who the boss was at Catholic," Simpson says. "There was no gray area. He was funny. He had a great sense of what was appropriate. He knew what a serious offense was and what didn't rise to that level."

Southern Methodist University in Dallas has a lot of qualities to attract potential students. For Simpson, there was a winning quality to SMU that wasn't mentioned in the brochures and pamphlets the college sent out to lure in potential students.

"I went with my friend to look at the school," Simpson recalls. "We were standing in front of Dallas Hall. It wasn't long before all these beautiful women started rolling out. I turned to my friend and said, 'I think this is where I want to go.'"

Simpson and his friend did enroll and attended SMU.

"I got a good education and had a great time," Simpson says.

As for what he would major in at SMU and what he would pursue after his degree, it turned out Simpson didn't stray away from family interests.

"I was always interested in business," Simpson says. "I didn't know what kind of business I would be involved in. I took an interest in being a stockbroker. My brother was working for Stephens Incorporated at the time. I decided that that is what I wanted to do."

Simpson returned to his home state to earn an MBA from the University of Arkansas. By 1982 Simpson was working for A.G. Edwards as a stockbroker.

"The learning curve is large," Simpson says. "The challenge of making a good decision for the money that's been entrusted to you is significant. I liked the challenge. I'm a pretty hyper person. The market is a hyper place. I like the fast pace of it all. I enjoyed that immediately. It was a career for me."

It wasn't six years into his career as a stockbroker when Simpson was face-to-face with his first stock market crash.

"That was terrible," Simpson says. "It was no fun. 2007 was pretty bad as well but in 1987 I was relatively new to the business and had never seen anything like it. It was really tough. I was trying to sell [stocks] to institutions that were not buying. You felt too scared to do anything."

The stock market and the U.S. economy would eventually recover and rebound. For Simpson, the crash was a reminder of something his father had said to him earlier.

"Be prepared for failure, nobody hits 100%," Simpson says. "You have to work hard and tell the truth. Don't ever think you are smarter than you are."

It's pretty clear that lessons from the crash pushed Simpson in a conservative direction when it comes to managing the assets of his clients. When he was director of investments for Stephens Sports Management from 1990 to 1994, caution was his watchword.

"Our clients in the Sports Management side had already hit a home run with their finances," Simpson says. "We were very much in the protection mode."

Simpson can thank a niece for setting him up on a date in 2003 that would become a relationship and later a marriage.

Of his wife Cindy, Simpson says, "I immediately knew she was a kind person. It was a quality my mother had instilled in me to look for. That was it."

When Simpson is not at work, he can usually be found on a golf course or working out. He also enjoys duck hunting.

"I do enjoy duck hunting even though I am not very good at it," Simpson says.

"I'm surrounded by a lot of talent," Simpson says. "I feel fortunate to sit where I sit and work where I do. I don't consider myself a great sage. With the market, I read what everybody else is reading. You have to be honest. You have to know what kind of risk you can take. I expect our employees to have the utmost integrity when dealing with our clients. Integrity means there is no gray area when it comes to honesty. I expect all of us to work hard every day."

THE PLACE WHERE I CAN GET AWAY FROM IT ALL: The golf course or fitness center.

WHAT KEEPS ME MOTIVATED TO VOLUNTEER MY TIME: My parents instilled the importance of giving back to the community. When it came to volunteering, they taught me more by example than by word. At 64 years old, I certainly am a firm believer in the old adage that “it is better to give than to receive.”

I AM MOST RELAXED WHEN: I am home.

A GREAT MEAL MUST INCLUDE: A dessert!

THE KEY TO INVESTING IS: Understanding the risk of the investment and what your own risk tolerance is.

FOOD I WILL NOT EAT UNDER ANY CIRCUMSTANCES: Okra.

MY FOUR GUESTS AT MY FANTASY DINNER PARTY: My parents and my two grandfathers, James D. Simpson, who died when I was 4 and whom I have little memory of, and Joseph Warren House, who died the year before I was born.

ONE WORD TO SUM ME UP: Grateful 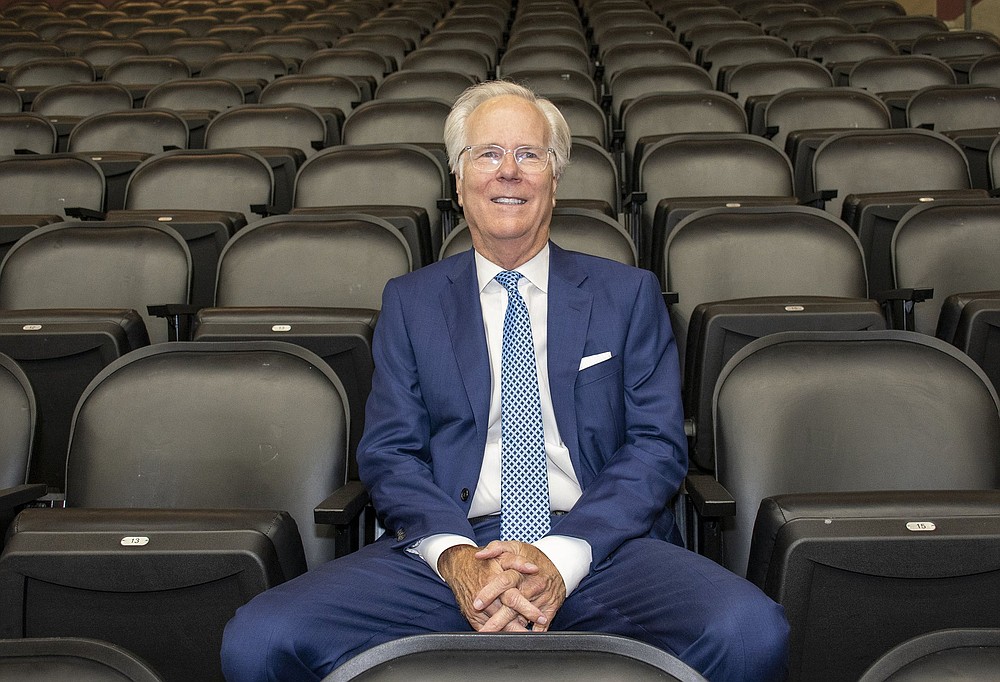 The challenge of making a good decision for the money that’s been entrusted to you is significant. I liked the challenge. I’m a pretty hyper person. The market is a hyper place. I like the fast pace of it all. I enjoyed that immediately. It was a career for me.” -Warren Simpson (Arkansas Democrat-Gazette/Cary Jenkins)