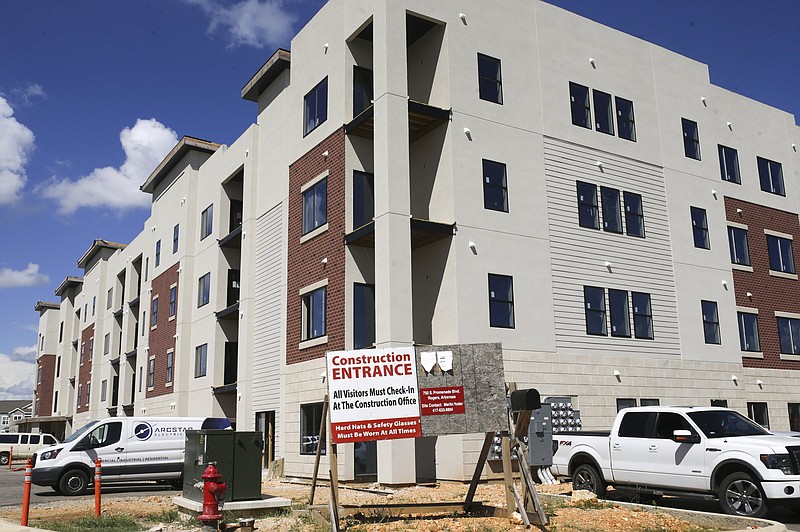 Construction is shown, Monday, August 30, 2021 at the Promenade Commons in Bentonville. The sale price of single-family homes in Benton and Washington counties soared during the first half of 2021 and apartment vacancy rates tightened up, according to the most recent Arvest Bank Skyline Report.(NWA Democrat-Gazette/Charlie Kaijo)

The sale price of single-family homes in Benton and Washington counties soared during the first half of 2021 and apartment vacancy rates tightened up, according to the most recent Arvest Bank Skyline Report released Tuesday.

The total number of homes sold -- including new and previously owned homes -- during the six-month period was 4,757, the fifth highest amount since the Skyline report began back in 2005.

When compared with the same period a year ago, building permit values rose 5% and were up nearly 22% when compared with data from five years ago. Homes were on the market less than 90 days on average, the shortest time period since the report began.

Mervin Jebaraj, director of the Center for Business and Economic Research at the Sam M. Walton College of Business at the University of Arkansas, said in an interview Tuesday that the covid-19 pandemic has supercharged housing prices in Northwest Arkansas. He said the region's population grew while not enough homes were being built, creating high demand in an environment of historically low mortgage rates. As a result, those who could afford to began buying up homes as quickly as possible.

Jebaraj said many of the newcomers to the region, about 40%, come from other areas in Arkansas where housing prices haven't grown as rapidly, making it hard to afford a home in Northwest Arkansas, even if they have one to sell in another part of the state.

"The difference in prices is immense," he said.

Jebaraj said the most recent Skyline report raises concerns in the long-term about affordable housing in the region -- one of the factors that makes the area so attractive as a place to live and work. He said one solution going forward is for cities in Benton and Washington counties to consider wholesale changes in their building, planning and zoning codes that will allow for denser construction of single-family homes.

According to the report, vacancy rates in multifamily housing dropped to 3.4% during the first half of the year, down from 5% during the last half of 2020 and from 4.8% for the corresponding period a year ago. Vacancy rates for the period were down in all the main cities in the two-county area.

"This market is in uncharted territory," he said.

When the real estate bubble burst in 2008, foreclosures created a market with plenty of inventory but little to no demand, he said. Now Northwest Arkansas, through a combination of market pressures brought on by the covid-19 pandemic, is seeing the reverse -- super-tight inventory, high demand and low mortgage rates.

He said the availability of entry-level homes is particularly limited as the costs of lots and building materials rise and builders and developers tend to make more profit on larger homes in general. Yates said cities could help by streamlining the home building process and federal and state governments could offer tax credits and other incentives to builders and developers to bring smaller, lower-priced new homes to the marketplace.

Yates said looking to the future it's unclear how many mortgage defaults the area will see with the national foreclosure moratorium lifting. He said while the bubble bursting in 2008 left many without any equity in their home, the current jump in housing prices might leave some home owners with money in their pocket if they're forced to sell.

According to information released by the Associated General Contractors of America on Tuesday, the Fayetteville-Springdale-Rogers Metropolitan Statistical Area which includes Benton, Washington and Madison counties, along with McDonald County in Missouri, saw jobs in the mining, logging and construction segment go from 12,500 in July of 2020 to 14,000 in July of 2021, an increase of 12%. The area ranks at 118th for job growth, tying with several other statistical areas, for the period.

The association indicates that while three out of four metro areas added jobs over most recent 12 month period, employment is still below pre-covid 19 pandemic levels and the industry is facing challenges going forward.

"The rapid spread of the delta variant of coronavirus, along with soaring materials costs and multiple supply-chain difficulties, appears to be causing some project owners to delay starting construction," Ken Simonson, the chief economist for the Associated General Contractors of America, said in a statement. "However, the virus flare-up threatens further job gains, particularly because construction workers have a lower vaccination rate and thus a higher risk of becoming ill than other occupations."

The Skyline Report examines the residential, commercial and multifamily real estate market in Benton and Washington counties. Researchers at the University of Arkansas, Fayetteville's Center for Business and Economic Research compile data for the report.

In late 2020 the report began to include single-family home information for Madison County but not multifamily data.