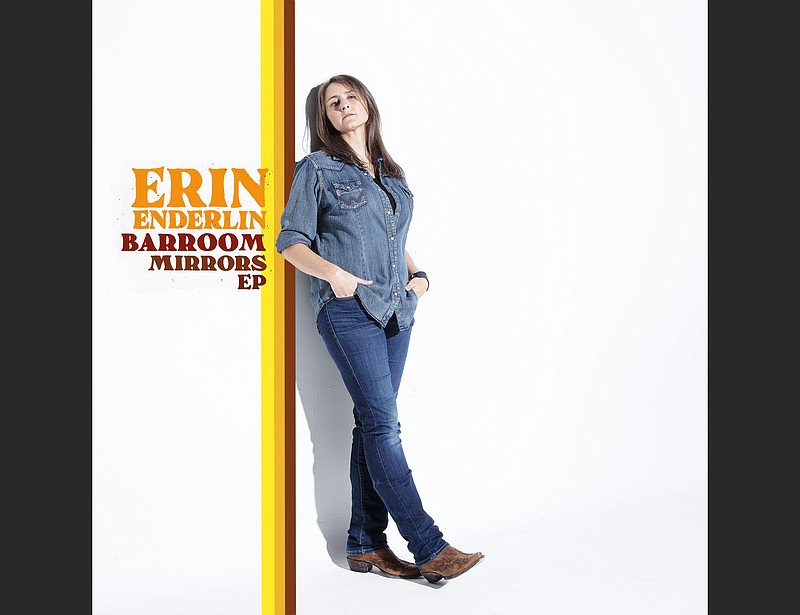 It has been a busy month for singer-songwriter Erin Enderlin. The Conway native's new EP, "Barroom Mirrors," was released Oct. 15, which was also when she played the Grand Ole Opry on a bill with John Conlee, Bobby Osborne & Rocky Top X-Press and Connie Smith. And she was part of a star-studded lineup for the virtual Johnny Cash Heritage Festival that included Sheryl Crow, Darius Rucker, Chris Stapleton, Vince Gill, Margo Price, Keb' Mo' and others.

Enderlin, who produced "Barroom Mirrors," has had her songs recorded by Alan Jackson, Luke Bryan, Lee Ann Womack, Randy Travis, Gene Watson, Bill Anderson and more. She's an 11-time winner at the Arkansas Country Music Awards, including entertainer of the year in 2021, and has won songwriter of the year every year since the awards began in 2018.

Elton John is a fan and had her on his "Rocket Hour" podcast last year after mutual pal Rosanne Cash turned him on to Enderlin's music.

"Barroom Mirrors" is the 39-year-old Enderlin's fourth album and follows 2019's "Faulkner County." It is, unsurprisingly, straight-no-chaser country with plenty of whiskey, a "Blue Ribbon morning" after "a Black Label night," troubled romances and jukeboxes. The six-song set features duets with her pals Terri Clark and Cash, Enderlin's crystal clear vocals and sly way with words.

The album is available at the usual streaming outlets and at erinenderlin.com.

A week before the release of "Barroom Mirrors," Enderlin, who has a sneaky sense of humor, spoke from the Nashville, Tenn., home she shares with husband Neil Zacharuk about the new record, the stories behind a couple of the tracks and dealing with writer's block.

This interview has been edited for clarity and space.

I have about 100 merch packages to pack up and mail, which is the sexy part of the music business [laughs]. I really nerd out about that stuff now.

I'm joking, but listening to the album — is it time for an intervention? I mean, there's a lot of drinking going on.

[Laughs] I've had a lot of drinking songs, and I kind of want to move away from that, but this is actually a themed project. I've had this idea for a while. "Barroom Mirrors" is the oldest song on the project. It's about how when you walk into a bar and you see all these people drinking and laughing or crying. They all have their own stories. Each song is kind of a different character in that barroom on the same day.

You sing with Terri Clark on "If There Weren't so Many Damn Songs" and Rosanne Cash on "Cut Through Me." Did you write those songs with them in mind?

I didn't, but Terri has become a good friend of mine. She sang harmony on a song on my last record. I don't know if you're familiar with this pandemic thing going on, but most folks weren't out playing shows [laughs]. Since Terri was home, I asked if she would come sing this song with me.

I haven't actually met Rosanne in person, but she got a hold of my last record and really liked it. She reached out to me at the craziest part of the pandemic and sent some nice emails that encouraged me, so I asked her if she would be interested in singing on a song. I've always loved her voice. She has this great vibrato, but her voice is so rich that it's a different kind of thing.

You mentioned the concept behind the EP, does that also play into how the songs are sequenced?

[Sequencing] is always tough for me. It kind of seemed like, at least for the first four songs, that was kind of the order I settled on to release the songs, so I felt like that made sense. Early on I thought "Barroom Mirrors" should be first, but then I decided to put it at the end to wrap everything up.

You produced the album yourself. Was it looser than it would be with someone else?

It was definitely looser [laughs]. I just wanted to connect with the music. I taught myself enough to record guitar and vocal stuff on my computer and I got into doing demos. I got in touch with [engineer Justin Courtelyou] and just said that I wanted to sort of push myself and get outside of my comfort zone. I found that to be really good for me.

The first track, "Somebody's Shot of Whiskey," really gets things going. Is there a story behind its origin?

I was playing a fair in Kansas and it was approximately 1 million degrees outside [laughs] and I saw a woman with a T-shirt that said 'I'd rather be somebody's shot of whiskey than everybody's cup of tea.' I was like, 'Yes, I get this.' I filed it away and pitched it to a bunch of folks, but nobody bit.

When I started this project I knew that was one I wanted on here. I love the vibe of it. I started writing with Ben Chapman, and it might have been the second song we wrote together. He's got this great, Willie Nelson-hippie-funk vibe. When I threw it out to him he said: 'Yeah, let's do it.'

What about "If There Weren't So Many Damn Songs"?

I wrote that with Kayla Ray. It was during the whole pandemic weirdness and we were both kind of in a songwriting funk, so I said: 'We have to write a song this week.' She had been procrastinating and then threw this thing together and sent it to me and it was the beginnings of that song. We got together and we tweaked it up and added a bridge and the rest is history.

So there are times when you have writer's block?

How do you get out of it?

You remember that you're working on a lifetime of work, a body of work. Sometimes I'll go months without writing anything, then I'll write 10 songs in a week.

To me, the process has multiple parts. Maybe you're not supposed to be writing today. Maybe you need to go read a book or take a walk or watch a movie or sit in a coffee shop and listen to people's conversations. That part of it, filling up the well, is as big as actually writing down the words and melody and I think that is one way to not get too bogged down and feeling like you have writer's block.

And sometimes you just sit down and make yourself write a song. Maybe it's not the best song you've ever written, but you go through the process.

Have you ever written short stories or other fiction?

I've played around with it, definitely in high school and college. I'd like to get back to it at some point. There's no timeline, but I have been starting to collect some of my stories [about] things I've done and been a part of here. And I've been writing little pieces on each of these characters from ["Barroom Mirrors"]. But I've gotten to do so much cool stuff here in Nashville, it would be fun to put out a book about that.

Any plans for a tour or shows here in Arkansas?

I hope so. It's complex. I'm hoping by at least next spring stuff will open up a little more. I'm working on a couple of shows out of town and I think more of those will come.