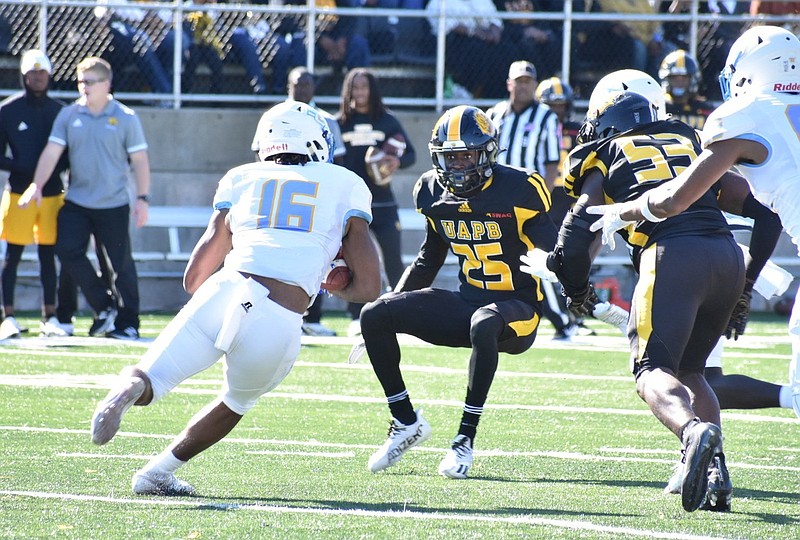 Southern University's offense scored its first touchdown in just two plays from scrimmage, and that was after Chase Foster intercepted Skyler Perry three plays into the University of Arkansas at Pine Bluff's opening drive.

Kobe Dillion ran 40 yards to give the Jaguars a lead they wouldn't give up in a 34-7 victory to spoil the Golden Lions' homecoming Saturday at Simmons Bank Field. UAPB has lost five games in a row, its longest skid since an eight-game slide in 2018.

That bad omen for the struggling Golden Lions (1-5, 0-4 Southwestern Athletic Conference) led to a record-setting day for Dillion, a freshman running back from Ferriday, La. He broke the conference's single-game rushing record with 267 yards and three touchdowns on 14 carries, an average of 19.1 yards per game.

"We've got to fit the gaps better, and we've got to tackle," Lions Coach Doc Gamble said. "They schemed it up pretty good and found a couple of weaknesses within our defense."

[Video not showing up above? Click here to watch » arkansasonline.com/1017pbtailgate/]

The Lions, who once led the SWAC in rush defense at less than 100 yards per game, allowed a season high in rushing yards (304) to the Jaguars (3-3, 2-1). But before a big homecoming crowd, the count of which was not available, the UAPB offense was also mired in interceptions, three of the four thrown by backup Xzavier Vaughn.

Perry got the start and completed 4 of 6 passes for 55 yards, his first game completing more than 50% of his passes since the Sept. 23 loss to Alcorn State University. Perry denied being slowed by injury this season.

"Us just doing our job, that's the big thing, keeping everybody's spirits high and executing," Perry said. "That's what we haven't been doing, and that's been our reason for losing. Sometimes, you've got to look in the mirror at times and figure out what you're doing individually."

Vaughn entered the game on UAPB's second offensive drive and finished with 87 yards on 11-of-20 passing.

Gamble said Vaughn got into the action early to see whether he or Perry could gain the hot hand.

"That's kind of how we practice, so it was nothing new," Gamble said. "Both of them kind of get an equal amount of reps, although Perry is the starter and Xzavier is the backup. Xzavier had shown us a spark the last couple of games."

Vaughn stopped Southern's shutout bid by rushing 13 yards for a touchdown with 1:54 left.

Pine Bluff High School graduate Ladarius Skelton played in his first game for Southern since Sept. 18, coming off a bone bruise in his injured knee.

Skelton was 1 for 2 passing for 11 yards. That completion was a shovel pass to wideout Jamar Washington, who took it in for a touchdown after UAPB freshman Kayvon Britten muffed the kickoff after a 45-yard Dillion scoring run early in the second quarter.

Dillion's longest run came on the first play from scrimmage of the second half. His 75-yard jaunt expanded the lead to 28-0.

Only two of UAPB's five first-half drives went into Southern territory, and none got into the red zone.

The Lions moved the ball inside the Jaguars' 20 three times and got into Southern territory one other time on seven second-half possessions.

UAPB's Deontay Cooper recovered Chandler Whitfield's fumble at the Jaguars' 15 on a punt return to give the Lions their best field position, but on third-and-8, Vaughn threw an interception to Glen Brown, one of three on the day for the junior from LaPlace, La.

"We've got to find out what we do best down there," Gamble said of UAPB's red-zone woes. "Things do get a little tighter in the red zone. You've got to throw it really well or run it really well."

Dillion, who broke the SWAC record of 245 rushing yards by Southern's Lenard Tillery against Prairie View A&M University on Nov. 12, 2016.

UAPB will step away from SWAC play to take on the University of Arkansas for the first time. Kickoff is set for 11 a.m. Saturday at War Memorial Stadium in Little Rock, and the game will air on the SEC Network. 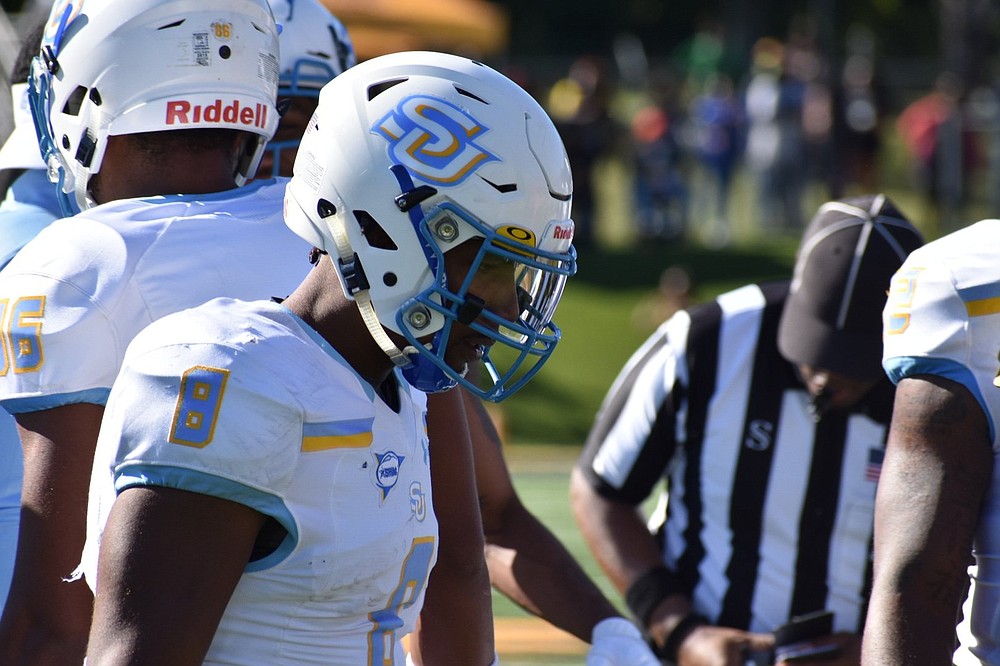 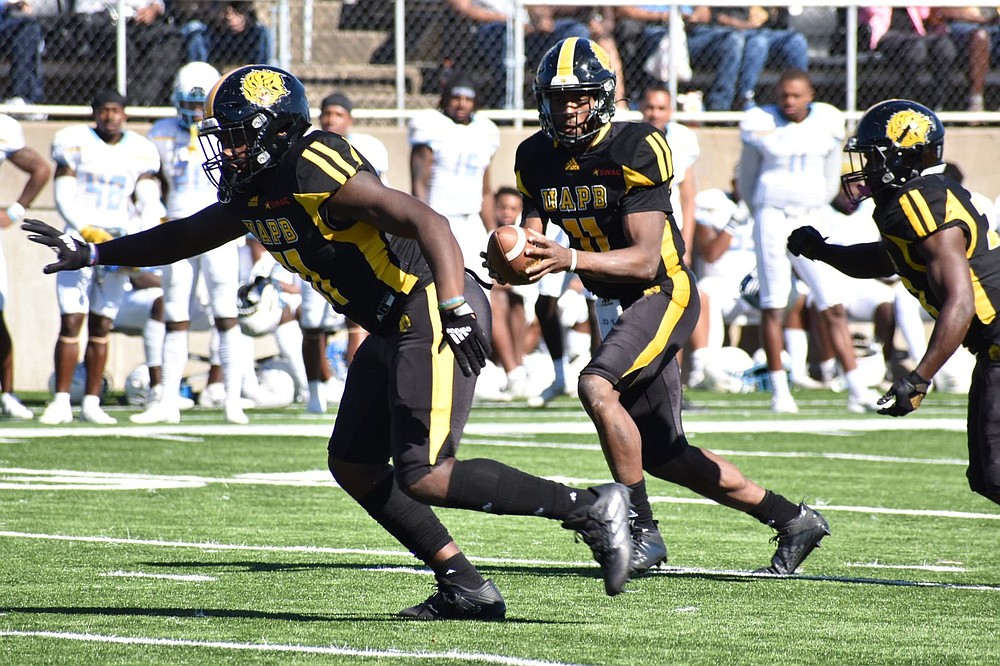 UAPB quarterback Skyler Perry drops back for a pass with blocking from Rolando Jones (51) in the first quarter. Perry exited the game after completing 4 of 6 passes for 55 yards. (Pine Bluff Commercial/I.C. Murrell) 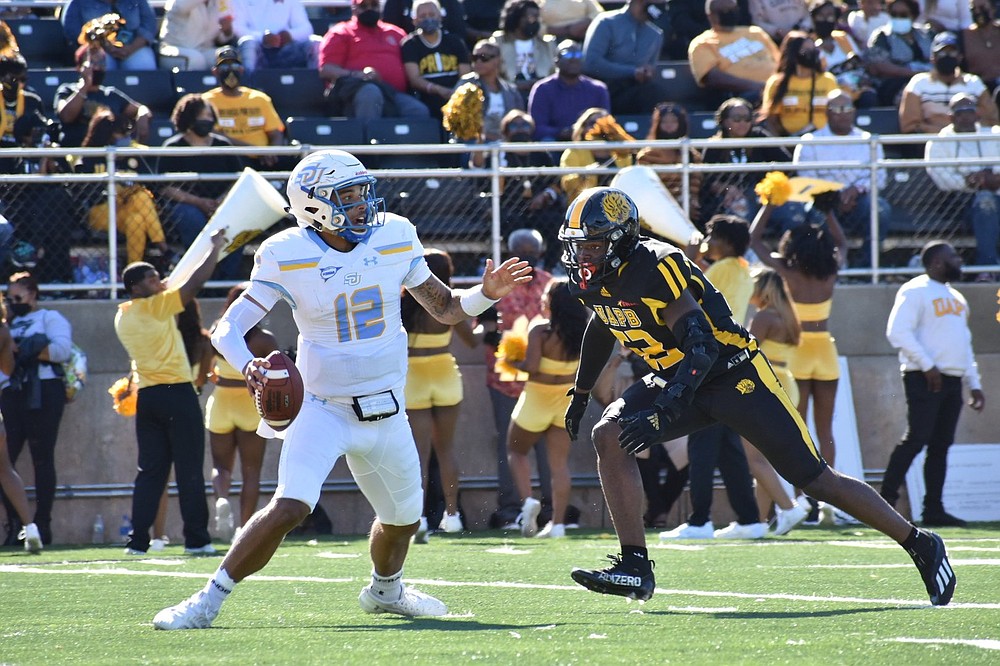 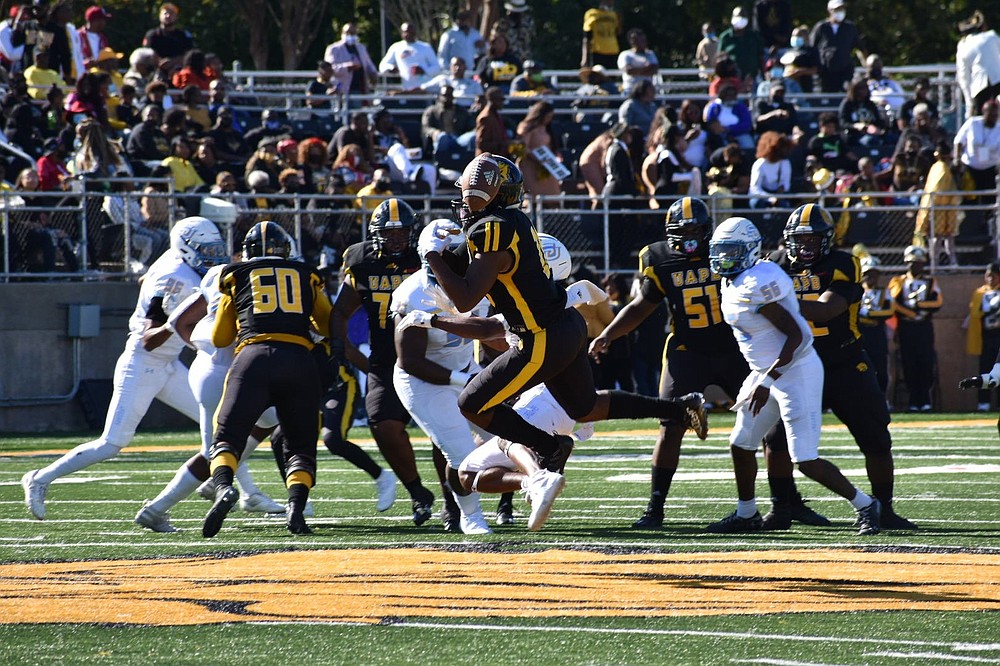