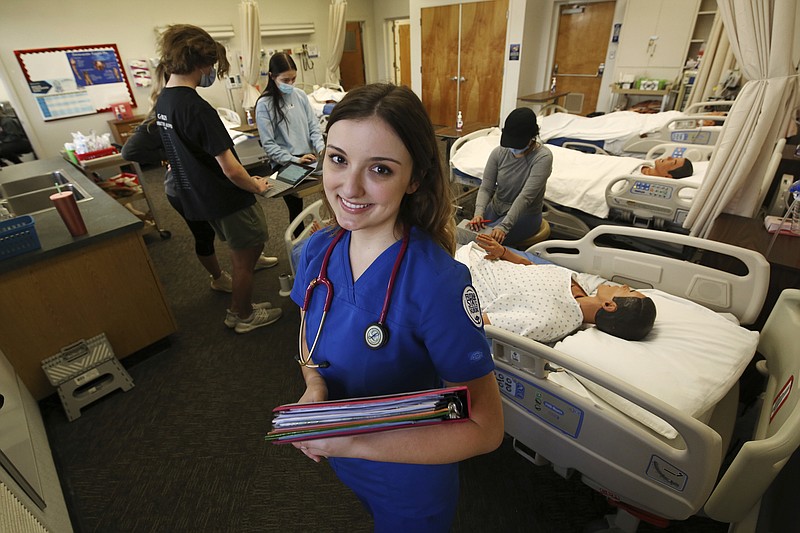 First year nursing student, Emma Champlin, poses for a photo in her clinical laboratory class at Fresno State on Wednesday, Oct. 13, 2021, in Fresno, Calif. Champlin said that like many of her classmates, she saw the pandemic as a chance to learn critical-care skills and to help at a time when those abilities are needed. (AP Photo/Gary Kazanjian)

STORRS, Conn. -- Nurses around the U.S. are getting burned out by the COVID-19 crisis and quitting, yet applications to nursing schools are rising, driven by what educators say are young people who see the global emergency as an opportunity and a challenge.

Among them is University of Connecticut sophomore Brianna Monte, a 19-year-old from Mahopac, New York, who had been considering majoring in education but decided on nursing after watching nurses care for her 84-year-grandmother, who was diagnosed last year with COVID-19 and also had cancer.

"They were switching out their protective gear in between every patient, running like crazy trying to make sure all of their patients were attended to," she said. "I had that moment of clarity that made me want to jump right in to health care and join the workers on the front line."

Nationally, enrollment in bachelor's, master's and doctoral nursing programs increased 5.6% in 2020 from the year before to just over 250,000 students, according to the American Association of Colleges of Nursing.

Figures for the current 2021-22 school year won't be available until January, but administrators say they have continued to see a spike in interest.

The University of Michigan nursing school reported getting about 1,800 applications for 150 freshman slots this fall, compared with about 1,200 in 2019.

Marie Nolan, executive vice dean of the Johns Hopkins University School of Nursing in Baltimore, said it has seen its biggest number of applicants ever, many of them applying even before a vaccine was available, despite her worries that COVID-19 would scare off students.

Students at those and other schools have been able to gain valuable hands-on experience during the pandemic, doing COVID-19 testing and contact tracing and working at community vaccination clinics.

"We've said to the students, 'This is a career opportunity that you'll never see again,'" Nolan said.

Emma Champlin, a first-year nursing student at Fresno State, said that like many of her classmates, she saw the pandemic as a chance to learn critical-care skills and then apply them. And she is young and her immune system is fine, she said, "so the idea of getting the virus didn't scare me."

"It's just time for us to step in and give it our all and figure out how we can help, because there has to be a new generation and that's got to be us," the 21-year-old said.

The higher enrollment could help ease a nursing shortage that existed even before COVID-19. But it has brought its own problems: The increase, combined with the departure of too many experienced nurses whose job is to help train students, has left many nursing programs without the ability to expand.

The rise is happening even as hospital leaders around the U.S. report that thousands of nurses have quit or retired during the outbreak, many of them exhausted and demoralized because of the pressure of caring for the dying, hostility from patients and families, and the frustration in knowing that many deaths were preventable by way of masks and vaccinations.

Eric Kumor saw many of his nursing colleagues from a COVID-19 unit in Lansing, Michigan, transfer or take other jobs this past spring when the pandemic's third wave began to hit. He followed them out the door in July.

"It was like this mass exodus. Everybody chose their own health and wellness over dealing with another wave," he said.

He said he plans on returning to health care someday, but for now is working at a barbecue joint, where the worst thing that can happen is "burning a brisket."

"I'm not done with nursing yet," he said.

Betty Jo Rocchio, chief nursing officer for Mercy Health, which runs hospitals and clinics in Missouri, Arkansas, Kansas and Oklahoma, said her system has about 8,500 nurses but is losing about 160 each month.

The departures are also taking their toll on nursing education, which relies on clinical instructors and preceptors, the experienced, hands-on nurses who mentor students on the job.

Nursing faculty is expected to shrink by 25% by 2025 across the country as nurses retire or leave because of burnout or other reasons, said Patricia Hurn, the nursing school dean at Michigan.

Mindy Schiebler, a cardiac nurse from Vancouver, Washington, taught nursing students for three years before quitting in 2016. She said she would love to still be teaching but that it's not workable financially. She said she knows nursing professors who work multiple jobs or dip into their retirement savings.

"How long can you subsidize your own job?" she asked. "Nurses will make double what you make in just a few years out of the gate."

Administrators said they would like to see more financial incentives such as tax breaks for instructors and preceptors. Rocchio said it would also help to have national licensing instead of state-by-state requirements, giving health systems more flexibility in training and hiring.

Champlin, the Fresno State student now doing clinical studies in a COVID-19 ward, said the stress, even on students, is sometimes overwhelming. It's physically and mentally tiring to don cumbersome protective equipment every time you enter someone's room and then watch as a tube is inserted down the frightened patient's throat and the person is hooked up to a ventilator.

"I don't even know when it will stop," she said. "Is this the new normal? I think the scariness of it has worn off at this point, and now we're just all exhausted." She confessed: "That has had me reconsider, at times, my career choice."

Hurn said the pandemic has led to a new focus at her school on the mental health of students, leading to the creation of programs such as "Yoga on the Lawn."

"For nursing, you have to develop the skills to be resilient, to adapt to high-strain conditions," she said.

Monte, whose grandmother survived, said she believes the pandemic is waning and hopes to have a long career no matter the challenges.

"They do have this nursing shortage right now, which selfishly is good for me, because I won't have trouble finding a job, wherever I decide to go," she said. "I feel like I won't get burned out, even if we have another national emergency. I feel I'll still be committed to nursing." 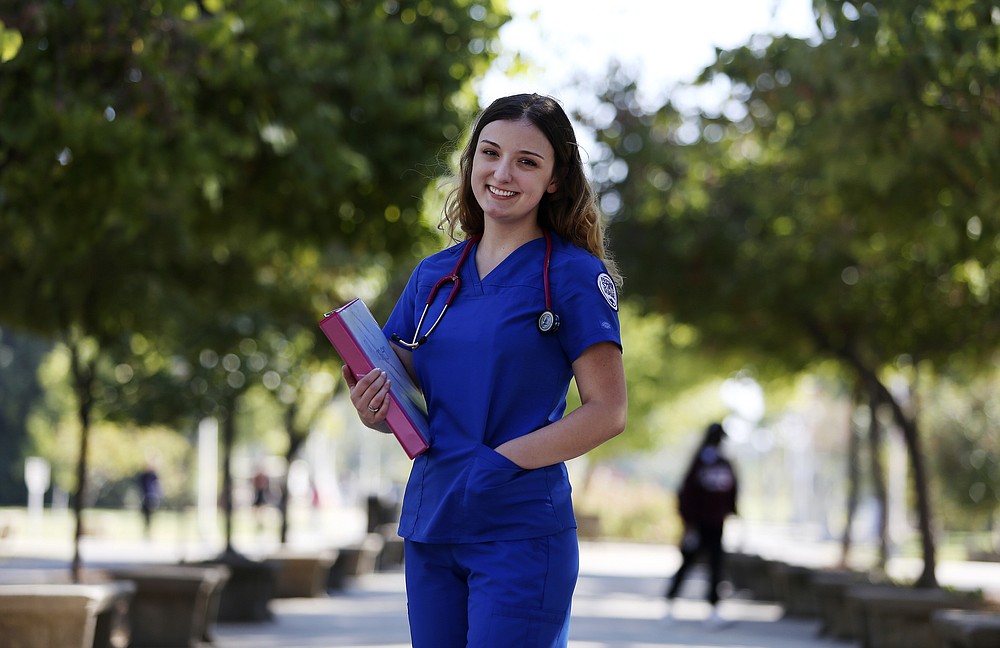 First year nursing student, Emma Champlin, poses for a photo near her class at Fresno State on Wednesday, Oct. 13, 2021, in Fresno, Calif. Nurses around the U.S. are getting burned out by the COVID-19 crisis and quitting, yet enrollment at nursing schools is surging. Champlin said that like many of her classmates, she saw the pandemic as a chance to learn critical-care skills and to help at a time when those abilities are needed. (AP Photo/Gary Kazanjian)