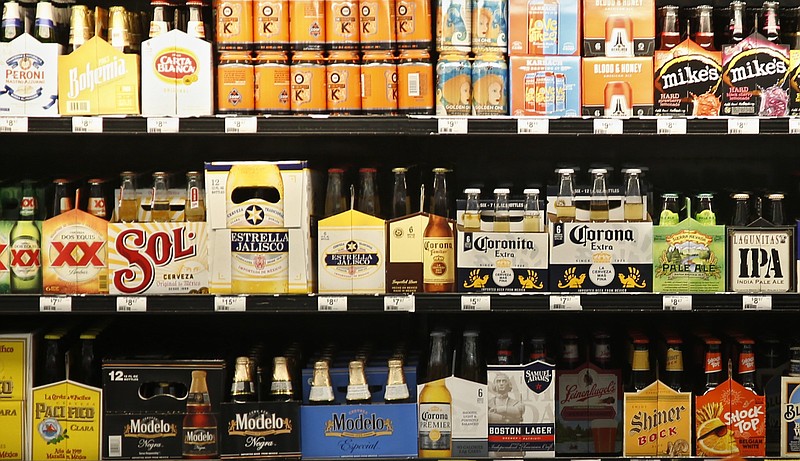 A portion of the beer selection at a grocery store is shown in this Oct. 1, 2018, file photo. (AP/Sue Ogrocki)

A first-of-its-kind survey for the state is asking college students about their drug and alcohol use.

"This will go toward helping create safer campuses," Slagle said.

Participating schools include the University of Central Arkansas, which distributed the survey in September. Slagle said more than two dozen schools responded with interest in participating. Early response data shows that more schools may have also decided to direct students to the survey, which is set to end Friday, Slagle said.

Not all colleges are taking part, including the University of Arkansas, Fayetteville.

Despite the state's largest university not distributing the survey to its students, Slagle said that with more than 3,000 survey responses submitted, "I feel confident that the data we have already is representative of the state in aggregate."

The project is being funded by the state Department of Human Services using $37,825 from a block grant provided to the state by the federal Substance Abuse and Mental Health Services Administration, said Gavin Lesnick, a spokesman for the department.

The state doesn't specifically track the number of college student deaths due to drugs, but the number of drug fatalities increased in Arkansas last year, said Kirk Lane, the state's drug director. His role involves coordinating drug- and alcohol-abuse prevention and treatment efforts.

Statewide data on opioid-related deaths shows fatalities increased to 215 last year, up from 180, part of an overall rise in drug fatalities that Lane attributed to the pandemic as well as the prevalence of illicit fentanyl.

"We knew that covid caused isolation and desperation for a lot of people struggling with substance abuse disorders," Lane said.

This year, Lane said, the numbers haven't fallen off.

"It's trending about the same as we did in 2020, so we're quite concerned with that," Lane said.

For the college student population, survey data will help the state better deploy prevention and treatment resources, Lane said. When it comes to substance abuse, there's less stigma and "people are starting to understand it as disease," Lane said.

There's been a lack of statewide data on drug and alcohol use among college students in Arkansas, Slagle said, referring to the findings of a work group within the state Department of Human Services that assesses factors contributing to substance abuse. A 2019 report by the Arkansas State Epidemiological Outcomes Workgroup listed "collegiate data" among statewide information deficiencies.

Based on the findings of other academic researchers, "the most widespread problem on college campuses is substance use," Slagle said.

UALR's Midsouth, a training and education organization supporting child welfare, works with the state on the survey of younger students and also is helping with the inaugural collegiate survey.

Slagle said a report will be made public based on the survey of college students. The 31-question survey is confidential, so answers provided by students are "not linked to you in any way," the survey states.

Students are asked how frequently they have consumed various substances -- some legal, many not -- in their lifetime and over the previous 30 days. Another question asks about a wide range of behaviors and outcomes "due to substance use/misuse." Students also are asked if the pandemic has affected their use of alcohol, tobacco or drugs.

Data is being collected in aggregate for the entire state, meaning that answers will not be sorted by a student's school, Slagle said. But the survey's design includes various questions about gender, age and other student characteristics, such as whether they live on or off campus, that Slagle said will allow for a better understanding of substance use among different collegiate population subgroups.

Lesnick said the hope is to continue the project yearly as long as funding is available.

"This is data that we don't have anything to compare it to, so it will just get better as we get longitudinal data to see the changes over time," Slagle said.