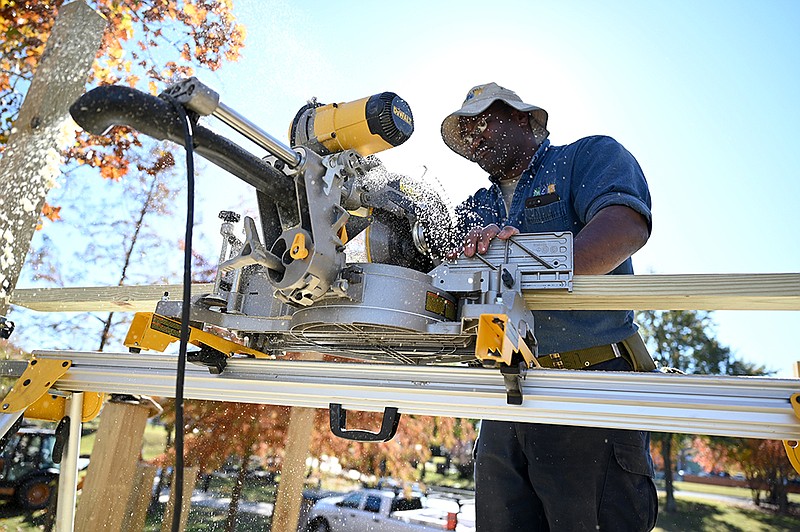 Jesse Lawson works on a tree house being built on the bank of the Arkansas River in Riverfront Park on Tuesday, Nov. 23, 2021. (Arkansas Democrat-Gazette/Stephen Swofford)

Construction work is underway to build a new structure styled after a treehouse near the Arkansas River in Little Rock's Riverfront Park.

Once it is complete, the treehouse will serve as an addition to the existing Riverfront Park attractions. It is located near a children's play area in the vicinity of the Vogel Schwartz Sculpture Garden.

As of Wednesday, the lumber frame -- or at least some of it -- for the building had been constructed along with a series of steps which visitors will presumably use to enter the structure from the park's walking path.

While the description might call to mind a ramshackle childhood playhouse nestled in the upper limbs of a sturdy tree, the structure going up in Riverfront Park isn't actually positioned in a tree or its limbs.

Instead, based on the work visible so far, the building will sit on stilts that have been placed past the barrier that separates Riverfront Park's pedestrian path from the riverbank. The structure's floor is not far from the ground.

John Eckart, outgoing director of the Little Rock Parks and Recreation Department, said in a recent phone interview that the structure is supposed to be for "kids, adults, whoever wants to go up there."

He suggested the treehouse will enable visitors to get closer to the water and the trees.

He could not say exactly when the construction work will be complete but said that hopefully the treehouse will be finished and opened up by the end of this year.

An individual ordinance or resolution to authorize construction of the treehouse did not go before the Little Rock Board of Directors. Eckart said the construction work is being done in-house by a department crew without an outside bid. He said they are buying the materials and producing the treehouse themselves.

A total of $100,000 has been allocated for the project, Eckart said, but he added that he did not think officials were utilizing all of it.

The treehouse will likely be one of the final projects to come to fruition, or close to it, under Eckart's watch. His last day in office will be Dec. 14, according to a copy of his resignation letter.

He has served as parks director since June 2017 after getting hired away from the city of Benton, where he served in the same role.