Amid signs of surge, governor asks Arkansans to take covid precautions as they head into the holiday weekend 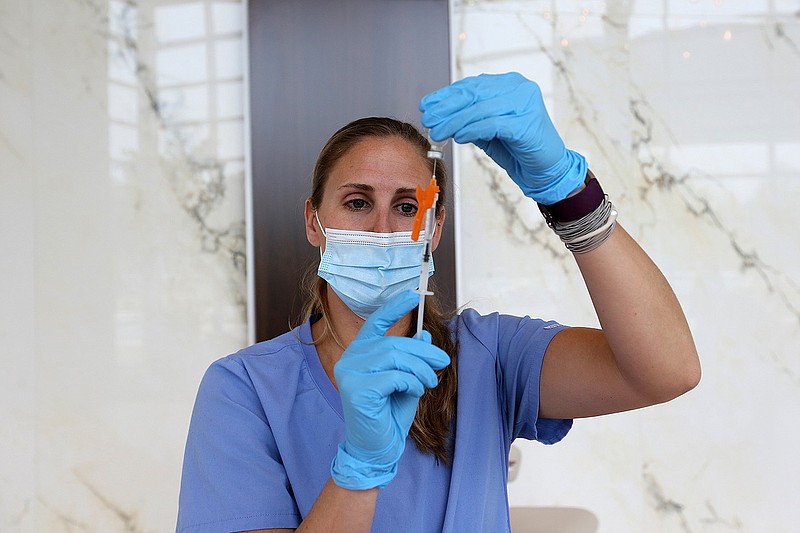 Saying he wanted to avoid a repeat of last year, Gov. Asa Hutchinson on Tuesday urged Arkansans to take steps to avoid catching or spreading the coronavirus during holiday gatherings this week.

[Video not showing up above? Click here to watch » arkansasonline.com/1124update/]

"The precautions that I ask everyone to take as you get ready for Thanksgiving are simply to be mindful that covid is still in our communities," Hutchinson said.

"Protect yourself by getting vaccinated. If you haven't got your booster shot, get a booster shot.

"And of course, if people in your gathering are not vaccinated, then just be mindful of that and socially distance or protect yourself as need be so we don't have an increase in the spread of covid during this wonderful time of the year."

Hutchinson spoke on a day in which the state's count of coronavirus cases rose by 690, the first daily increase in 11 days that was significantly lower than the one a week earlier.

Rising for the third day in a row, however, the number of people hospitalized in the state with covid-19 jumped by 12, to 345, its highest level since Oct. 29.

The state's death toll from the virus, as tracked by the Department of Health, rose by seven, to 8,627.

During his weekly news conference at the state Capitol, Hutchinson noted that, compared with a week earlier, the state's active case total was up by more than 900, and the number hospitalized with the virus was up by 69.

"That alone should tell you that we've got to be very cautious and wise in order not to have a surge like we did last winter, and I think we can avoid that with our increased vaccination rate," Hutchinson said.

After falling the previous two days, the active case total rose Tuesday by 108, to 6,079, as new cases outpaced recoveries and deaths.

The total as of Tuesday was still down from a recent high of 6,390 reached Saturday.

Hutchinson urged people who have recovered from infections to get vaccinated, saying studies show that the immunity resulting from an infection is not as strong as the protection offered by the vaccines.

"There is such a thing as natural immunity that you gain if you've had covid," Hutchinson said.

"It is not something that lasts forever. It has an end date and just like a vaccine over time loses some of its effectiveness."

Compared to the protection from vaccines, he said, the immunity from an infection wears off more quickly, generally lasting about 90 days.

The increase in cases on Tuesday was smaller by 124 than the one the previous Tuesday.

Falling for the second day in a row, the number of the state's virus patients who were on ventilators went from 62 as of Monday to 60.

After rising a day earlier, the number who were in intensive care fell by four, to 140.

The number of intensive care unit beds statewide that were unoccupied, however, fell by 11, to 84, reflecting a decrease in staffed beds and an increase in non-covid-19 patients who were in intensive care.

People with covid-19 made up about 13% of all the state's intensive care unit patients on Tuesday, down slightly from about 14% on Monday.

Health Secretary Jose Romero said the lower number of new cases on Tuesday compared to a week earlier was likely due to a reduction in testing as people prepare for the holiday.

For Thanksgiving gatherings in which people who are not fully vaccinated will be in attendance, he suggested precautions including limiting guests to immediate family members, having dinner outside, keeping guests spaced apart and keeping indoor spaces well-ventilated.

People who are not fully vaccinated should wear masks, he said.

Before attending a gathering, he said, people may want to test themselves for the virus, such as by using an in-home testing kit, if they have not been vaccinated, have symptoms or will be visiting elderly relatives.

Romero also urged vaccinations for pregnant women, who he said are at increased risk for severe complications from covid-19, and children ages 5-11, who he said make up about a quarter of the state's new cases.

"Covid is not a benign disease in children," he said, noting that hundreds of children nationwide, including three in Arkansas, have died from the disease.

Children ages 5-11 became eligible for a low-dose version of the Pfizer vaccine earlier this month.

According to a chart Hutchinson presented at the news conference, vaccinations for that age group have gotten off to a slower start than they did for children ages 12-15, who became eligible for the Pfizer vaccine in May.

The Health Department's count of children ages 5-11 who had received their initial vaccine dose rose Tuesday by 928, to 19,606, representing about 7.2% of children that age.

Romero also urged people to get the flu shot, saying he expects the current flu season to be worse than the previous two.

Among students and employees at the state's public elementary and secondary schools, the number of active covid-19 cases fell by 89, to 1,425, from Thursday to Monday, according to Health Department reports.

As tracked in the reports, which are released twice a week, it was the first decline in the total since Nov. 8.

The total as of Monday, however, was still up by almost 200 compared to the number a week earlier.

Despite the dip in the case total, the number of districts and charter school systems with five or more active cases rose by five, to 87, from Thursday to Monday.

Only 68 districts and charter school systems had five or more cases as of Nov. 15.

The Bentonville School District was listed as having the most active cases on Monday, 69, which was up from 63 on Thursday.

Since Aug. 1, 26,459 students and employees at the state's public elementary and secondary schools have tested positive for covid-19. The active case total peaked at more than 4,800 in early September.

Due to the holiday, many school districts were closed this week to students and at least part of the week to employees.

At colleges and universities, the number of active cases among students and employees rose by four, to 120, from Thursday to Monday.

The University of Arkansas, Fayetteville, continued to have the largest number, although its total dropped by four, to 20.

The University of Central Arkansas in Conway had the next-highest total as of Monday, 17, followed by Harding University in Searcy with eight.

At private elementary and secondary schools, the number of active cases among students and employees fell by one, to 31.

No private schools were identified as having five or more active cases as of Monday.

Statewide, Pulaski County had the most new cases on Tuesday, 88, followed by Washington County and Benton County, which each had 53.

All of the deaths reported Tuesday happened within the past month, Health Department spokeswoman Danyelle McNeill said.

According to the department, 7.5% of the state's coronavirus tests were positive over the seven-day span ending Monday, up from the 7.4% that was initially reported for the week ending Sunday.

Hutchinson has said he wants to keep the percentage below 10%.

The number of people who have ever been hospitalized in the state with covid-19 grew Tuesday by 54, to 28,202.

The number of the state's virus patients who have ever been on a ventilator rose by eight, to 2,976.

At 11,685, the increase in the Health Department's tally of vaccine doses that had been administered was the fifth one in a row that was larger than the one a week earlier.

Booster shots made up 52% of the most recent increase.

The count of first doses rose by 3,652, which was larger by 667 than the increase in first doses the previous Tuesday.

The average number of total doses administered each day over a rolling seven-day period rose to 9,944, which was up slightly from the average a week earlier.

After falling on Monday, the average for first doses rose to 3,350, which was up by about 50 from the average the previous week.

According to the CDC, 60% of Arkansans had received at least one vaccine dose as of Tuesday, up from 59.9% as of a day earlier.

The percentage of Arkansans who had been fully vaccinated remained at 49%.

Among the states and District of Columbia, Arkansas continued to rank 36th in the percentage of its residents who had received at least one dose and 44th, ahead of Louisiana, North Dakota, Mississippi, Alabama, Wyoming, Idaho and West Virginia, in the percentage who had been fully vaccinated.

Nationally, 69.5% of people had received at least one dose, and 59% had been fully vaccinated.

Of the fully vaccinated population nationally, 18.7% of people had received a booster dose.