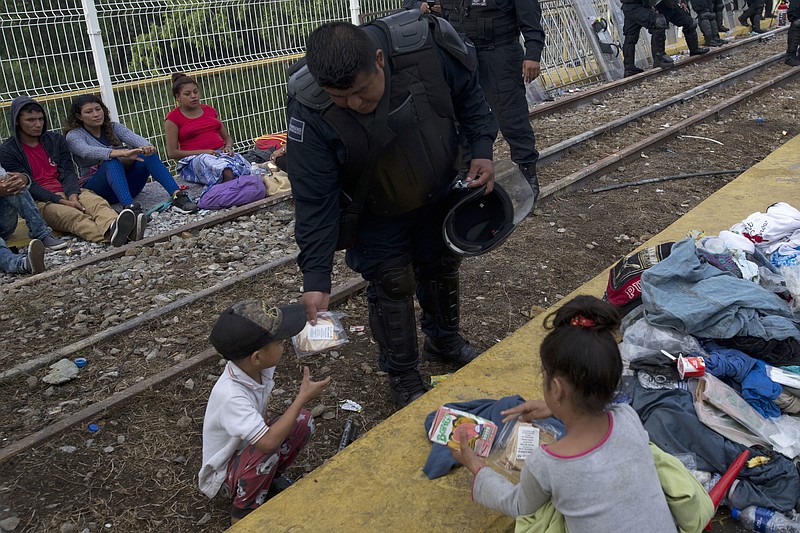 A Guatemalan police officer gives a migrant child some food as the migrants bound for the U.S.-Mexico border wait on a bridge that stretches over the Suchiate River, connecting Guatemala and Mexico, in Tecun Uman, Guatemala, early Saturday, Oct. 20, 2018. The migrants have moved about 30 feet back from the gate that separates them from Mexican police to establish a buffer zone. About 1,000 migrants now remain on the bridge between Guatemala and Mexico. (AP Photo/Moises Castillo)

FAYETTEVILLE -- Election officials in Northwest Arkansas say they want to advocate for better election-related laws at the state Legislature.

The Washington County Election Commission agreed Friday to host a regional meeting July 21 of county election officials. The group met sporadically in recent years before being derailed in 2020 by the covid-19 pandemic.

"This will be our first meeting in more than a year," Renee Oelschlaeger, commission chairman, said Friday.

The commissioners said they want to work with other counties to try and influence legislation.

Jennifer Price, Washington County's election director, said the regional election group was having some success with it's lobbying efforts before the covid-19 pandemic. She said the group had a list of issues developed in 2018 resulting in some positive legislation in the 2019 session.

Commissioner Jim Estes said the Legislature too often fails to listen to the people who run the elections.

"Most of the mistakes they made, probably 80% of them are process mistakes because they don't know the election process like the people who are running the elections," Estes said.

Estes cited one bill approved in the 2021 session he thinks was unnecessary. The bill requires county poll workers to use a rubber stamp when a ballot is being "spoiled" or discarded.

Estes said he and Price were in Little Rock to speak to legislators on other issues when the bill was brought up. Price explained to the legislators the ballots are printed on thermal paper and ink used with a stamp will smear. She said there had been no problems she knew of with having poll workers write "cancelled" on those ballots.

The bill was approved with the requirement to use a rubber stamp.

Kim Dennison, Benton County's election coordinator, said she has found stamps that will meet the requirements of the new law. The stamps will cost the county about $900.

Dennison said the law requires three different stamps: one for "spoiled" or cancelled ballots; one for rejected ballots that the voting machines won't read but which will be counted later; and one for "abandoned" ballots, which would be any ballot found at a polling place not put through the vote-counting machines.

Dennison said she can't remember the county having any abandoned ballots in the years she has been working elections.

"That's something you might have if you still used paper ballots and you found one just lying around," she said. "The law says we have to do something with them so we have to have the stamp."