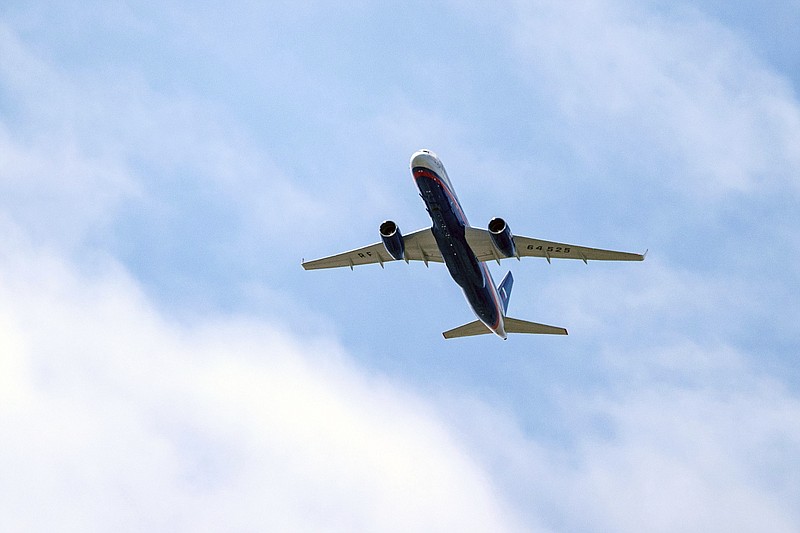 FILE In this file photo taken on Friday, April 26, 2019, A Russian Air Force Tu-214 flies over Offutt Air Force Base, Friday, April 26, 2019, in Omaha, Neb. The flight is allowed as part of the Open Skies Treaty. China, is lashing out at Washington over its withdrawal from the "Open Skies Treaty" with Russia, saying the move undermines military trust and transparency and imperils future attempts at arms control. The Russian parliament's lower house has voted to withdraw from an international treaty allowing surveillance flights over military facilities following the U.S. departure from the pact. (Chris Machian/Omaha World-Herald via AP, File)

MOSCOW -- The Russian parliament's lower house voted Wednesday to withdraw from an international treaty allowing surveillance flights over military facilities after the U.S. departure from the pact.

The Russian exit from the Open Skies Treaty is yet to be endorsed by the upper house of parliament and needs to be signed by President Vladimir Putin to take effect.

Moscow has signaled its readiness to reverse the withdrawal procedure and stay in the treaty if the United States returns to the agreement.

Deputy Foreign Minister Sergei Ryabkov told Russian lawmakers Wednesday that if the U.S. declares its intention to return to the pact, a "new diplomatic process will start." He added, however, that he considers that unlikely.

The withdrawal vote came hours before U.S. Secretary of State Antony Blinken and Russian Foreign Minister Sergey Lavrov were to hold their first meeting on the sidelines of a gathering of top diplomats from the Arctic countries in Reykjavik, Iceland. They are expected to focus on setting the stage for a planned summit next month between U.S. President Joe Biden and Putin.

The Open Skies Treaty was intended to build trust between Russia and the West by allowing the accord's more than three dozen signatories to conduct reconnaissance flights over each other's territories to collect information about military forces and activities.

More than 1,500 flights have been conducted under the treaty since it took effect in 2002, aimed at fostering transparency and allowing for the monitoring of arms control and other agreements.

Then-President Donald Trump pulled out of the pact last year, arguing that Russian violations made it untenable for Washington to remain a party. Washington completed its withdrawal from the treaty in November.

Moscow has deplored the U.S. withdrawal, warning that it will erode global security by making it more difficult for governments to interpret the intentions of other nations, particularly amid heightened Russia-West tensions.

The European Union has urged the U.S. to reconsider its exit and called on Russia to stay in the pact and lift flight restrictions, notably over its westernmost Kaliningrad region, which lies between NATO allies Lithuania and Poland.

As a condition for staying in the pact after the U.S. pullout, Moscow has unsuccessfully pushed for guarantees from NATO allies that they wouldn't hand over the data collected during their observation flights over Russia to the U.S.

The upper house of Russia's parliament, the Federation Council, is expected to approve the withdrawal bill on June 2; once Putin signs the measure, it would take six months for the Russian exit to take effect.

Leonid Slutsky, the head of the foreign affairs committee in the lower house, has said that the upper chamber initially planned to vote Wednesday on leaving the pact but pushed its consideration back at Putin's suggestion to offer the U.S. more time to consider a comeback. 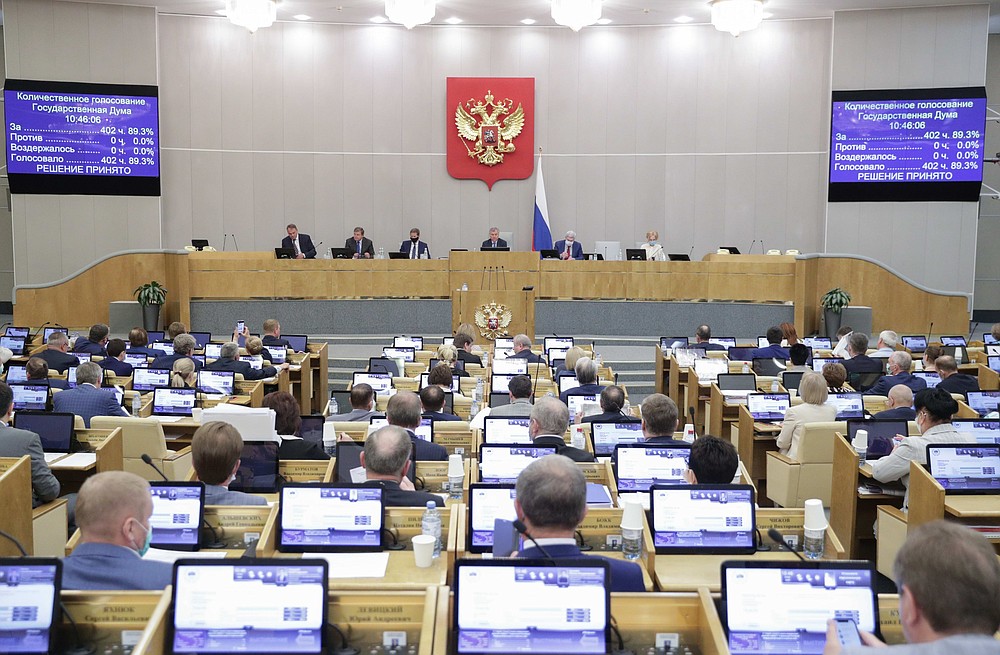 In this photo provided by the State Duma, deputies attend a session at the State Duma, the Lower House of the Russian Parliament in Moscow, Russia, Wednesday, May 19, 2021. The Russian parliament's lower house has voted to withdraw from an international treaty allowing surveillance flights over military facilities following the U.S. departure from the pact. The Russian exit from the Open Skies Treaty is yet to be endorsed by the upper house of parliament and needs to be signed by President Vladimir Putin to take effect. (The State Duma, The Federal Assembly of The Russian Federation via AP)
ADVERTISEMENT