PREP TRACK: Fayetteville's Hurley ready for his chance at decathlon 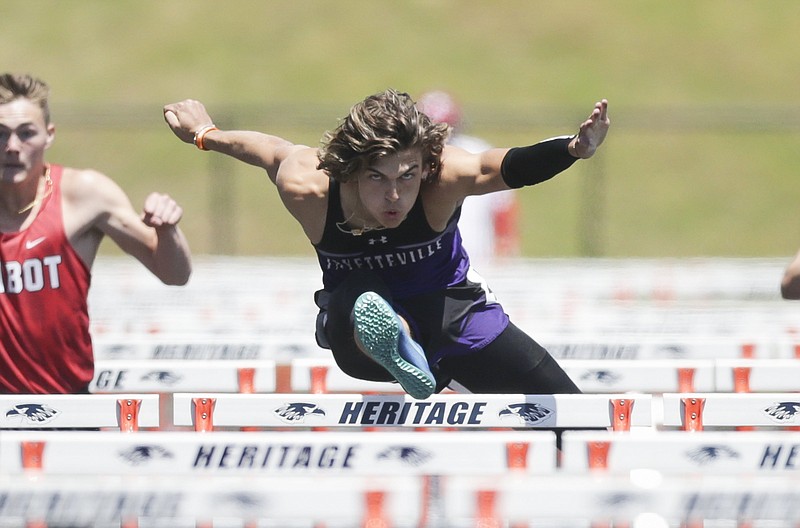 FAYETTEVILLE -- It's the event Sam Hurley has prepared for since he began track and field competitions as a young boy.

Now the Fayetteville junior will get his first opportunity to compete in the Arkansas High School Boys Decathlon when it takes place over the next two days at Ramay Junior High.

"Growing up in track meets, I always did a variety of events," Hurley said. "I did sprints, jumps, sometimes a little bit of mid-distance and even javelin growing up. Ever since I was a little kid in track, I was kinda told to be a decathlete because of everything I did.

Hurley has had a taste of what to expect when he competes in 10 events over the next two days. He was involved in six events -- the long jump, high jump, pole vault, 110- and 300-meter hurdles, and the 400 relay team -- when he competed in the Class 6A state track meet earlier this month at Rogers Heritage.

One could say he actually did eight events that day, considering he ran both prelims and finals in the 110 hurdles, then the finals had to be run a second time after a hurdle contacted by one hurdler interfered with two other runners.

"Seeing all of what he was able to do this year, we knew he had an opportunity to do well in it," Fayetteville track Coach Drew Yoakum said. "His brother actually did the decathlon a few years ahead of him, and we knew through his Junior Olympics that he's done a lot of events through grade school and junior high."

If Hurley is at his best over the course of the 10 events, some event records could be in danger.

He cleared 6 feet, 10 inches in the high jump earlier this season, and the decathlon record is 6-7 held by Russellville's Taelon Peter in 2019. He's also capable of breaking the 110 hurdles record of 15.00 set by Crossett's Trevean Caldwell in 2016.

Hurley expects to pile up points in events he has excelled in throughout the season, such as the high jump, pole vault, long jump and hurdles. He admits the event that causes some concern is the discus, which takes place Thursday.

"The shot put and the discus will be the difficult ones, but hopefully that gets straightened out with his strengths in the other events."