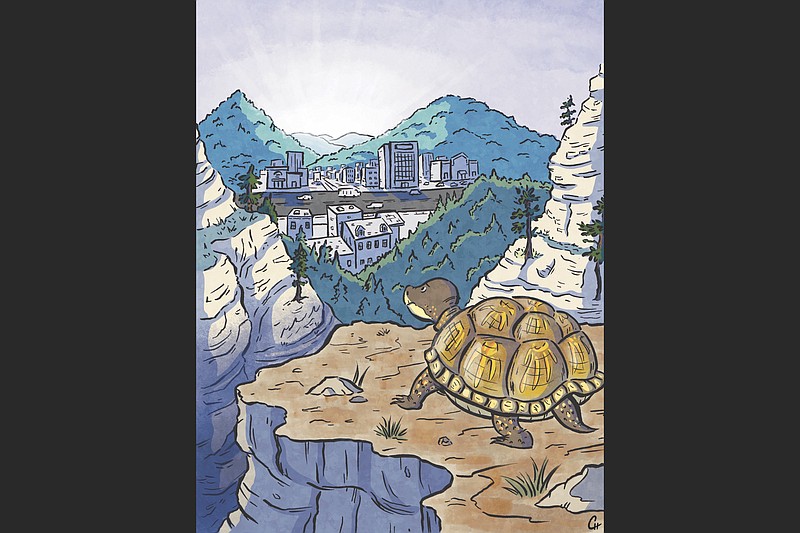 There are about 300 species of turtles in the world, and 16 of them can be found in Arkansas.

"That may not seem like a whole lot, but it's actually close to about 5% of the diversity in the whole world that we have represented right here in Arkansas," says Kory Roberts, who created and maintains the Herps of Arkansas website: https://herpsofarkansas.com.

May 23 is set aside as a day to "Shellabrate" them all. This year is, in fact, the 20th anniversary of World Turtle Day, sponsored by the American Tortoise Rescue as an annual observance of turtles, tortoises and their disappearing habitat.

Though this is the time of year turtles can most often be seen making their slow marches across Arkansas roadways, those sightings are less likely now than in bygone years.

It's tough to get an accurate count, since turtles don't answer roll calls or fill out census forms.

"But I will tell you that we have several species in decline, like our ornate box turtle. That's one we used to be able to see all the time," Monday says.

The ornate box turtle and the more common three-toed box turtle are the only two of the 16 species native to Arkansas that are terrestrial; the other 14 species are aquatic turtles. The ornate box turtle lives only in natural prairie lands, primarily in the northwestern corner of the state. Their numbers have dwindled, likely due to the development of much of its natural habitat, and the Game and Fish Commission has restricted their collection to protect the remaining population.

Chicken turtles, an aquatic species so named for their long necks, are another type of turtle that is less commonly found these days.

"We're doing population studies but pretty much you used to see them everywhere and now it's pretty rare to find them," Monday says.

So why does the turtle cross the road anyway?

Basically, according to Monday, it crosses because it needs to get to the other side, either to find a bare patch of ground where it can lay its eggs or to get back to where it came from afterward.

"The way turtles reproduce, they can actually retain the eggs and then come springtime those moms have got to move out of the water where they have been hibernating, and they have to go dig and lay those eggs," she says.

[RELATED: Turtle rehab is best left to the experts]

Wildlife photographer and outdoorsman David Martin of Oxford in Izard County, is one of the many humanitarians who stops to move turtles out of the paths of oncoming vehicles as they head to or fro.

"It's always been a compassion thing," he says. "Growing up, when I was with my parents or with my friends — and once we started driving by ourselves — when there are turtles on the road, I've always just picked them up and moved them. I'm teaching that to my kids as well."

Monday applauds such efforts, with the caveat that people should only stop for turtles when traffic conditions allow them to do so safely.

"And I try to tell people that turtles have beaks — strong beaks — and that if you're going to help them along you should always pick them up from the rear end because they have long necks," she says. "You always need to move them in the direction they were going because of that reproductive cycle I was talking about earlier."

Michele Merriman saw a big snapping turtle moving from one shoulder of the narrow two-lane highway near her home in Craighead County on her way to work a couple of years ago.

She stopped her car, turned on her hazard lights and walked a few feet back to the turtle, which scooted itself under her car. She worked it out from under the car with her umbrella, but the turtle was agitated by this, so she opted not to risk picking it up. She thought fast, pulling off her visor — the hard plastic kind, covered with fabric — and waving in front of the turtle's face. It chomped, clamping its jaws down on the brim, and she used that hat to lead the turtle across the road.

When they reached water on the other side of the highway, the turtle let go of Merriman's visor, dove in and swam away.

"I wouldn't have minded a swim myself at that point, just not with him," she jokes.

Some people may be tempted to take turtles away from the roadway altogether, either keeping them as pets or releasing them away from traffic. These well-intentioned folks are often doing more harm than good.

Box turtles are oriented to home within one or two square miles.

"If they get moved more than about a mile away from where you find them their survival rate is not actually very good, believe it or not," says Roberts, who is also a high school science teacher. "If you bring them out of their home territory it really messes them up. They'll just be wandering around trying to figure out where they are."

Turtles rounded up for races in community festivals are often in danger for this reason and others, he laments.

"Conservation followers are not big fans of that because the turtles don't always get treated too well by contestants and they paint their shells and stuff," Roberts says. "That puts a bullseye on them for predators. And then they're just dumped somewhere that's usually not home for the turtles."

Paint can be toxic, and even nontoxic paint on a turtle's shell can prevent the absorption of nutrients from the sun or interfere with the turtle's ability to regulate body temperature.

Roberts says that turtle harvests, too, threaten turtle populations in Arkansas. Some individuals take snapping turtles for turtle soup, but it's the commercial harvesters that cause him the most concern.

"Mostly what they're doing is harvesting them for the Asian market, for pet or food trade, like the common snapping turtle, the river cooter, the red-eared slider and even the spiny softshell," Roberts says. "They're supposed to report their harvest numbers to Game and Fish, but I, and some other people, really question how accurately the trappers are reporting what they're taking."

Roberts and others petitioned the Arkansas Game and Fish Commission in 2018 to ban commercial turtle harvests in the state. The commission denied their petition.

In 2019, the sale of annual commercial turtle harvest-related permits were capped at 150 per year and the commission required that each harvester submit at least one report per year to renew a commercial harvester or dealer permit. The commission closed the Gulf Coastal Plain and the St. Francis River in Greene and Clay counties to aquatic turtle harvest, and prohibited the sale of razorback musk turtles. As of 2021, a turtle breeder or dealer permit is required to buy or sell alligator snapping turtles or their eggs, and alligator snapping turtles longer than 5 inches may not be sold or traded without written approval from the commission. 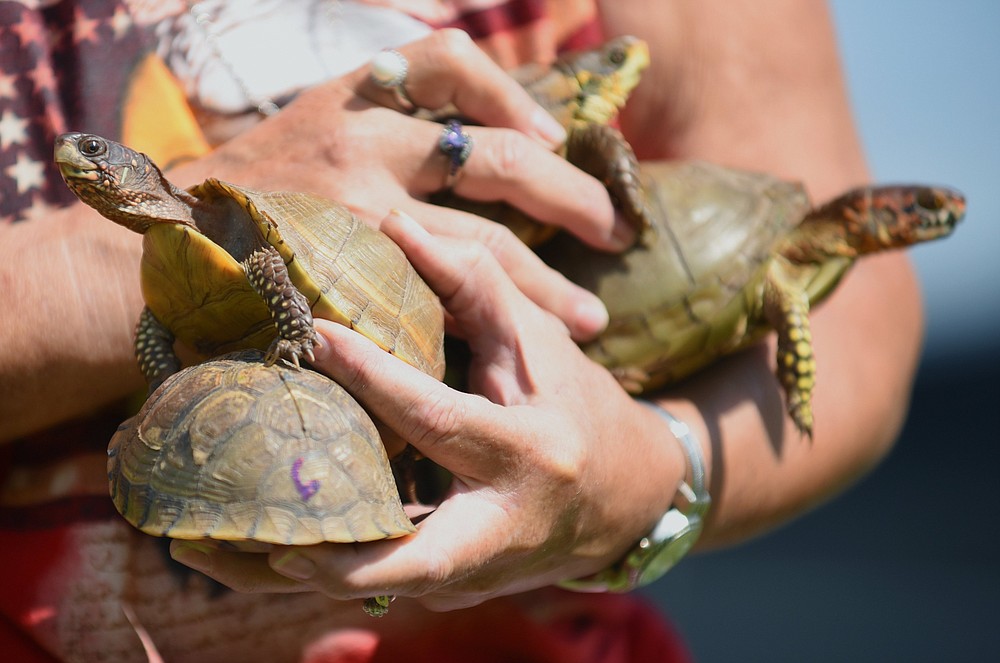 Turtle races still occur in some places despite warnings from experts who say the box turtles are miserable in captivity and should not be used as entertainment. (Democrat-Gazette file photo)

Turtles aren't just taken out of Arkansas, of course. Monday hears often about problems resulting from the pet turtle trade.

Turtles are long-living and require special attention. Depending on its species, a turtle's lifespan can be 20, 50 or even 100 years.

"That's a lifetime investment that you're making," says Monday of people who opt to buy turtles for pets.

People sometimes buy turtle species that are not native to this area as pets, and then release them in the wild when caring for them becomes too hard. Some of those species can spread disease and they compete with native animals for food and habitat.

"There's a species called a yellow-bellied slider that is big in the turtle trade and it's not native here," she says. "People will buy them and then just go release them and they out-compete the chicken turtle. It really just offsets the entire food chain."

Monday was drawn to herpetology as a child, after she found her first snake.

"I did my master's over turtles," she says. "That's what I did for about four years. What's interesting about turtles is that they're so long-living and they have all of these cues, especially underwater, that we don't know anything about, like how they're communicating with each other."

Male turtles, she says, are generally smaller than females because the females' scutes, the bony plates of their shells, grow to accommodate space for eggs.

"When you see those really big dome-shaped turtles, those are female turtles. I love the different colors, the different shapes, learning why they're important is interesting to me," she says.

People who are lucky enough to find that a turtle has made its home in their backyard, though, can enjoy the company.