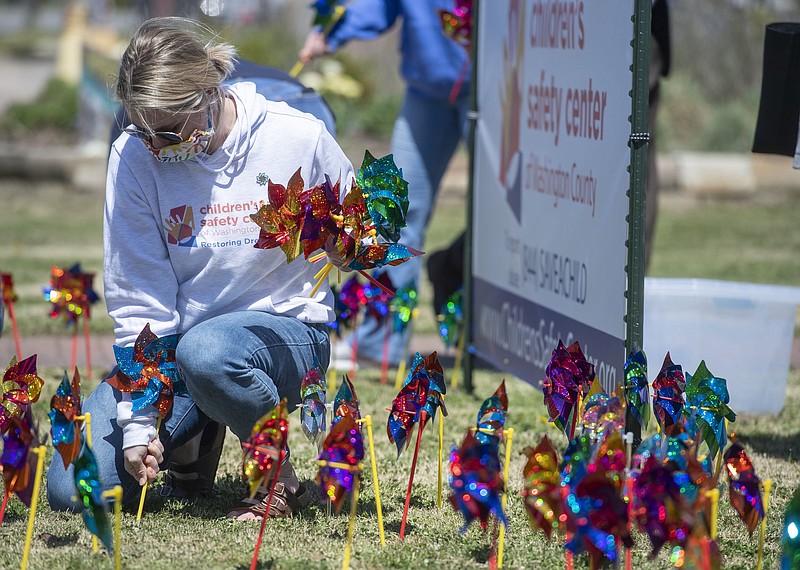 Lindsey Wagner, child advocate at the Children's Safety Center of Washington County, plants pinwheels Thursday at the corner of Emma Ave. and Thompson St. in Springdale. The Pinwheels for Prevention were placed by employees of the Children's Safety Center of Washington County and the Springdale mayor's office including mayor Doug Sprouse for Child Abuse Awareness Month. For more information see www.childrenssafetycenter.org. (NWA Democrat-Gazette/J.T. Wampler)

SPRINGDALE -- The Children's Safety Center of Washington County has announced plans to move from its home of 24 years on Emma Avenue to a new location in Springdale.

The center announced May 4 its new home will be built off Gene George Boulevard, just south of Arvest Ballpark near Tyson Parkway. The center has been at 614 E. Emma Ave. since it opened in 1997.

Elizabeth Shackelford, executive director of the center, said the project will triple the space available and provide room for expansion. The new facility should open in the summer or fall of 2o23.

The new facility will be the culmination of several years of planning and fundraising, according to information from the center. The "Healing the Future" campaign aimed to provide about $12.5 million for the new center. The total includes $8 million to cover capital costs and $2.5 million for three years of ongoing support for operating and program costs, which includes operation and maintenance, expanded staff and consultant fees.

The campaign goals also include building a $2 million endowment to provide money for future building maintenance and program support.

The Children's Safety Center coordinates the investigation, prosecution and treatment services in child abuse cases while providing child advocates, forensic interviews, sexual assault examinations, mental health therapy and child abuse prevention training, according to information from the center. The nonprofit organization has helped more than 11,000 children since opening in 1997.

The group has continued during the pandemic to provide services that include diapers or food, finding alternative living situations or referring non-offending parents to mental health services, according to the center's 2020 annual report.

In 2020, the center provided advocacy services for 672 children and families, forensic interviews for 555 children and conducted 1,683 therapy sessions.

Tibbs said the Benton County Center also opened a satellite office in Gentry last year. Tibbs said the center provided services to 970 children and their families in 2020, which was slightly less than the number served in 2019. So far in 2021, she said the number of children the center has served is likely to meet or exceed the 2019 number.

"They provide a number of services, including the treatment and support of children who are victims of sexual or physical abuse," Durrett said. "They provide a child-friendly setting where these kids can be interviewed in an appropriate environment."

Durrett said the staff at the center are specially trained to deal with children who have been abused, something most police investigators are not.

Sgt. Autumn Holland, with the Criminal Investigation division of the Washington County Sheriff's Office, echoed Durrett's comments and praise for the center's staff.

"They're child forensic interviewers," Holland said. "It's extremely different, dealing with children who have been abused. The staff does an excellent job of building a rapport with the child, making the child feel safe enough to tell their story."

"We're part of a multidisciplinary team, with the prosecutors, law enforcement, the forensic interviewers, counselors and medical personnel," Holland said. "It's very satisfying knowing you're a voice for that child when they didn't have one before. We're proud to work side-by-side with the interviewers and all the staff."