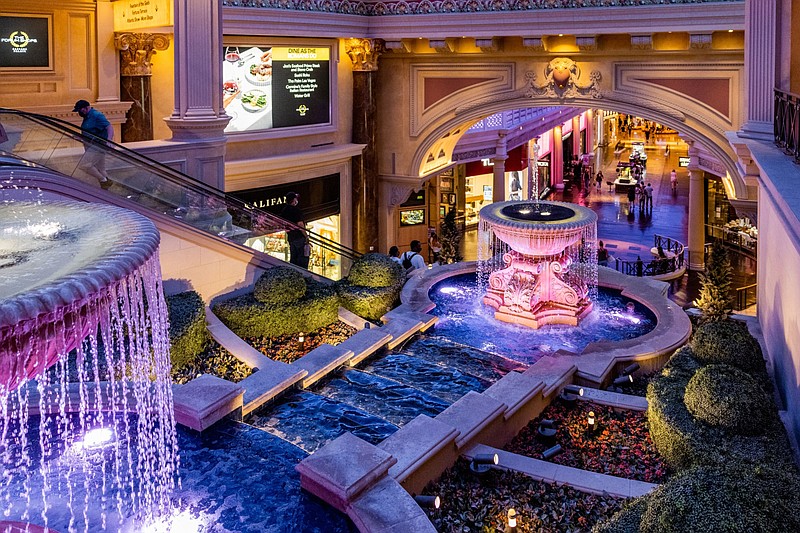 Visitors walk through the Forum Shops at Caesars Palace hotel and casino in Las Vegas, on May 2, 2021. MUST CREDIT: Bloomberg photo by Roger Kisby.

No one could mistake the Margaritaville Resort Casino in Bossier City, La., for a Ritz-Carlton or Four Seasons. One online reviewer complained last month that their room was "tired," with cigarette burns in the carpet, a dirty toilet and dust on the lights.

But a weekend stay this month at the property along the Red River costs as much as $429 a night, reflecting the boom times that casinos across the U.S. are enjoying as patrons, particularly younger ones, begin to splurge with the money socked away during the pandemic.

Gambling revenue at the Margaritaville, which opened in 2013, more than tripled to $19.7 million in March from $6.5 million a year earlier. Month-to-month, the increase was 52%, according to Louisiana state records.

What's driving the results is pent-up demand for fun. Limits on other entertainment options, such as concerts, movies and live sports, have helped. At the same time, casino operators have gotten smarter since the pandemic forced them to shut down last year. They've learned to get by with fewer employees and are wasting less on the amenities that were money-losers in the best of times.

The fastest recovery has been at regional casinos, which guests typically get to by car. Las Vegas, heavily dependent on air travel, has yet to fully bounce back. Overall visitation in March was still 40% below 2019.

Casino operators have been able to keep costs low by only bringing back employees when needed and holding back on the customer incentives that used to be one their largest expenses, said Chad Beynon, an analyst with Macquarie Securities.

"They don't have to give you a $20 slot coupon to get you to come to the property," he said. "You have this new customer that generally wasn't in your casino. It's tough to say if that's the stimulus checks or the fact that there's nothing else going on in the country."

Wall Street is cheering. While the explosion of online gambling and sports betting accounts for a lot of the euphoria driving casino stocks, a new industry meme, "the Roaring '20s," is also at play. Caesars Entertainment, the largest operator of casinos across the U.S., has climbed as high as $106 from a 2020 low of $6 in March 2020. Penn National soared to $142 from a low of $3.75, before retreating to around $81.

Visitor traffic is about where it was before the pandemic and spending per guest is up, Jay Snowden, Penn National's CEO, told investors recently. Younger gamblers give him a chance to add names to his customer-loyalty database. And older patrons, those 55 and up, "have been gaining momentum, particularly in April."

Caesars CEO Tom Reeg said the recovery is likely to be powerful and enduring.

"If you're thinking this is a short-term situation, I think you're wrong," Reeg said when asked how casinos would fare when other entertainment options return. "I don't spend a lot of time worrying what happens when we can go to a movie theater or get out to a cruise ship."

There are even signs the industry is returning to its free-spending ways. Caesars is bringing back the Bacchanal Buffet starting May 20 at its namesake Las Vegas resort, featuring delicacies that include heaping trays of crab legs and foie gras PB&J treats.

However, not every casino executive is all-in on the never-ending boom thesis -- even if near-term results suggest a powerful recovery is underway.

Las Vegas-based Boyd Gaming reported a doubling of quarterly profit earlier in May. Its profit margin in Las Vegas, where the company caters mostly to locals, set an all-time high of nearly 50%.

"I think the best way to think about margins from our perspective is that, look these margins are incredible," Josh Hirsberg, Boyd's chief financial officer, said on an investor call. But Keith Smith, the company's CEO, expressed doubts.

While the recent return of older customers has delivered a nice bump, the current level of spending may not be sustainable, he said.

"How long does that last?" he asked. "Is that a new level of play for all of '21? Is it for a couple of months? I think those are some of the uncertainties."