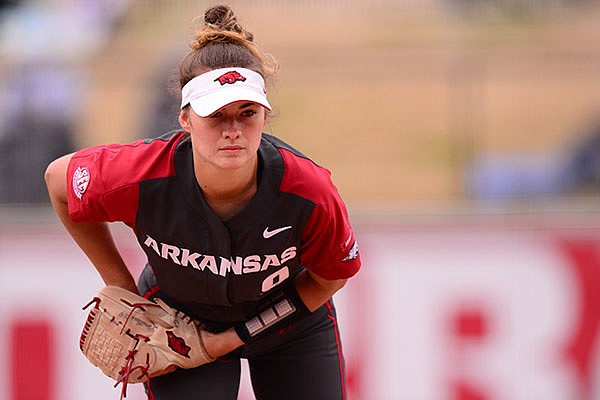 Arkansas pitcher Autumn Storms is shown during a game against Alabama on Saturday, April 10, 2021, in Fayetteville.

FAYETTEVILLE — University of Arkansas softball Coach Courtney Deifel said her team enjoyed the much-needed downtime of being off for the final weekend of the regular season.

Now the focus is on the next challenge — the SEC Tournament, which begins today in Tuscaloosa, Ala.

“I think everybody’s in a great mindset,” Deifel said. “We had time to enjoy it and let it soak in a little bit. We know this is what we’ve been grinding for is to start the postseason.” No. 6 Arkansas (40-8) earned a share of its first SEC regular-season crown, and the team got the opportunity to soak that in last week. It will be the No. 2 seed in the tournament after losing out in a tiebreaker to co-champion Florida.

The Gators are the top seed since they took two of three from No. 3 seed Alabama. The Crimson Tide won two of three against Arkansas during the regular season.

The Razorbacks picked up a bye to the quarterfinals and will face the Texas A&M-Tennessee winner at approximately 4:05 p.m. Central on Thursday. Every tournament game will be on television.

The finals, scheduled for Saturday afternoon, will be on ESPN2. Every other game will be on the SEC Network.

The NCAA Tournament Selection Show will begin at 8 p.m. Sunday on ESPN2.

Deifel said she wasn’t too excited about having the final weekend off when the schedule initially came out, but it’s turned out to be a blessing.

“As a coach, you start to think of all the different scenarios,” Deifel said. “Now that we’re sitting in it, I’m really glad that we have it. And I know the players feel that, too. You’re able to come off our last weekend [at LSU] and just take a breath, focus on finals and appreciate what we’ve done.” The rest has been especially good for pitchers Mary Haff and Autumn Storms, Deifel said. Haff pitched in all three of Arkansas’ games in Baton Rouge, while Storms is still working to get healthy.

Outfielder Hannah McEwen said the Razorbacks will continue doing what’s made the team successful all season.

“Why change anything?” McEwen asked. “It’s just about staying within yourself and staying focused. Overall it’s just being Arkansas softball and not worrying about anyone else.

“A lot of it is getting ahead of yourself. That distracts you from what you’re doing in the moment. You can’t be successful in the moment if you’re worried about who you’re gonna get next. What team? What pitcher? There’s no point in thinking about it until the game that you’re playing is over.” The Razorbacks have been rewriting history all season long, but they will need to do it again this week. Arkansas has had problems in the SEC Tournament, especially recently. It has a 2-9 SEC Tournament record in the past 20 years. Both of those wins came in 2018 when the Razorbacks advanced to the semifinals before losing 3-1 to South Carolina.

McEwen, who earned All-America honors last season, believes the tournament is another opportunity to silence any naysayers.

“A lot of people still doubt us and don’t feel like we should be SEC champions,” the junior from San Diego said. “It’s just another opportunity for us to show people who we are and validate it for ourselves and prove to ourselves we’ve done what we needed to do.”

At Rhoads Stadium, Tuscaloosa, Ala.