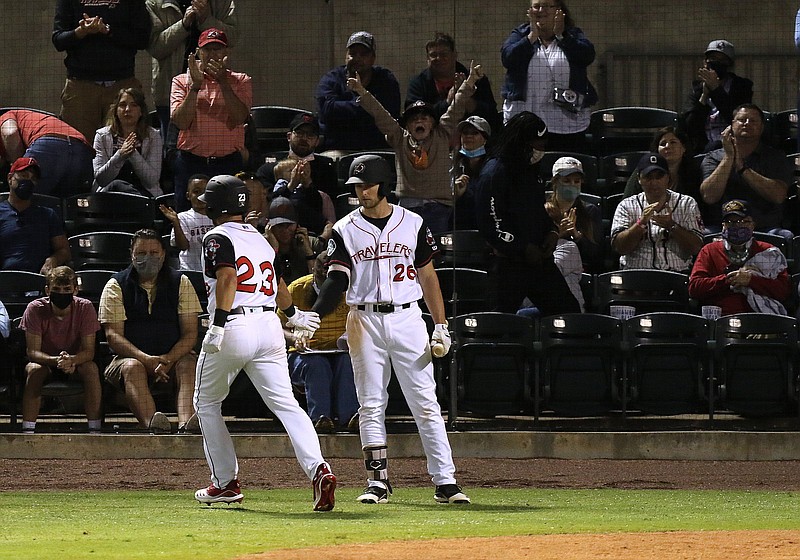 Fans cheer as Arkansas Travelers' Jake Scheiner (23) is congratulated by teammate Keegan McGovern (26) after Scheiner hit a home run during the bottom of the fourth inning of the Travelers home opener on Tuesday, May 4, 2021, at Dickey-Stephens Park in North Little Rock. .More photos at www.arkansasonline.com/55travs/.(Arkansas Democrat-Gazette/Thomas Metthe)

By simply walking through the main gate of Dickey-Stephens Park just after 6:10 p.m. Tuesday, Kelly Troy earned a distinction: He was the first fan to walk through the entry way since September 2019.

Troy wore a blue Arkansas Travelers jersey with red sleeves and a grin, and ambled to his seat along the first-base side holding the hand of his young grandson, James. For the pair, the walk to their seats next to Section 104 was a year and a half in the making.

"We really missed being here last year," Troy said. "We used to come here all the time, and James loves it just as much as I do. It's great to be back."

Grandfather and his grandson were among the 3,581 fans who returned to the ballpark in North Little Rock following the cancellation of the 2020 season, and saw the Travelers fall 7-4 to the Northwest Arkansas Naturals on Opening Day.

The teams treated the eager crowd to a slugfest, hammering a combined six home runs among the 14 hits. Nick Melendez's fifth-inning home run -- his second of the night -- handed Northwest Arkansas a 5-3 lead and canceled out the Travelers' three-run fourth, which included back-to-back blasts by Jake Scheiner and Keegan McGovern. The Naturals padded the lead with runs in the seventh and eighth innnings, as Andres Nunez (1-0) secured the season-opening victory.

Kansas City Royals top prospect Bobby Witt Jr. played shortstop and went 0 for 5 at the plate with a pair of strikeouts in his Northwest Arkansas debut. Travelers catcher Brian O'Keefe recorded two hits, including Arkansas' third home run of the game before the Travelers brought the tying-run to the plate in the ninth inning but fell short.

"They got some timely hits," Travelers Manager Collin Cowgill said. "Melendez hit a couple of homers. There's not a whole lot that we could have done better. I think we competed really well, especially for the first time out.

For many of the fans in attendance, barred from the stadium for the last 20 months, the result mattered little.

"I don't even care if they lose tonight," Alyssa Frisby, sitting in the left-field berm, said pre-game. "After two years, we're just happy to be back here."

The crowd whirred in the moments between the singing of the national anthem and first pitch, then let out a collective groan when Travelers starting pitcher Alejandro Requena walked Naturals lead-off man Clay Dungan. When Requena followed the walk by striking Witt out on three pitches, the crowd let out two years' worth of appluase and Melissa Breese jumped straight out of her seat.

Breese missed the atmosphere and community of nights and afternoons spent at Dickey-Stephens over the empty months of the 2020 season but only bought her ticket to Tuesday's game one hour before first pitch when she saw on the news that the Travelers were playing. She printed her ticket and bolted to the ballpark from Cabot.

Breese shot out of her seat again in the second inning and shouted toward home-plate umpire Isaias Barba when Dairon Blanco -- who walked three times -- beat a tag to score on Brewer Hicklen's RBI single, handing Northwest Arkansas a 1-0 lead.

"This is the best," Breese said. "It's amazing to be out here finally and being a part of it. This is how it's supposed to be. This is normal again."

Melendez stroked a two-run home run in the fourth inning, and Requena exited soon after. The right-hander struck out 4 batters, walked 5 and allowed 3 runs over 3 1/3 innings.

The Travelers drew level with three runs in the fourth inning. Scheiner homered to left field and McGovern followed by sending a ball that left his bat at 105 mph over the right-field wall. Stephen Wrenn's two-out double later scored Connor Lien and tied the game at 3-3.

Schiener's home run sailed directly toward Kevin Keever, sitting in an Adirondack chair above the berm in left field. and sporting a red-brimmed Travelers cap.

Keever attended the last game at Dickey-Stephens Park on Sept. 5, 2019 before covid-19 became a household term and plans to be at as many of the Travelers' 60 home games in 2021 as possible. When he finally made it back to the ballpark Tuesday, he posted a photo of from his seat on Facebook captioned with a quote from the film "Field of Dreams" -- "Is this Heaven?"

"I missed coming out and watching live baseball," Keever said. "It's fun to be here. You can make friends with strangers you may never even see again. But you're here for the same basic reason."

No more than 100 feet away sat Alyssa Frissby and her husband Matthew in a one of the reserved sections of the berm, one of the several socially-distanced seating options around the ballpark.

"Being able to come here and know that we're in the berm with a reserved space was something that appealed to us," Alyssa Frisby said.

Naturals first baseman Nick Pratto homered in the seventh inning to extend the lead and Rudy Martin scored on Dungan's sacrfice fly in the eighth as Northwest Arkansas pulled away in the series opener.