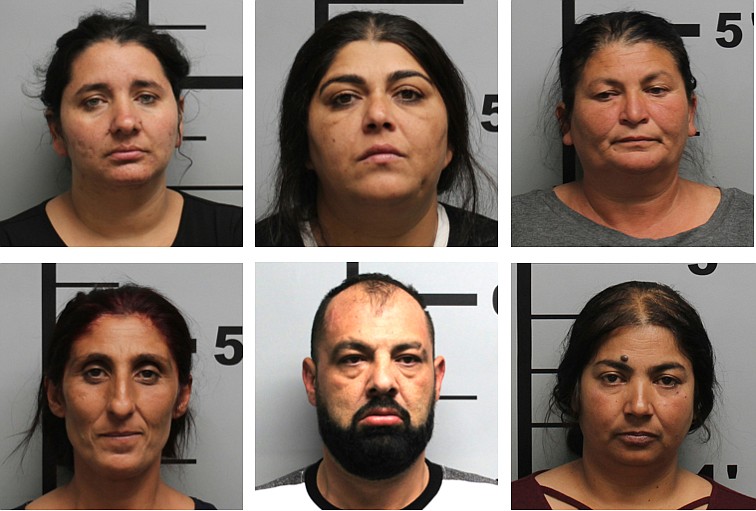 ROGERS -- Six people have been arrested in the invasion and burglary of a Vietnamese Buddhist temple, according to the Benton County sheriff's office.

The temple is in a residence at 10957 Lakeside Drive in Rogers, according to a sheriff's office news release. The invasion happened April 20.

Marta Chicui, Francisca Velcu, Floarea Miclescu, Voinea Gratiani Miclescu, Claudia Velcu and Narcisa Velcu are accused of accomplice to robbery, accomplice to residential burglary, criminal trespass and assault in the third degree. They were released from custody after posting bail.

The six were listed as Romanians in arrest reports.

Prosecutors have not filed formal charges against the six. They are scheduled for arraignment June 7 in Benton County Circuit Judge Robin Green's court.

Detectives believe others were involved, but they likely left the area, police said. Some of the suspects have been connected to other Buddhist temple burglaries in California, Arizona and Oklahoma, according to the release.

Four women went to the Rogers temple April 18 and asked for prayers for a family member, according to reports. The lone occupant of the house told the women that ceremonies were being done only in Vietnamese because of covid-19.

One of the women asked to use the restroom, according to the release, while the other women tried to distract the female occupant but were unsuccessful. When she asked them to leave, they became agitated.

Two days later, five women and one man returned and forced their way into the home and temple, according to the release.

Lt. Shannon Jenkins, a sheriff's office spokeswoman, said a lone occupant was at the residence, and she ran away and was not injured.

Similar invasions have happened across the country. Detectives believe the temples are targeted because of the passive nature of the occupants and their practice of accepting donations, usually in cash, Jenkins said.

Individuals, usually women, enter the Buddhist temples and ask to be blessed and prayed over. While the women are being prayed over, additional suspects move from room to room and steal money, donation boxes or jewelry. The suspects have used mini vans and typically have a lookout person nearby, according to the release.