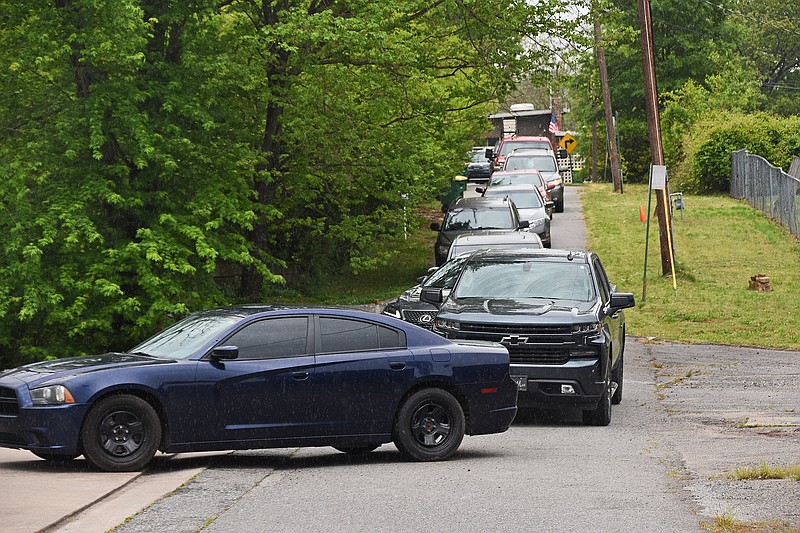 Changes have been made to pickup and drop-off areas at Amboy Elementary in North Little Rock in an effort to deal with an ongoing traffic issue, but officials said that to solve the problem, the school district might have to buy a piece of property near the building.

Pennington said the current route for drop-off and pickup at the school is causing traffic to cross Military Drive during dismissal time, which usually lasts 10 to 15 minutes. He said this causes cars in the dismissal line to block the exits and entrances of a nearby McDonald's and Valero gas station on MacArthur Drive.

"McDonald's employees have told us how the traffic has caused several accidents," Pennington said.

Vehicles also enter Auburn Drive from MacArthur Drive to get to the school, which blocks entrances for almost an hour.

Michelle Holt, president of the Amboy Neighborhood Association, told the Arkansas Democrat-Gazette on Friday that the traffic problems have become a safety issue.

"When school gets out, the traffic blocks residents and it blocks the intersection," Holt said. "The traffic can also run into residents' yards as people try to get a closer spot. It also blocks the ambulance bay, which is located in the neighborhood. When the traffic spills out onto MacArthur Drive, it blocks a heavily traveled intersection, and wrecks happen because of it often."

A short-term solution to the problem is opening a gate at the school that has been closed for many years.

"We did some research on why the gate was closed, and evidently at some point somebody at the Fire Department told them the school gate needed to be locked," Hatch said. "When we talked to the fire chief, he told us that he would recommend the gate to be opened because of the traffic issue."

Hatch said he believes that opening the gate will speed pickup and drop-off times by at least 20 minutes.

The School Board gave Pennington permission to open the gate, which will allow cars to turn directly onto MacArthur Drive, as a short-term solution. Board member Natalie Wankum said opening the gate will alleviate the bottleneck in the school's parking lot.

"We need to open the gate and release the flow," she said.

Pennington told the board that a potential long-term solution is to buy the vacant property in front of the school and turn it into a parking lot or a roundabout.

"It will give cars an alternative spot to park and would decrease the amount of cars in the neighborhoods," he said.

The issue with that idea is that the property is being pitched to the city as a location for a tire shop, which is opposed by the school and members of the neighborhood.

"I am not sure if the property owner got wind of the neighborhood opposition or heard from the school, but it wasn't on the agenda," she said. "I know our aldermen are not going to be supporting it. We are also currently passing around a petition in opposition to the tire shop."

Holt said there are multiple reasons, which go beyond just the traffic issues, for the neighborhood's opposition to the tire shop.

"We have several tire shop businesses in Amboy, and we don't want to see another one due to them not being aesthetically pleasing," she said. "It's a small building, and we aren't sure where they are going to store their tires.

"Our concern is broken-down cars being parked overnight or for an extended amount of time."

Holt said that when the neighborhood learned about the school's interest in the property, it seemed like the best solution for those in the area.

"There are concerns about how a tire shop would affect the school as well," she said. "We are worried about the kindergarten and pre-k students who are in the front of the building who will have to listen to a tire gun all day long. It's already hard to keep their attention. Also concerned about safety, since we won't know the clientele or employees who are that close to the school.

"We would definitely like to see it purchased by the school district."

Superintendent Gregory Pilewski told the School Board that he wasn't sure how much the property costs because he wanted to gauge the board's interest first, but he said he would inquire about the intentions of the property owner.

School Board member Dorothy Williams expressed concern that if the property owner knows how much interest the school district has in the property, then it might lead to an increase the price.

Board member Tracy Steele said he spoke with the property owner and that he seemed willing to work with the district.

"They are part of the community, and I don't think they will force the price up," he said.