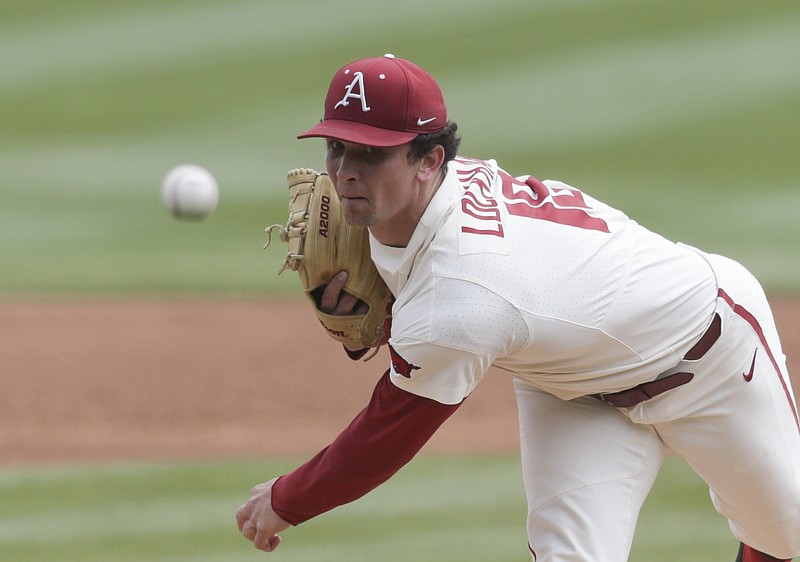 FAYETTEVILLE -- The Arkansas Razorbacks are alone atop the SEC baseball standings after taking two of three games at LSU and likely will be the consensus No. 1-ranked team in the country for the fourth consecutive week when the national polls are released today.

The University of Arkansas (34-8, 15-6) has the best conference record -- one game ahead of Mississippi State, Tennessee and Vanderbilt, which all are 14-7.

But finding a reliable third starter for the final three SEC series and postseason play is an issue for the Razorbacks despite their impressive record.

Left-hander Lael Lockhart, a senior graduate transfer from Houston, has been the No. 3 weekend starter for most of the season, and he leads the Arkansas with 10 starts. He has made starts in six of seven SEC series.

But Lockhart might not get another shot to be an SEC starter after his struggles in the second game of Saturday night's doubleheader when LSU held on to beat the Razorbacks 5-4 at Alex Box Stadium in Baton Rouge.

Lockhart (1-2, 5.06 ERA) lasted 1/3 of an inning before Arkansas Coach Dave Van Horn had seen enough and pulled him in favor of Zebulon Vermillion.

Facing five batters, Lockhart allowed two hits -- including a three-run home run by Cade Doughty -- hit a batter, issued a walk and had a wild pitch.

Lockhart pitched for the first time in two weeks because he didn't start at South Carolina the previous weekend, but Van Horn said he didn't believe the layoff was a problem.

"It looked like a bad day to me," Van Horn said. "He bounced a ball that hit a guy. He threw one over the catcher's head.

"Bounced another ball that came up and hit the bat -- I don't know if I've ever seen that -- and just was struggling out there.

Junior left-hander Patrick Wicklander (3-1, 1.89 ERA) has solidified his spot as the Razorbacks' No. 1 starter after going 6 2/3 innings and holding LSU to 3 hits without a walk and 5 strikeouts in Arkansas' 7-0 victory on Friday night.

"He's really been good three or four times in a row in our opinion," Van Horn said. "He just really does a good job of repeating his delivery. He's throwing the fastball on both sides of the plate and he's not walking anybody.

"I do believe that he's healthy, and I think that's a big part of it. He's strong and healthy."

Sophomore right-hander Peyton Pallette (1-2, 4.02 ERA) has been solid most of the season in a starting role. His last three starts he's gone 15 1/3 innings and allowed 10 hits, 4 runs and 5 walks with 13 strikeouts.

Pallette looked to be in the line for the victory in Saturday's opener when the Razorbacks won 17-10 and were leading 12-2 going into the bottom of the fifth inning.

But when Pallette walked the leadoff man on four pitches, Van Horn went to the bullpen.

Van Horn said it was a "pretty good pitching performance from Pallette," but that his control was a concern. Both runs he allowed were on wild pitches.

"He was not very sharp at the time," Van Horn said. "That's why we pulled him."

With Wicklander and Pallette continuing to be the 1-2 starters in SEC series, Van Horn and pitching coach Matt Hobbs need to decide who will be the No. 3 starter for this weekend's series against Georgia (27-16, 10-11) at Baum-Walker Stadium.

"You can't be satisfied with where we're at now," Van Horn said. "We've got to get that figured out."

Connor Noland became an SEC starter as a freshman in 2019 and was set to be in that role again in 2020 before the season was canceled because of the coronavirus pandemic after 16 games.

But Noland has been limited to 5 2/3 innings this season because of arm soreness.

With Arkansas leading LSU 16-3 going into the seventh inning of Saturday's opener, Noland made his first appearance since March 5 and got just two outs. He allowed 6 hits and 6 runs while facing 8 batters, including home runs by Zach Arnold and Drew Bianco.

"He's got to be able to locate a fastball, which he didn't do unfortunately," Van Horn said of Noland's struggles. "He hung a couple breaking balls and they left the yard. His slider was down and out.

"He just had trouble commanding the ball, and when he did throw strikes, they weren't quality strikes, and they hammered him. To get that fixed, it's going to be up to him. He's going to have to throw the ball where he wants to."

Van Horn gave a blunt response when asked if he feels good that with enough work, Noland can regain the form that made him an SEC starter.

Some pitching issues aside, the Razorbacks won only their second series ever at LSU -- they swept the Tigers on the road in 2004 -- and have won their first seven SEC series for the first time since joining the conference in 1992.

"It's a great job by the team," Van Horn said. "It's hard to win every weekend. It doesn't matter if you've got three All-American pitchers, it's tough to beat a team two out of three every weekend in this league because everybody's so talented.

"Sometimes it just doesn't go your way or you're lining out or plays aren't being made. So I'm proud of the guys. They show up every weekend and they give you a great effort. I've told them that many a time."

Arkansas improved to 11-4 on the road. In addition to LSU, the Razorbacks have won road series at No. 18 Louisiana Tech, No. 5 Mississippi State, No. 14 Ole Miss and No. 15 South Carolina.

"I like where we're at," Van Horn said. "We've played an incredibly tough schedule because we've had to play a lot of the big boys on the road and we've handled ourselves pretty well."