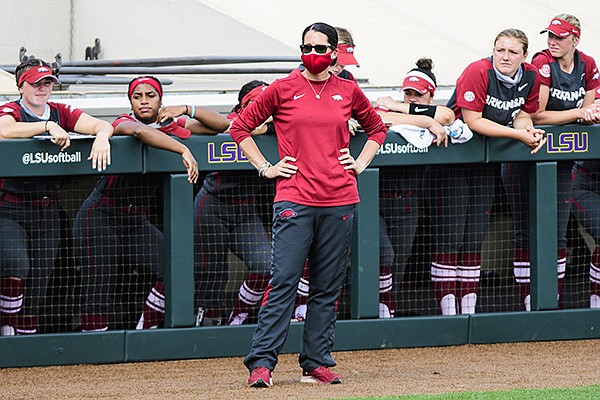 Arkansas softball coach Courtney Deifel stands in front of the dugout during a game against LSU on Monday, May 3, 2021, in Baton Rouge, La. (Photo by Rebecca Warren, LSU Athletics, via SEC pool)

Arkansas clinched a share of its first SEC softball championship with a doubleheader split at LSU on Monday.

The Razorbacks’ 4-1 victory over the Tigers in the finale assured Arkansas can finish no worse than a tie for first place in the conference.

Arkansas will win the SEC outright if Florida loses any of its three games against Texas A&M this weekend. If the Gators sweep the Aggies, Arkansas and Florida would share the SEC championship.

The No. 7 Razorbacks won the SEC by winning a series in Baton Rouge, La., for the first time since 2005.

Arkansas defeated the No. 14 Tigers 1-0 in the series opener Saturday, but LSU evened the series with a 2-1 victory in the first game of Monday’s doubleheader.

Linnie Malkin and Kayla Green hit solo home runs for the Razorbacks in Monday night’s finale. Hannah McEwen also scored on a passed ball in the first inning and Green scored on Aly Manzo’s fifth-inning double to cap the scoring.

The Razorbacks’ SEC championship comes in the 25th season since the program was established in 1997. Prior to this year, Arkansas had finished with a winning record in SEC play only three times.

SEC coaches picked the Razorbacks to finish sixth in the preseason poll. Arkansas had never finished better than third in the conference standings.

The SEC championship comes five years after Arkansas finished 1-23 against SEC teams for the second consecutive season under its first-year coach Courtney Deifel. But Deifel has led the program to steady growth, including the Razorbacks’ first super regional in 2018 and their first top-10 national ranking this year.

“They came here to change this program and I’m just so incredibly proud of these players and just committing to it every day, and moving this thing forward,” Deifel said on SEC Network following Monday night’s game. “They have been so tough this year and they absolutely deserve this. I’m just so, so proud of them.”