Abandoned wells a drag on Arkansas

Hendrix research says much acreage could be reclaimed, put to profitable use by Ashton Eley | May 3, 2021 at 7:17 a.m. 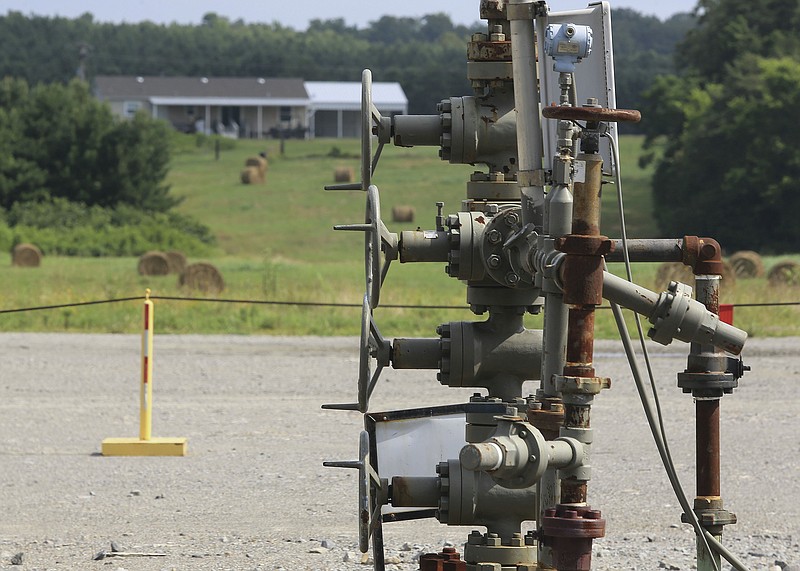 Arkansas Democrat-Gazette/STATON BREIDENTHAL --7/6/16-- Verlon Abram has several natural gas wells on his property in Cleburne County, including several within sight of his house.

Nearly 80% of Arkansas' more than 47,300 oil and gas wells sit spent and abandoned, data show, and Hendrix College professors and students have found that these unused well lands, along with thousands like them around the U.S., are leaving billions of dollars on the table.

More than 430,000 oil and gas wells across the country are nonproducing, according to energy software firm Enverus, when the nearly 2 million acres they occupy could provide benefits that triple the cost it would take to restore these ecosystems, according to the recently published work by the Hendrix team.

Professors and ecologists Matthew Moran and Maureen McClung started their research with the Fayetteville Shale in North-Central Arkansas around 2019, examining how the wells and their infrastructure were affecting the landscape and the economic costs associated with those impacts.

"These costs are often not part of the conversation," McClung said. "We saw a need to make a case that restoration should be happening after these oil and gas wells run dry, because they basically just exist on the landscape and are doing no good for anybody. It was pretty astounding the number of wells we found sitting useless."

In the mid-2000s, companies arrived in droves and started drilling for natural gas from the Fayetteville Shale, a formation that stretches across the state to the Mississippi River. Drilling peaked in 2008, but development of new wells declined rapidly, hitting near zero by 2016.

The Hendrix researchers found almost one-fifth of the more than 6,230 wells in the Fayetteville Shale were nonproducing in 2020. However, many of them are on well pads that still support other producing wells, and therefore are not currently restorable.

This was far from the first well boom in the state, though. Thousands of wells dot the landscape of southern Arkansas -- reminders of the beginning of commercial oil production in the state and jobs that put food on the tables in towns like El Dorado and Smackover during the Great Depression. By 1925, the Smackover field had become the largest-producing oil site in the world, according to the American Oil and Gas Historical Society.

Lands with nonproducing wells can sit unrestored for years, even decades.

Old wells can leak methane gas and contaminate groundwater, and they are safety hazards for wildlife and communities alike. But what's being lost from these lands can be difficult to quantify financially.

For its work, the Hendrix team looked at agricultural production and carbon storage.

The researchers estimated that restoring the 2 million acres across the nation would cost $7 billion but return $21 billion to the economy over the next 50 years. Agriculture makes up two-thirds of that value.

"With agriculture, the connection between the environment and the economic product is very, very clear," said William Haden Chomphosy, a Hendrix assistant professor of economics who also worked on the project. "The one that's more complex but also very important is looking at the dollar value of the carbon that gets sequestered when these wells are restored ... There are a lot of technical aspects to that, but essentially it's looking at the benefit to society in the future of avoiding the most catastrophic consequences of climate change on a per-unit basis."

When the team added additional, harder-to-estimate ecosystem services values, the benefit-to-cost ratio was even higher.

Much of the land around the Fayetteville Shale is used for farming. They estimated that development is costing the region about $17 million annually, with 95% of that being losses in agricultural production. Other losses include timber production and carbon storage.

The amount and type of benefits would vary by region, but the researchers said restoration would be felt around the country with such benefits as less food insecurity, protection of biodiversity and restoration-related job opportunities. Benefits could be seen particularly in rural America, where most of the wells are, Moran said.

"It's not just carbon storage that's going to come out of this, but habitat being restored, also pastures for cattle," McClung said. "It's a place where people with different priorities could come together."

The professors hope these findings will help further policy decisions that result in the restoration of nonproducing wells.

States do impose fees on oil and gas development, usually in the form of well bonds. These fees vary by state and hardly ever cover full costs.

In 2005, Arkansas created the Abandoned and Orphan Well Plugging Fund. The money comes from oil and gas industry fees, forfeited bonds and proceeds from the salvage of production equipment at abandoned wells.

The Arkansas Department of Energy and Environment's Oil and Gas Commission uses the funds to plug abandoned and orphaned wells, using plugging contractors serving the state's oil and gas industry, department spokesperson Morgan Acuff said via email. The funds can also be used for costs incurred by the commission for other corrective or remediation work at abandoned sites.

Since 2005, more than 770 abandoned oil and gas wells have been plugged and remediated at a cost of about $8.6 million. That's less than 6% of the estimated 13,000 or more restorable wells in the state.

A nationwide bond requirement to cover the cost of reclaiming wells wasn't established until the 1950s, and the value has not increased since. However, federal assistance could be coming.

"The plugging of the wells is supposed to be required for all abandoned wells, but often does not happen," Moran said. "The plugging is important to prevent methane or fluid leaking. After a well is plugged, then the restoration process should happen where they remove all the infrastructure, restore the soil and revegetate the site."