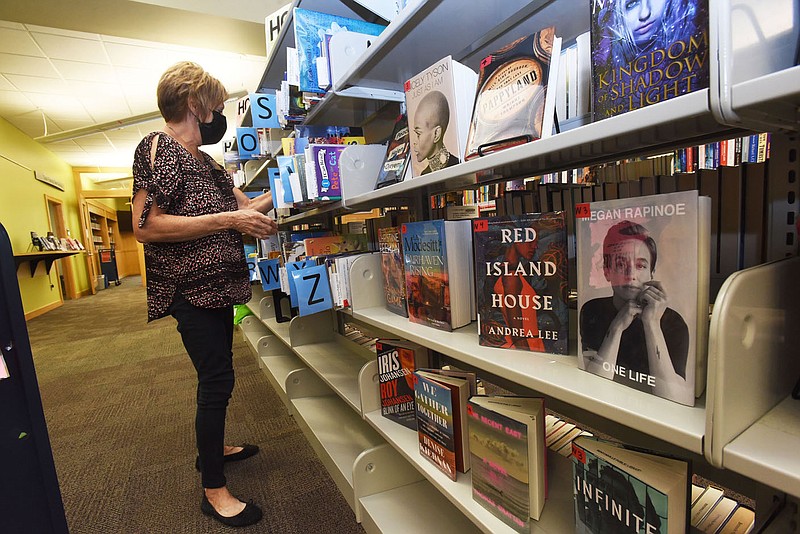 Debbie McDevitt with the Bentonville Public Library staff returns books to shelves on Tuesday at the library. (NWA Democrat-Gazette/Flip Putthoff)

BENTONVILLE — A bigger library plan is yet to be considered beyond what was recently approved in a bond issue.

Voters backed the city’s $266 million bond plan for capital projects and bond refinancing by approving all nine questions on the special election ballot by at least 76%. The city will pay for the bonds by extending a 1-cent sales tax. The tax was approved in 2003 and extended in 2007.

Bond plans for the library call for a 6,400-square-foot addition and renovating 10,000 square feet of the interior. The addition would include a children’s department with a larger story time area and expanded craft space in addition to a teen zone and activity room and maker space at a cost of $4.97 million.

The city hopes to get the design work for the library done with money from the first bond. Money should be available this summer.

The full needs assessment from Minneapolis-based MSR Design shows a proposed 65,055 square feet of new and renovated space — which includes the current 38,500 square feet — at a cost a shade under $15 million.

“In May, a decision will be made about how the library will go forward,” Dudley said. “The full needs assessment option will require a public/ private partnership, similar to the original funding model for our current library facility.”

Dudley said officials from the library, the city and the Bentonville Library Foundation are working together on a decision.

The library launched a study last year to identify growth options. The library contracted with MSR Design and enlisted the help of many others. The public and community partners provided feedback through surveys, meetings and workshops, according to a news release.

It was a six-month project supported by a grant from the Walton Family Foundation in partnership with the library foundation, Dudley said.

Councilman Chris Sooter said the best approach for the growing community is to work toward the full expansion that addresses all the needs identified in the needs assessment community engagement process.

“A single-phased approach provides for optimized efficiency and economies of scale,” Sooter said. “This is the best approach for an all-encompassing 20-year look ahead for the library and community’s needs. The community’s need for a fully expanded library building plan is directly related to the significantly expanding population projections for the city.”

The recommended plan features amenities providing a significant opportunity for the library to address current and future needs in a thoughtful manner, Dudley said.

The needs assessment shows a site for outdoor programming with learning gardens, outdoor reading rooms, play areas and walking paths. Most of the building is well utilized, but the suggested changes include more study rooms, updating and expanding the children’s area, and adding an activity room that is centrally located. There’s also a need for an additional meeting room for 300 or more people.

“It’s important to understand that the library’s needs assessment study is a road map that interprets community feedback in conceptual plans,” Dudley said. “The next step is determining which plan will most appropriately and best serve our community’s needs. Then, we will publish a request for qualifications documents seeking professional design services and a construction manager.”

Candice Johnson of Bentonville said she would like to see more space in the children’s area for cozy reading time for families. A larger, more defined space for hands-on learning, crafts and play for children would be great, too, she said.

“We enjoy visiting the Rogers and Fayetteville libraries primarily for their larger children’s areas,” Johnson said. “I’d love it if the adult book section felt more welcoming and open — creating more of a bookstore vibe rather than uniform shelving that doesn’t always make browsing for my next book as fun as it could be.”

Johnson said she grew up going to the public library when it was downtown on Central Avenue. She said there’s something nostalgic about taking her son to discover new books. They love storytime and are eager for that to start back up again, she said.

“Many of our residents are very engaged with the library and many more citizens will be interested in the new amenities an expanded library will offer both indoors and outdoors,” Sooter said.

The needs assessment outlined options for more square footage and amenities not included in the bond option, Dudley said.

The library foundation is committed to supporting the library’s expansion project, she said.

The library was a $9 million project in 2006. The library foundation raised $7 million through contributions from individuals, corporations and foundations. The city committed $2 million, Dudley said.

In November, the City Council approved an agreement with the library foundation to purchase two pieces of property adjacent to the library for $1. The parcels are just north of Southwest Fourth Street.

In October, the City Council unanimously approved an agreement with the Charles H. and Marilyn S. Turner Revocable Trust and Lawrence H. and Linda J. Hawkins for $850,000, plus closing costs estimated at $9,000 and $10,000 earnest money for the purchase of 401 S. Main St. An additional $19,800 will pay for other services associated with the purchase. The property will provide greater expansion opportunities for the library, according to council documents. The money came from city reserve.

MSR’s recommendations for the Bentonville Public Library are viewable online at bplexpansion.org . Hard copies of the report are available for check out from the library.