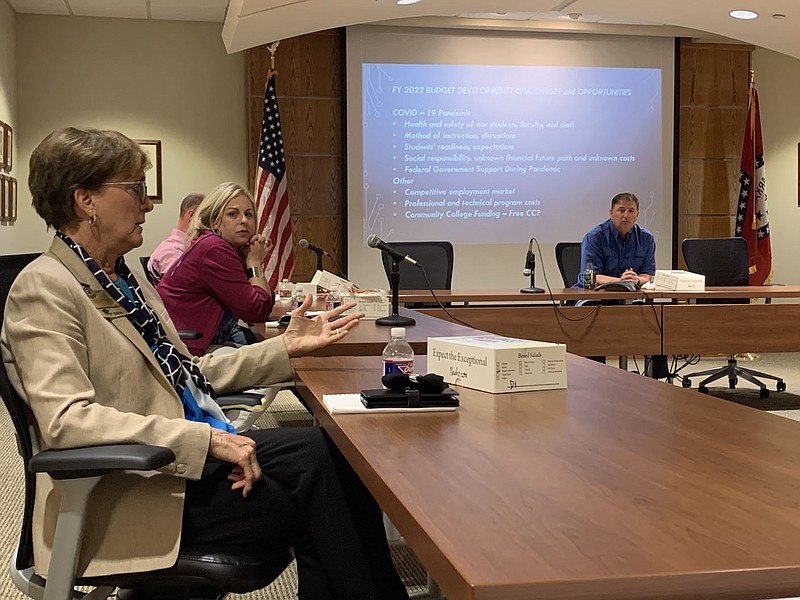 BENTONVILLE -- Northwest Arkansas Community College is proposing a budget of about $42 million for fiscal 2021, with no plans to raise tuition or fees, administrators said.

The college's trustees held a work session Friday to discuss the budget, which is based on the college's current $41.7 operating budget combined with an estimated addition of $618,000 for 2021, said Gulizar Baggson, associate vice president of finance and administration. The projected change is an about 1.48% increase from fiscal 2020.

The college had 398 full-time staff members as of April 16, Baggson said.

The college, a state institution, receives money from its taxing district, which consists of the Rogers and Bentonville school districts, said Liz Kapsner, communications associate director. Tuition and fees make up about half of the college's revenue.

The college has no plans to raise tuition or fees for the 2021-2022 school year, said Al Massri, vice president of finance and administration.

"We know what every citizen has been going through this year," he said.

"Students have suffered a lot," she said. "To come back and raise tuition would be devastating."

The college hasn't increased the in-district tuition rate -- paid by residents of the college's taxing district -- since 2013.

A year ago, Jorgenson indicated an in-district tuition increase might be coming in the 2021-22 academic year. She noted at the time even if the rate were adjusted only for inflation since 2013, that $75 per credit hour would become $83.

Students received $6,345 in Pell grants in 2021 and are anticipated to receive $6,495 in grants for 2022, an increase of 7%, Baggson said. Pell grants are federal subsidies for certain students who meet federal eligibility requirements for financial aid.

The board will vote on the proposed budget at the May 10 board meeting, Jorgenson said. The new fiscal year begins July 1.

The college has campuses in Bentonville and Springdale and more than 8,000 enrolled students.

Five members of the board were present for the session. Jorgenson said board members Mark Scott, Joe Spivey and Todd Schwartz were previously briefed on the proposed budget. DeAnne Witherspoon will be briefed next week, she said.

"It was impossible to find a date and time when everyone could be there," Jorgenson said.