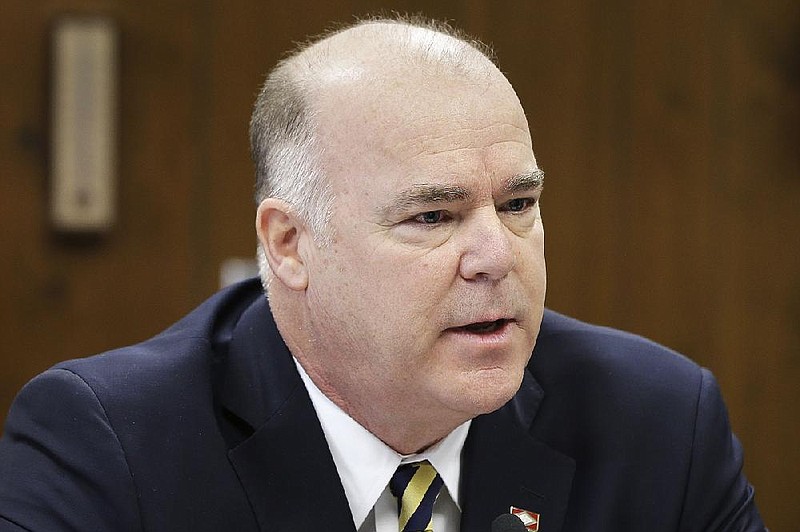 The Arkansas Senate will soon weigh a proposal that would create something sought for a decade -- a commission to hear taxpayers' appeals.

And the Joint Budget Committee will grapple with how much money and how many positions to give the new commission.

House Bill 1468, by House Revenue and Taxation Committee Chairman Joe Jett, R-Success, would create the Independent Tax Appeals Commission within the Department of Inspector General, starting July 1, 2022, to resolve disputes between the state Department of Finance and Administration and taxpayers.

Under current law, a taxpayer who receives a proposed assessment or refund claim denial from the finance department can protest the decision to the agency's Office of Hearings and Appeals, which consists of two administrative law judges, the department said in its legislative impact statement on HB1468. The administrative decision is appealable to an Arkansas circuit court. The state House of Representatives on Thursday approved HB1468 95-0.

"If you have a tax issue with DF&A and you appeal that process to DF&A, DF&A are the enforcement and ... the judge and the jury right now," Jett said.

He said that for the past 10 years, there's been a push to create an independent appeals commission and "for whatever reason, we just had a hard time getting it all lined up."

"While I served as director of DF&A, one of the things I dreaded the most was reconciling these appeals as they came in and ultimately they would wind up on my desk," he said.

Wooten said he was put in the position of either ruling against his staff or against the taxpayer, which was "a really kind of an untenable position."

"But many times I had to come down on the side of the taxpayer. Well, that didn't set really well [with his staff]. But this will do away with that," he said.

Randy Zook, president and CEO for Arkansas State Chamber of Commerce and the Associated Industries of Arkansas, said Wednesday in a written statement, "We've been working on this at least 10 years."

More than two-thirds of states have an independent tax tribunal and Arkansas is one of 14 states without one, said Matt Boch, outside tax counsel for the Arkansas State Chamber of Commerce.

The Joint Budget Committee personnel subcommittee endorsed an amended version of House Bill 1567, which would grant the commission spending authority of up $2.5 million and create up to nine positions for it in fiscal 2022, which starts July 1.

HB1567 is now in the Joint Budget Committee.

The nine positions would include three tax appeals commissioners with salaries from $149,862 to $181,500 a year.

Jett told the House Revenue and Taxation Committee on Tuesday that the salaries would be about $170,000 a year.

Boch said he thought the salaries would be "more around $150,000, similar to a district judge rather than a circuit judge."

Bruno Showers, a senior policy analyst at the Arkansas Advocates for Children and Families, said Friday in a written statement, "I think it's fair to have a third-party handle tax disputes, but the devil is in the details. One thing that sticks out is the cost. It does seem fairly high to me."

During the 2019 regular session, Sen. Blake Johnson, R-Corning, had a bill to create an independent tax appeals commission. The Senate approved the bill, but "we just ran out of time to get this thing where we wanted it," Jett said.

Since then, "a lot of people worked pretty hard on this, [and] this is an agreed-upon bill with the inspector general's office, the governor's office, the state chamber folks, business leaders, CPAs, bar association," he said.

Jett said the process of selecting the three commissioners would be aimed at "trying to get it out of the politics."

The governor would appoint them from among a pool of candidates nominated by the Arkansas Bar Association, a majority of the Arkansas Supreme Court and the Arkansas Association of Certified Public Accountants under HB1468, the finance department said.

Each group would nominate three candidates, and the governor would appoint one nominee from each pool.

Appointments would be made by July 1, 2022, said Paul Gehring, an assistant revenue commissioner for the finance department.

The initial terms would be staggered in length -- three, six and nine years -- and commissioners may be reappointed under HB1468.

The chief commissioner must be licensed to practice law in Arkansas and be certified in Arkansas as a certified public accountant, the finance department said.

The commission will begin accepting and hearing tax disputes no later than Jan. 1, 2023, under HB1468, according to the finance department.

The finance department's Office of Hearings and Appeals will conclude its decisions by May 31, 2023, and stop operations by June 30, 2023.

"We are not after individual taxpayers' information," he said. "We just want accurate numbers so that way we can kind of see what is going on," he said.

House Bill 1705 by Jett would transfer all duties of the Office of Hearings and Appeals to the Tax Appeals Commission, the finance department's legislative impact statement said. The House on Thursday approved the bill 97-0.

Sen. Jim Hendren, an independent from Sulphur Springs, on Tuesday questioned whether the finance department would reduce the number of employees who handled the tax appeals.

Gehring told the House Revenue and Taxation Committee that the Office of Hearings and Appeals has two administrative law judges and a support staff post, and its annual personnel costs are roughly $250,000.

The finance department also has its own information technology and tax system staff, security officers for the Revenue Division, space in the 1509 Building and overhead costs, he said.

Rep. Lane Jean, R-Magnolia, who is a co-chairman of the Joint Budget Committee, said, "what I am hearing is that in the long-run, it is going to cost the state more to do this, but we believe it will bring fairness to taxpayers that have cases before the state."

Jett said the tax appeals commission would have nine employees, a drop from the initial proposal of 16 employees.

Besides the three tax commissioners, the commission also would have its own information technology manager to safeguard confidential taxpayer information, a staff attorney, an accountant, a law clerk, a tax auditor and a commissioner assistant, he said.

He said the $2.5 million annual price tag probably will be covered by general revenue.

Jett said he has promised Department of Inspector General Secretary Elizabeth Smith that "if we find out we pared back, scaled back too much [from the initial proposal for 16 employees] then the next session we are coming in trying to get her more help over there.