Spring In Bloom: 'Flower Power' blossoms on the walls of Brews 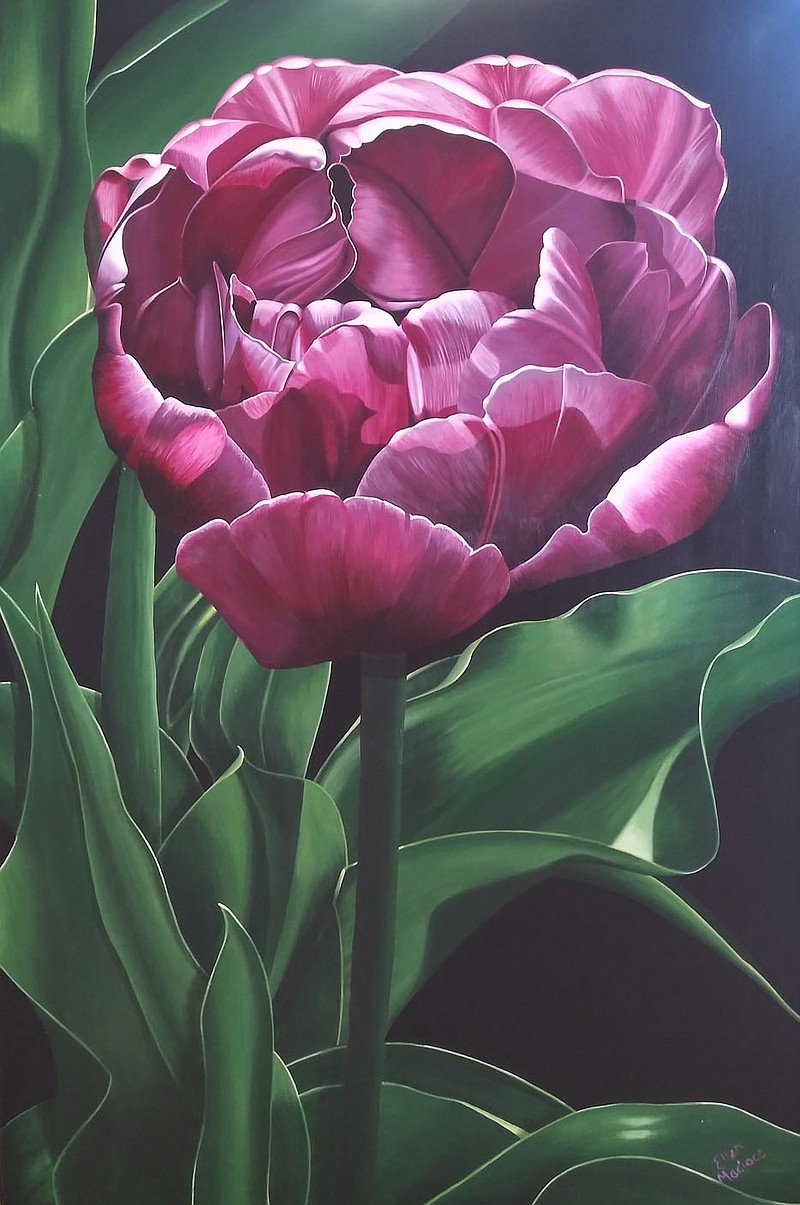 "I always try to invite a combination of artists who work in different mediums," says John Rankine of the exhibitions he curates at Brews, a coffee/craft beer establishment in Eureka Springs. The current show, "Flower Power," includes mediums from watercolor to found-object sculpture captured in a photograph created by 25 regional artists, both those well known for their florals and those who are showing for the first time.

However, in this case, Rankine's primary goal was simple, not profound: "I just wanted something colorful and non-confrontational," he says, "although with Eureka Springs artists, nothing would surprise me."

Rankine's own entry in the show, "Blind Faith," might not be controversial, but it is certainly bears his signature mark of the unusual.

"I received a call in 2020 from a patron (and now friend) about doing a special photograph for his wife's birthday in June," he begins the story. "I had never done a commission piece before and was a little nervous, but excited about doing it."

Rankine says "it's hard to describe the creative process in the photographs I take using inanimate objects. It's a very intuitive process that usually starts with an object that speaks to me on some unconscious level. In this case, it was a ceramic doll mold.

"Talking with my client, I found out his wife was a big Georgia O'Keeffe fan. She loved her work, especially some of her painted skull series. I have a large collection of bones that I frequently use in my work and pulled out the large cow skull.

"Like O'Keeffe, flowers are also important subject matter in my work," Rankine adds. "The flowers in 'Blind Faith' are bougainvillea, a tropical flowering vine that I had transplanted to my greenhouse from when I lived in Key West almost 25 years ago."

While he hopes for beauty, "like all my work, 'Blind Faith' is open for interpretation," he concludes. The client owns No. 1 in the limited edition photograph, and No. 2 is on show at Brews.

Jana Robison's entry in "Flower Power" -- titled "We Were Seeds" -- was inspired by the quote "They tried to bury us, but they didn't know we were seeds," by the Greek poet Dinos Christianopoulos.

While Rankine most often works in found objects and photographs, Robison switched in 2017 from "from traditional to digital painting."

"Although I prefer drawing," she says, "I really like the look of painting, and the process of digital painting allows me to enjoy the best of both mediums. The enjoyable experience of digital painting has motivated me to create a larger volume of work. In recent years, my style has also evolved to express a deeper range of my inner narrative, and as I grow and change, my art mirrors that."

Robison lives with her husband, Edward, a photographer, and their likewise artistic child and says: "Living in a household of creatives is to navigate what is simultaneously a brainstorming studio, an improv club and a maker space. This multipurpose atelier wouldn't be complete without an array of projects happening all at once, at any given moment in time. Another bonus is the surplus of honest feedback and critiques, and networked inspiration from our memories traveling as a family."

As for Rankine, he's "never sure where these symbolic, sometimes archetypal motifs come from. It's an intuitive process, and I am often surprised when meaning strikes me much later. I have learned over the years to trust this process and leave the interpretation to others." 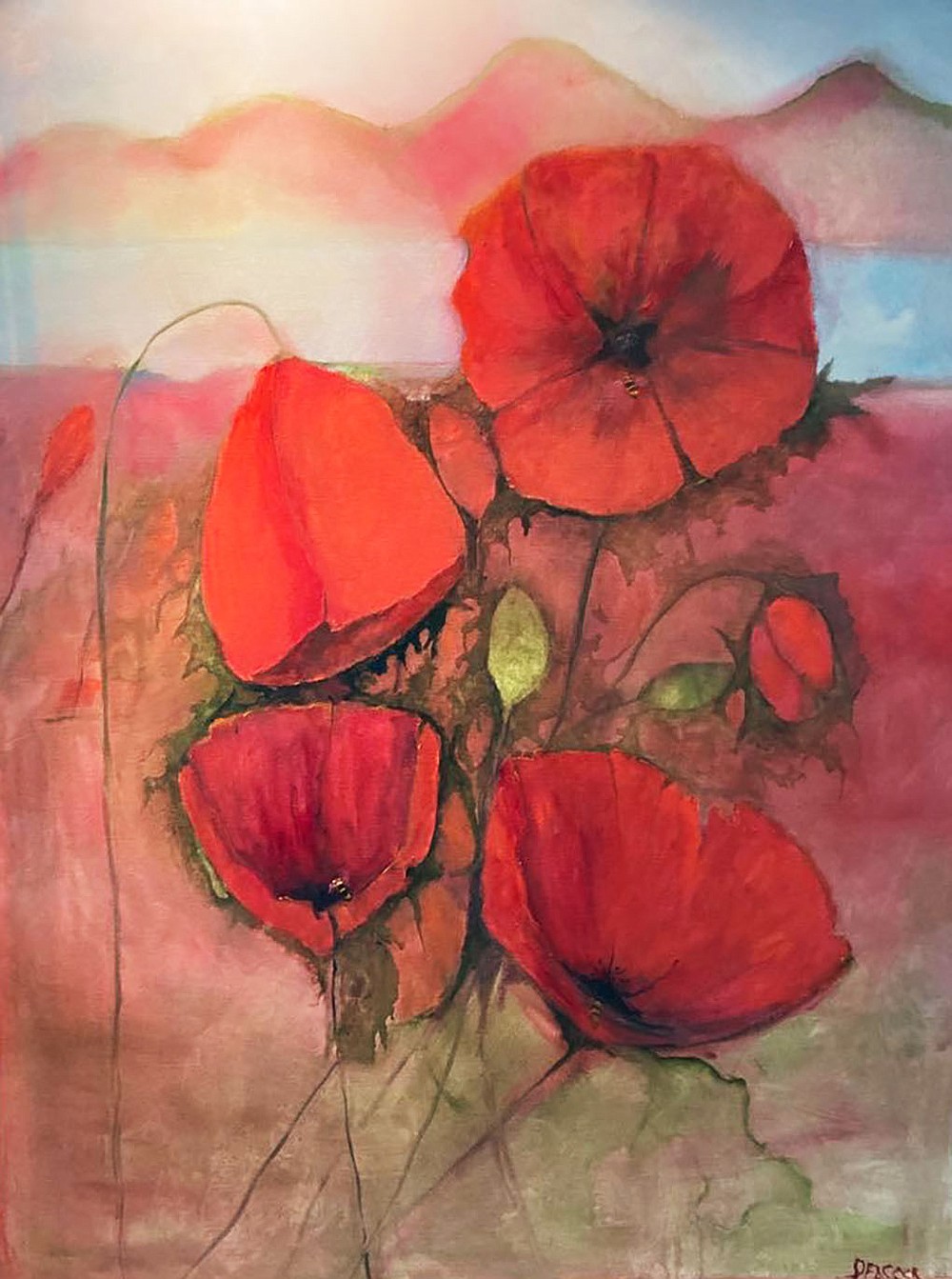 “Poppy Field,” an oil on canvas by Carol Peacock, is also on show in “Flower Power.” (Courtesy Image/Carol Peacock) 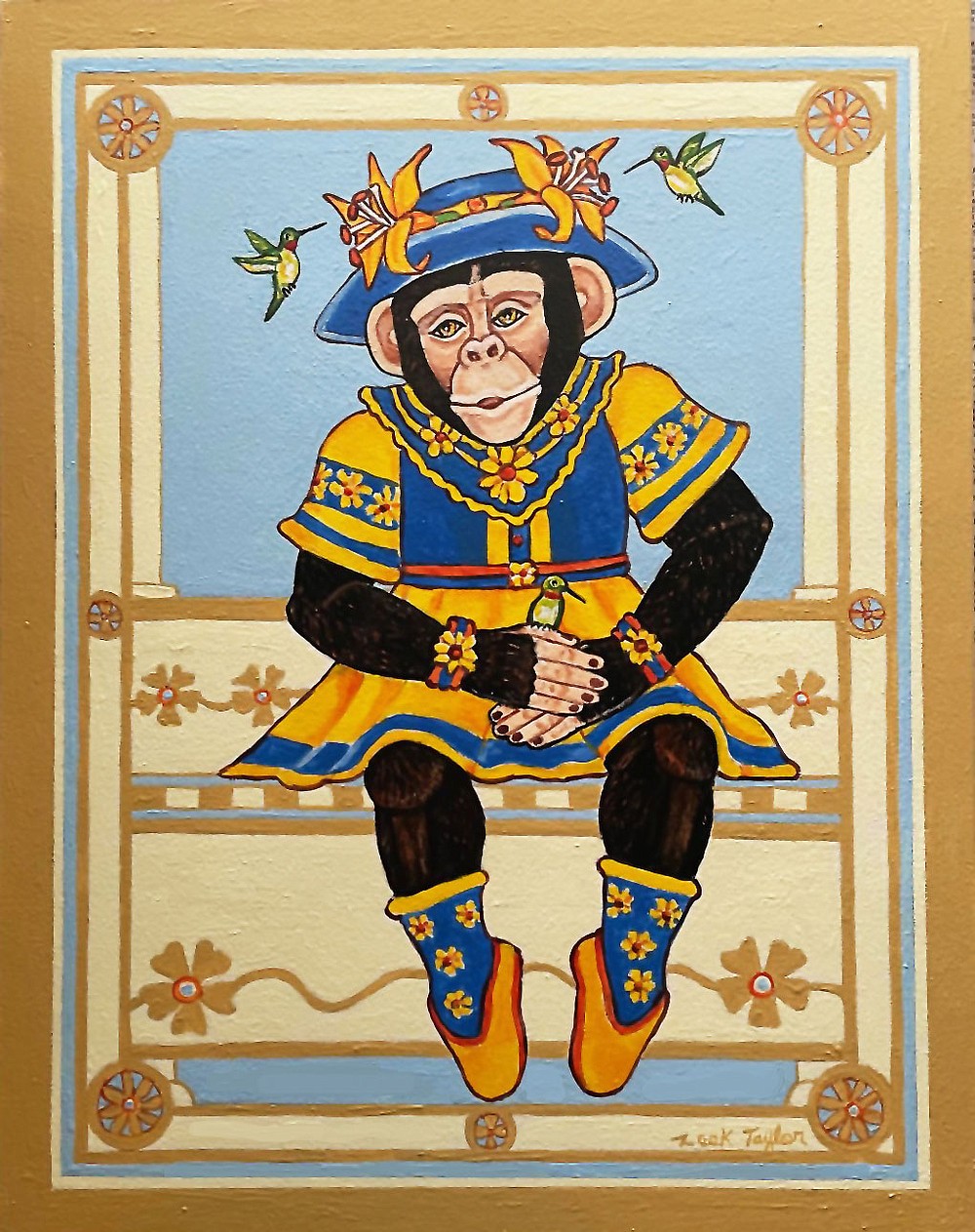 “Lillian Fife” was created by artist Zeek Taylor especially for the “Flower Power” art show at Brews. “I enjoy themed exhibitions and the challenge of rendering a chimp in a specified setting, one that I possibly hadn’t considered. Adorning Lillian with flowers was fun. Where there are flowers, there are hummingbirds, and I added the little birds to the piece,” he says. (Courtesy Image/Zeek Taylor) 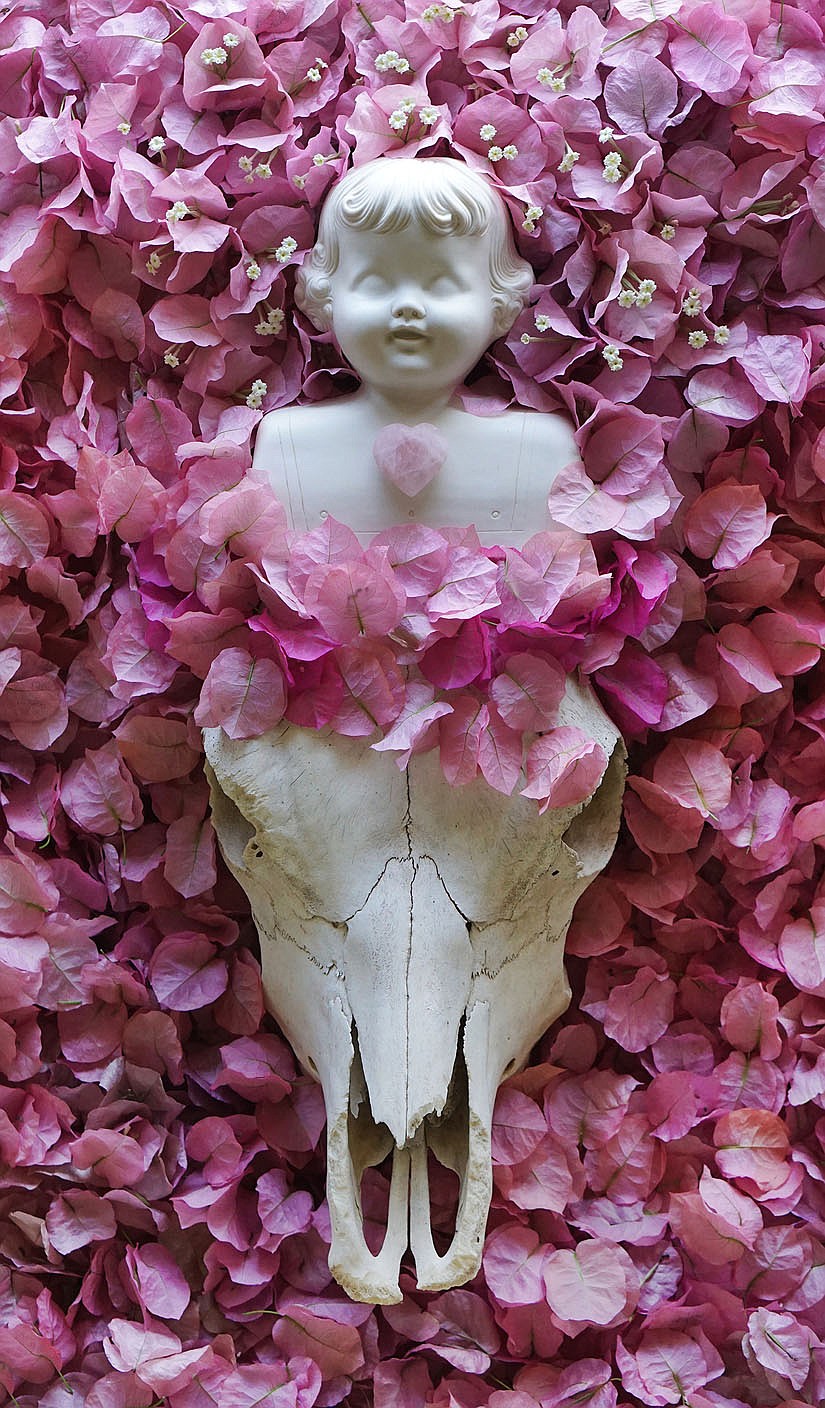 “Blind Faith” by John Rankine is an archival inkjet photograph of one of his found-object sculptures. It brings together a doll mold, a cow skull and bougainvillea and is inspired by artist Georgia O’Keeffe. It is on show now at Brews in Eureka Springs. (Courtesy Image/John Rankine) 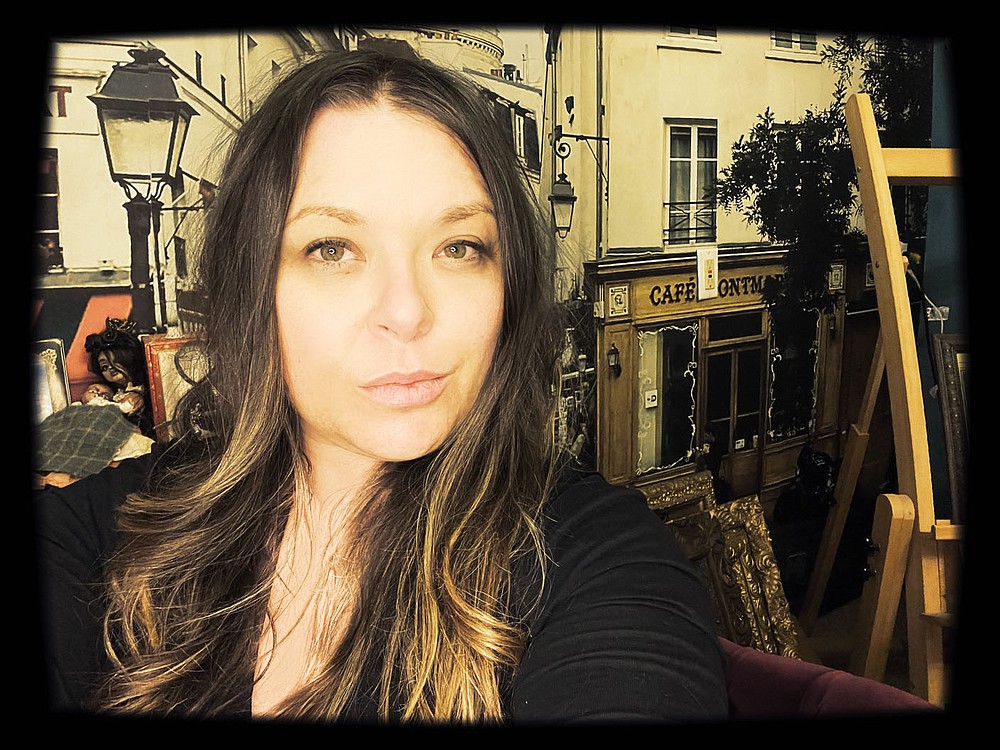 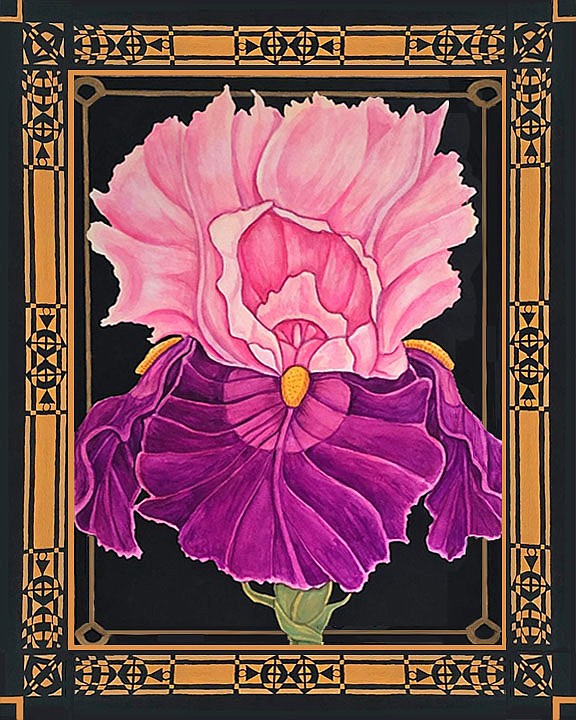 “Glowing” by Zeek Taylor is, he says, one of a long series of iris paintings that he has done. “I never get tired of painting irises, and the Brews exhibition is the perfect springtime show.” (Courtesy Image/Zeek Taylor) 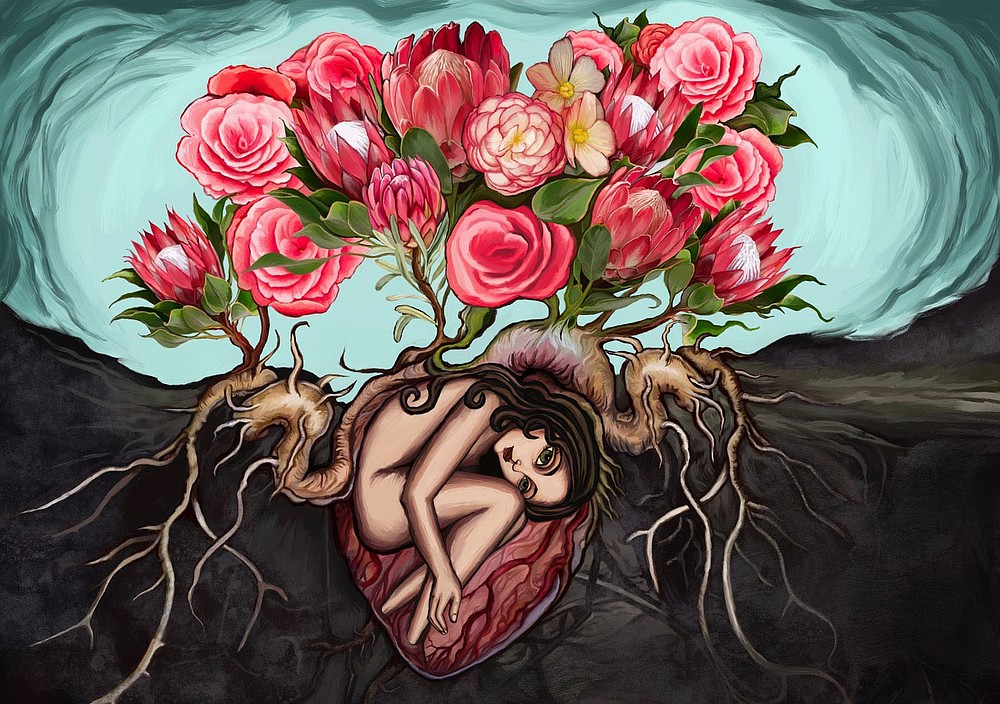 A digital painting by Jana Robison, “We Were Seeds” was inspired by the quote “They tried to bury us, but they didn’t know we were seeds,” by the Greek poet Dinos Christianopoulos. It is part of the “Flower Power” exhibition at Brews. (Courtesy Image/Jana Robison)
More News

COST — Admission is free; works are for sale