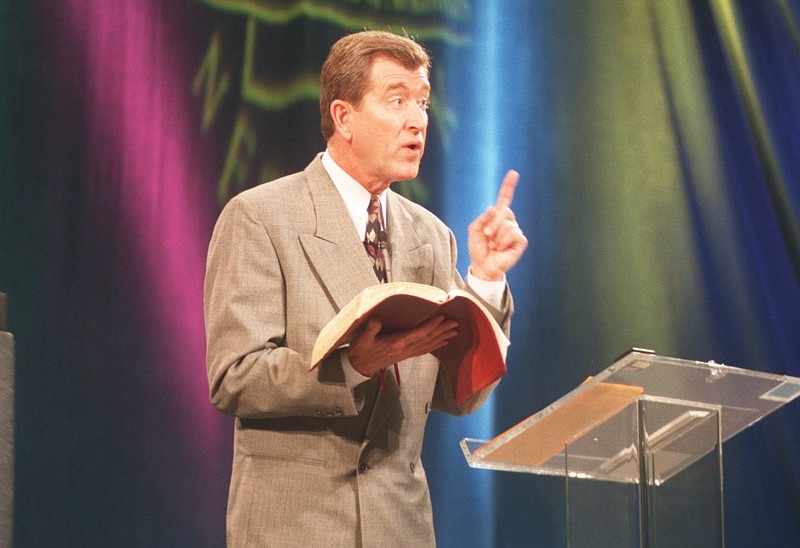 Happy Caldwell, founder of Victory Television Network, reads a passage from the Bible during a network telethon in this April 1998 file photo. (Arkansas Democrat-Gazette file photo)

A retired pastor invited to the House on Thursday to lead all 100 members in an opening prayer used the opportunity to thank lawmakers for passing legislation further restricting abortions, upsetting some Democrats who opposed those bills.

"I would just like to say thank you for the pro-life legislation that's come out of this state," said Happy Caldwell, the retired pastor of Agape Church in Little Rock, after reading a portion of scripture. "Arkansas has set a leadership pace for the rest of the nation to follow."

The House begins its floor sessions every day with an opening prayer, which is usually delivered by the House chaplain, Dr. Rex Horne. Occasionally, guest chaplains are invited from around the state to deliver the opening prayer.

House Minority Leader Tippi McCullough, D-Little Rock, said after the floor session Thursday that it was inappropriate for Caldwell to bring political issues into the prayer, noting that the membership of the House comes from different backgrounds, religions and denominations.

[RELATED: See complete Democrat-Gazette coverage of the Arkansas Legislature at arkansasonline.com/legislature]Democrats in the House have typically voted against measures restricting access to abortion.

Earlier this year, legislation outlawing all abortions except those performed to protect the life or health of the mother was passed by both Republican-majority chambers with the support of only one Democrat. The bill was signed into law by Gov. Asa Hutchinson.

"We try to keep away from specific issues," McCullough said of prayers delivered before the chamber. Three Democrats walked out of the chamber during the prayer, though McCullough said she did not know whether they were protesting the content.

One member who walked out, Rep. Vivian Flowers, D-Pine Bluff, said she was "offended and upset" by the prayer, which was delivered minutes before the House adopted a resolution calling for "civil discourse" and unity in the nation.

House Speaker Matthew Shepherd, R-El Dorado, said he was not in the chamber during the prayer and that he would review a recording as well as any guidance given to guest chaplains.

A spokeswoman for the House later said no guidance was given to Caldwell.

McCullough said she had spoken to Rep. John Eubanks, R-Paris, who presided over the chamber at the time, about her concerns.

"We will take a more proactive stance if it happens again," McCullough said.