In face of looming shortages, conservation steps to be key in negotiating accord by SOPHIA EPPOLITO AND FELICIA FONSECA THE ASSOCIATED PRESS | March 14, 2021 at 5:32 a.m. 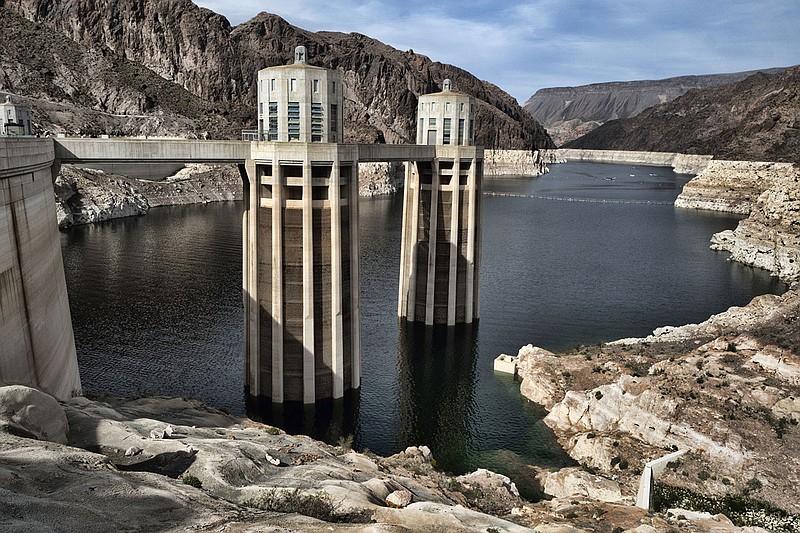 As seen from the Hoover Dam in Arizona in March 2019, a bathtub ring of light minerals shows the high water mark of the dam’s reservoir formed by the Colorado River. The river supplies Arizona, California, Colorado, Nevada, New Mexico, Utah, Wyoming and Mexico. (AP file photo)

SALT LAKE CITY -- As persistent drought and climate change threaten the Colorado River, several states that rely on the water acknowledge they likely won't get what they were promised a century ago.

Republican lawmakers approved an entity that could push for more of Utah's share of water as seven Western states prepare to negotiate how to sustain a river serving 40 million people. Critics say the legislation, which the governor still must sign, could strengthen Utah's effort to complete a billion-dollar pipeline from a dwindling reservoir that's a key indicator of the river's health.

Other states have had similar entities for decades, but Utah's timing raised questions about its commitment to conservation and finding a more equitable way of surviving with less.

"There's a massive disconnect all centered around climate change," said Zach Frankel, executive director of the Utah Rivers Council, which opposed the legislation. "The other six basin states know the Colorado River is dropping, and they know they have to decrease their usage, while Utah is running around in this fantasy."

The river supplies Arizona, California, Colorado, Nevada, New Mexico, Utah, Wyoming and Mexico as well as a $5 billion-a-year agricultural industry. As the states face a dire environmental future and negotiations over a new plan to protect the waterway from drought, it's forced a shift in thinking.

The goal of renegotiating is figuring out how to use less, "not staking out political turf to try to figure out how to use more," said John Fleck, director of University of New Mexico's Water Resources Program.

"It's just not clear Utah has a willingness to do that," he said.

The six members of the Colorado River Authority of Utah would oversee the state's negotiations on the drought plan and other rules that expire in 2026. Opponents worry parts of the legislation would allow the authority to avoid scrutiny by keeping some documents secret and permitting closed meetings.

House Speaker Brad Wilson said Utah will pursue conservation, but that alone won't meet the needs of one of the nation's fastest-growing states. Utah is entitled to the water under long-standing agreements among the states.

"We just need to make sure that as we kind of preserve and protect our interests in the Colorado River, that we have the expertise and the tools we need at our disposal to do that," Wilson said.

The bill was offered six months after the other states rebuked Utah's plan to build an underground pipeline that would transport billions of gallons of water 140 miles from Lake Powell to a region near St. George, Utah, close to the Arizona border.

Utah began pursuing the pipeline 15 years ago to serve the city that's had a 23% population jump since 2010, according to census figures, likely driven by a warm climate, red rock landscape and outdoor recreation. The project is under federal review.

Water experts worry Utah, which experienced its driest year ever in 2020, is banking on water that might not be available and could further deplete Lake Powell. Utah is one of the so-called upper basin states that get their share of water based on percentages of what's available but historically haven't used it all. The lower basin states -- Arizona, California and Nevada -- get specific amounts that are subject to cuts.

Utah plans to tap 400,000 acre-feet of water on top of the 1 million acre-feet it typically uses. An acre-foot is enough to serve one to two average households a year.

"Using more out of the Colorado River system might be on some piece of paper somewhere as a legal entitlement, but it is not a practical reality in the system that we've got today," said James Eklund, former director of the Upper Colorado River Commission, an interstate agency that helps states administer water rights.

With conservation in mind, states have passed laws focused on safeguarding other water supplies.

In Arizona, Gov. Doug Ducey recently signed a bill allowing farmers, ranchers and others to file a conservation plan and not lose their full water entitlements. Colorado and New Mexico also have eased up on "use it or lose it" laws.

The Arizona law doesn't affect the Colorado River but could boost water in other streams and rivers for wildlife habitat, recreation or city use.

"Everyone in the state needs to take a good, long look at the water that they're using and how much water they expect to use in the future and how to properly manage that so we can have long-term water security for everybody," said Kim Mitchell of Western Resource Advocates, which supported the Arizona bill.

Utah isn't alone in a history of lawsuits, disagreements and posturing to defend its share of water, though much of it recently has come from lower basin states that use most of their water.

The Imperial Irrigation District in Southern California, which holds the single largest share of Colorado River water, refused to join the drought plan without federal money to address a briny inland sea that's become a health hazard as evaporation leaves behind contaminated dust. The Salton Sea also will be a sticking point in renegotiations, the district said.

Southern Nevada has built a pipeline near the bottom of Lake Mead to ensure taps will keep flowing to Las Vegas homes and casinos even if the reservoir no longer can deliver water to Arizona, California and Mexico.

And American Indians want to ensure their voices aren't missing from talks as they say they have been in the past. The 29 tribes in the Colorado River basin collectively hold rights to about 20% of its flow.

"The days of tribes standing silently by as the federal government, states and other entities set the terms for managing and distributing water to which our people are entitled and depend upon for survival are over," Gila River Indian Community Gov. Stephen Roe Lewis said in a statement.

Information for this article was contributed by Sam Metz of The Associated Press. 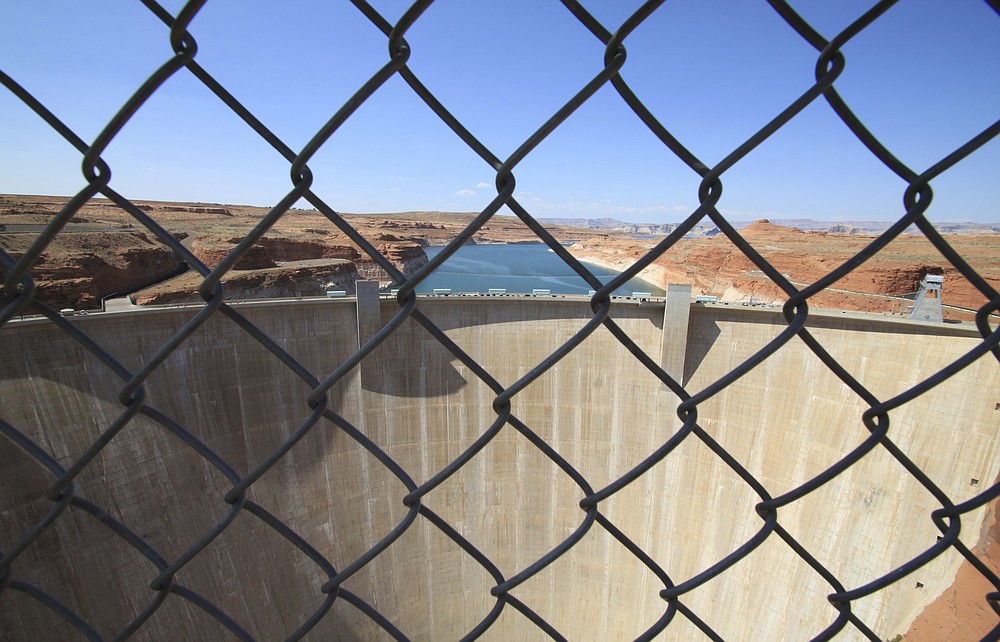 This Aug. 21, 2019 image shows Glen Canyon Dam beyond a chainlink fence near Page, Arizona. A plan by Utah could open the door to the state pursuing an expensive pipeline that critics say could further deplete the lake, which is a key indicator of the Colorado River's health. (AP Photo/Susan Montoya Bryan) 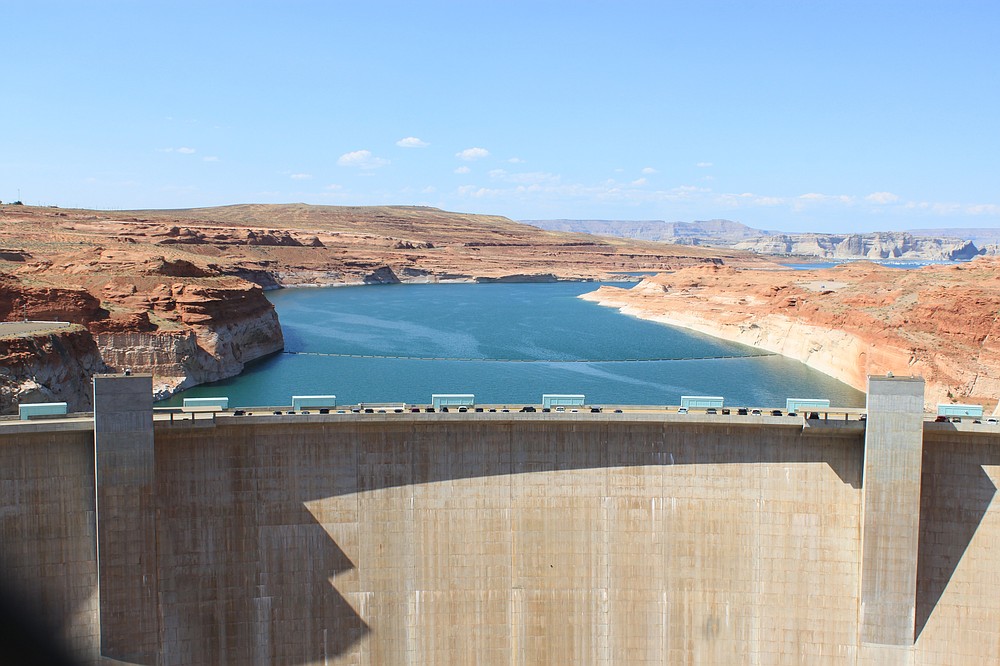 This Aug. 21, 2019 image shows Glen Canyon Dam near Page, Arizona, holding back Lake Powell. A plan by Utah could open the door to the state pursuing an expensive pipeline that critics say could further deplete the lake, which is a key indicator of the Colorado River's health. (AP Photo/Susan Montoya Bryan) 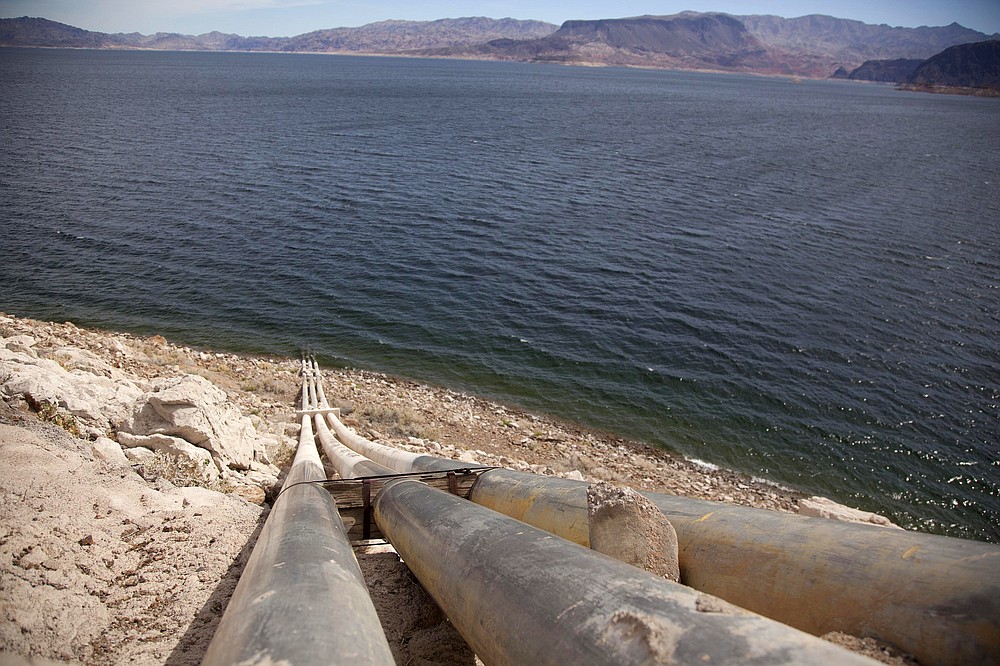 FILE - This March 23, 2012, file photo, shows pipes extending into Lake Mead well above the high water mark near Boulder City, Nev. A plan by Utah could open the door to the state pursuing an expensive pipeline that critics say could further deplete the lake, which is a key indicator of the Colorado River's health. (AP Photo/Julie Jacobson, File) 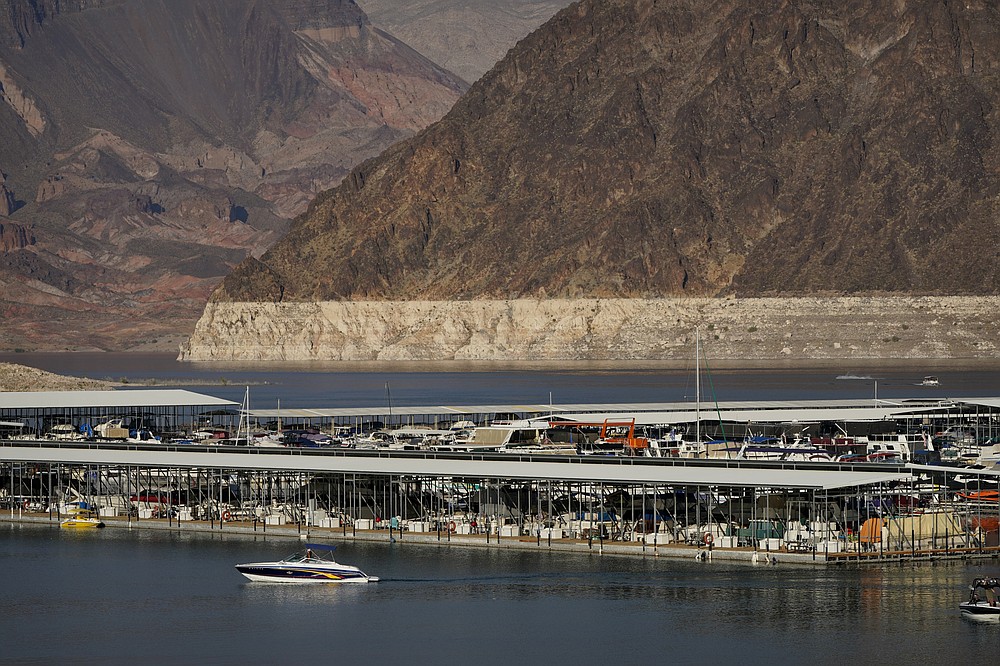 FILE - In this Aug. 13, 2020 file photo a bathtub ring of light minerals delineates the high water mark on Lake Mead at the Lake Mead National Recreation Area, near Boulder City, Nev. A plan by Utah could open the door to the state pursuing an expensive pipeline that critics say could further deplete the lake, which is a key indicator of the Colorado River's health. (AP Photo/John Locher, File) 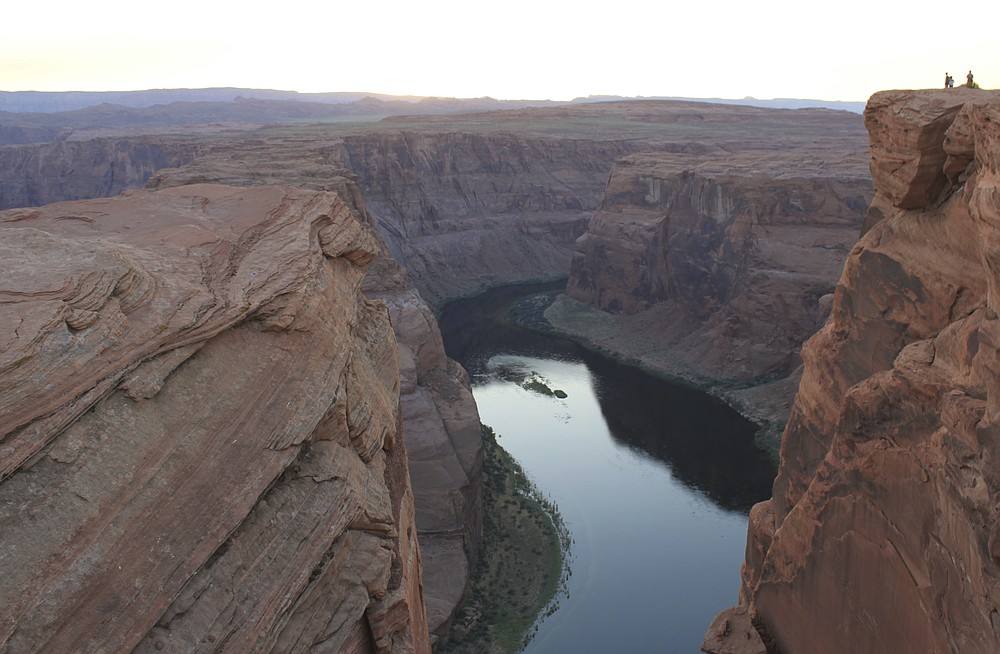 This Aug. 20, 2019 image shows the Colorado River flowing south of Page, Arizona. A plan by Utah could open the door to the state pursuing an expensive pipeline that critics say could further deplete Lake Powell, which is a key indicator of the Colorado River's health. (AP Photo/Susan Montoya Bryan)
ADVERTISEMENT