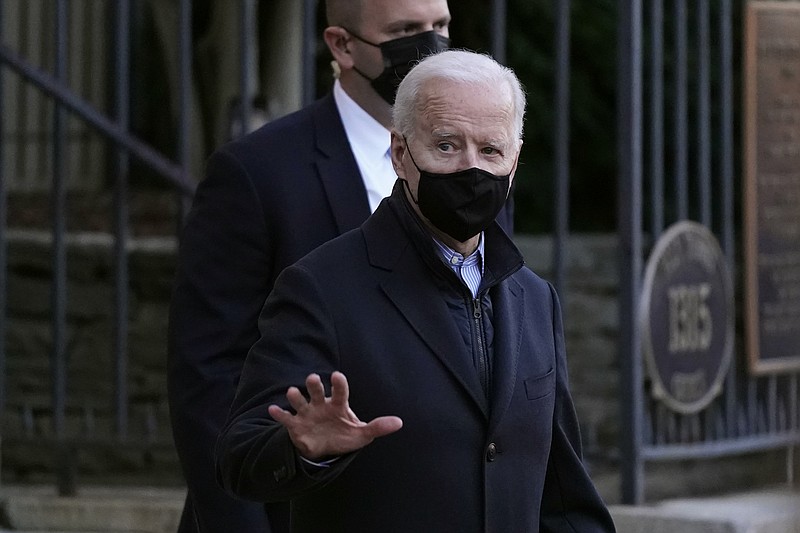 The order came on the 56th anniversary of "Bloody Sunday," when state troopers beat hundreds of marchers -- including John Lewis, the late civil-rights icon and Democratic congressman from Georgia -- on the Edmund Pettus Bridge in Selma, Ala.

"Today, on the anniversary of Bloody Sunday, I am signing an executive order to make it easier for eligible voters to register to vote and improve access to voting," Biden said in a videotaped address to the annual Martin and Coretta Scott King Unity Breakfast. "Every eligible voter should be able to vote and have that vote counted. If you have the best ideas, you have nothing to hide. Let the people vote."

Biden also paid tribute to Lewis and three other civil-rights giants: the Rev. C.T. Vivian, the Rev. Joseph Lowery and attorney Bruce Boynton. All played critical roles in the 1965 organizing efforts in Selma, and all died within the past year.

[Video not showing up above? Click here to watch » https://www.youtube.com/watch?v=os0HRIKrAL0]

The president's order directs federal agencies to develop a strategic plan for promoting voter registration and participation, including providing recommendations on leave for federal employees to vote or to serve as poll workers.

Some states have programs to automatically register eligible Americans to vote, unless they opt out, when they interact with motor vehicle departments or state agencies that administer federal efforts such as military recruitment, Medicaid and food stamps. Under the Trump administration, however, some federal agencies refused to share the data that would allow states to automatically register voters this way, citing concerns about the privacy of health data. Biden's executive order instructs federal agencies to relax that policy.

The order also aims to expand access to voting among active-duty members of the military as well as to all eligible federally incarcerated people.

And it establishes a steering group on American Indian voting rights, which is tasked with producing recommendations by next year on expanding voter outreach and turnout in those communities.

It also calls for modernization of the Vote.gov website.

The effect of the order will depend on how many Americans take advantage of new registration and voting opportunities that might result. A senior administration official said the effort represented the extent of what the president can accomplish unilaterally.

Biden's move came days after the House passed expansive legislation for creating uniform national voting standards, overhauling campaign finance laws and outlawing partisan redistricting. The measure, House Resolution 1, largely mirrors a bill passed by the chamber two years ago, but it has faced fierce Republican attacks that threaten to stop it in the Senate.

Democrats have also sought to restore elements of the Voting Rights Act. That follows the Supreme Court's move in 2013 to strike down a key provision requiring states and local governments with a history of discrimination to get preclearance from the federal government before enacting changes to voting procedures.

And this month, the high court heard arguments on another voting-rights case that could free state legislatures to make more changes to voting laws.

Biden on Sunday said he hopes the Senate passes the House legislation so he can sign it into law, and he called on Congress "to fully restore the Voting Rights Act."

While Democrats say the House legislation would help stifle voter suppression attempts, Republicans have cast it as unwanted federal interference in states' authority to conduct their own elections. Conservative groups have undertaken a $5 million campaign to try to persuade moderate Senate Democrats to oppose rule changes needed to pass the measure.

The bill's voting provisions would guarantee no-excuse mail voting and at least 15 days of early voting for federal elections; require states to use their government records to automatically register citizens to vote; restore voting rights to felons who have completed their prison sentences; and mandate the use of paper ballots.

During his remarks at the Conservative Political Action Conference last month, former President Donald Trump blasted the bill, accusing Democrats of wanting to register all welfare recipients to vote.

Trump said that "we need one election day, not 45," and he derided the "insanity" of mail-in voting.

"For all the complaints that you heard about the election in 2020, the complaint that no one said was, 'It was too difficult to vote,'" Ratcliffe said on Fox News. "And yet, what [House Speaker] Nancy Pelosi and President Biden say is, 'Well, we have got to remove obstacles from people voting,' when, in fact, that really was not a problem."

Dozens of Republican-controlled legislatures, meanwhile, are considering measures that would restrict voting options ahead of the 2022 midterms.

Some of the measures would restrict absentee balloting, while others would limit early voting and other aspects of election administration.

One bill in Georgia would block early voting on Sundays, which critics consider an attempt to thwart Souls to the Polls, the Democratic turnout effort focused on Black churchgoers on the final Sunday before an election.

In his remarks Sunday, Biden noted that in 2020, even with the obstacles presented by the coronavirus pandemic, "more Americans voted than ever before." There was also a sizable uptick in mail-in voting in response to the pandemic.

But Biden also warned that the country is witnessing a "never-before-seen effort to ignore, undermine and undo the will of the people." He cited both the Jan. 6 attack on the U.S. Capitol by a pro-Trump mob as well as the 250 bills introduced by lawmakers in 43 states this legislative session with the aim of making it more difficult to vote.

"We cannot let them succeed," he said.

Bloody Sunday proved to be a turning point in the civil-rights movement that led to passage of the Voting Rights Act of 1965. Many speakers at Sunday events emphasized the need for continued activism to protect voting access.

"Voter suppression is still alive and well," said U.S. Rep. Terri Sewell, a Democrat who represents the district that includes Selma. "It reminds us that progress is elusive and every generation must fight and fight again."

Sewell spoke during a video that featured comments about the anniversary from activists, mayors, members of Congress and others. Later, organizers played video footage of activists, many of whom had been part of the Bloody Sunday events in 1965, crossing the bridge once again. They wore masks and spread out as they walked.

The event typically draws thousands of people to Selma. However, most of the events were held virtually this year because of the pandemic.

The King Unity Breakfast was held as an outdoor, drive-in event, though it included some in-person speakers such as the Rev. Bernard LaFayette and the founders of the group Black Voters Matter. Cliff Albright, one of the group's founders, spoke about the continued need to fight for voter access.

Others spoke via video link or in recorded messages, like the president, who noted: "Those torches and burning crosses, the batons, tear gas, fire hoses, attack dogs, and unfair laws and trials could not stop progress."

Organizers acknowledged the civil-rights leaders Lewis, Vivian, Lowery and Boynton and planned to lay wreaths at the bridge in their honor.

The 1965 march across the Selma bridge was sparked by events in nearby Marion, where a Black man had been killed by a white Alabama state trooper during peaceful protests for voting rights.

Jimmie Lee Jackson, a 26-year-old church deacon, was shot while trying to protect his mother from being hurt and died eight days later. In response, activists in Marion and Selma gathered for a march on March 7, with a goal of reaching the state capital in Montgomery.

Information for this article was contributed by Felicia Sonmez, Amy Gardner and Mike DeBonis of The Washington Post; by Aamer Madhani and staff members of The Associated Press; and by Justin Sink of Bloomberg News (TNS). 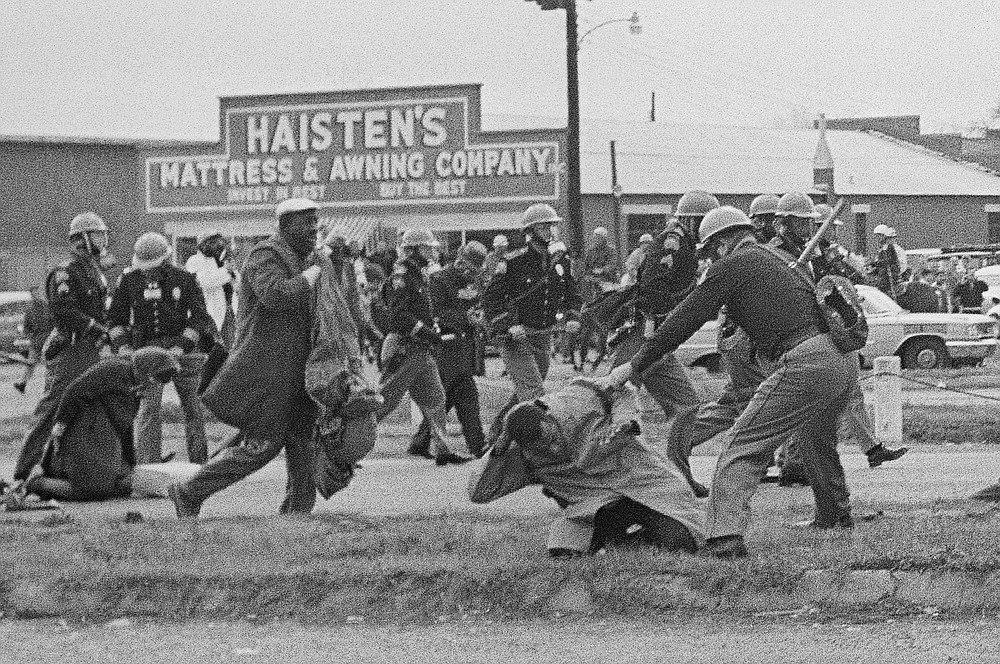 FILE - In this March 7, 1965, file photo, a state trooper swings a billy club at John Lewis, right foreground, chairman of the Student Nonviolent Coordinating Committee, to break up a civil rights voting march in Selma, Ala. The March 7, 2021, Selma Bridge Crossing Jubilee will be the first without the towering presence of Lewis, as well as the Rev. Joseph Lowery, the Rev. C.T. Vivian and attorney Bruce Boynton, who all died in 2020. (AP Photo/File)
ADVERTISEMENT