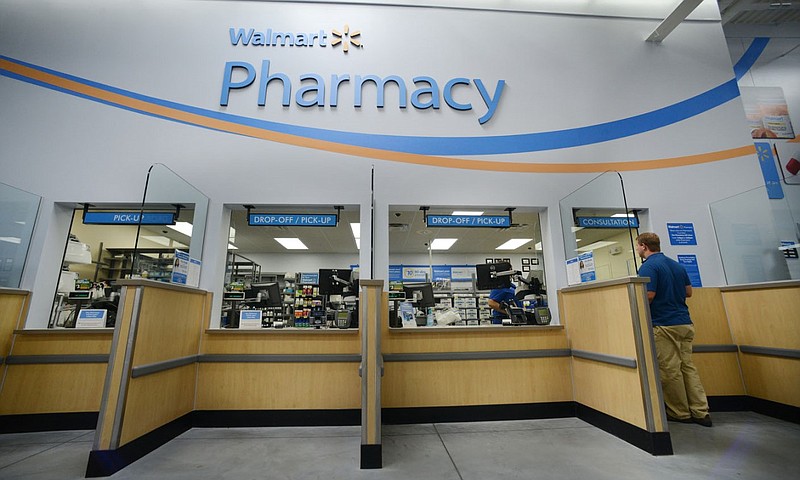 A Walmart pharmacy is shown in this undated Walmart Inc. courtesy photo.

Walmart Inc. has the backing of several business groups in a federal lawsuit that claims the retailer's pharmacies violated the Controlled Substances Act in dispensing opioid medications.

U.S. District Judge Colm Connolly granted a request Thursday by the National Retail Federation, the Washington Legal Foundation and the Chamber of Commerce of the United States of America to file a brief in support of Walmart's motion to dismiss the case.

The Justice Department filed the suit against Walmart on Dec. 22 in U.S. District Court for the District of Delaware. It claims that Walmart filled large numbers of invalid opioid prescriptions through its pharmacies, among other violations of the Controlled Substances Act.

The Bentonville retailer has more than 5,000 pharmacies in its stores and clubs nationwide.

Court records describe the National Retail Federation as the world's largest trade association, representing retailers from the U.S. and more than 45 countries. The federation submits supporting briefs "in cases raising significant legal issues for the retail community," according to the documents.

The Chamber of Commerce of the United States is the world's largest business federation. Its function includes representing the interests of more than 3 million businesses and professional organizations "in matters before Congress, the Executive Branch, and the courts," according to the filings.

The Washington Legal Foundation is described in the court documents as a nonprofit, public-interest law firm and policy center.

These organizations said in their brief that the Justice Department is wrong to hold a company responsible for its employees "filling allegedly improper prescriptions without any allegation that the employees who filled the prescription possessed knowledge of irregularities in the prescriptions."

This approach, the brief states, means a company can be found to "knowingly" violate a regulation if one employee reports information to a compliance department and another employee, no matter how distant, fills a prescription while unaware of the report.

"If [Justice Department] uses a company's own findings as if they are part of an interconnected 'hive' mind," it will have "deeply troubling, far-reaching effects," according to the brief.

Walmart filed a suit on Oct. 22 against the Justice Department and the Drug Enforcement Administration seeking to resolve inconsistencies in the agencies' rules and their enforcement under the Controlled Substances Act.

That suit was filed in the U.S. District Court for the Eastern District of Texas.

Federal Judge Sean Jordan dismissed the suit on Feb. 4, ruling that the defendants had not waived "sovereign immunity" in the case. Sovereign immunity means the government cannot be sued without its consent, according to Cornell Law School's Legal Information Institute.

Walmart said the next day that it would appeal. The judge's decision "is purely procedural, based on when the federal government can be sued, and does not resolve the public health concerns raised on our case," the company said.

Walmart's suit was filed preemptively in response to the Justice Department's threat to sue the retailer for "continuing to fill opioid prescriptions of certain licensed doctors -- many of whom are still authorized by DEA to prescribe opioids to this day," the retailer said in court documents.

"When a patient presents a pharmacist with an opioid prescription written by a doctor who is licensed by a state medical board and credentialed by DEA to prescribe controlled substances, the pharmacist must make a difficult decision," according to Walmart's complaint.

"The pharmacist can accept the doctor's medical judgment and fill the opioid prescription, or second-guess the doctor's judgment and refuse to fill it -- a decision the pharmacist must make without the benefit of a medical license, examining the patient, or having access to medical records," the company said in court records.