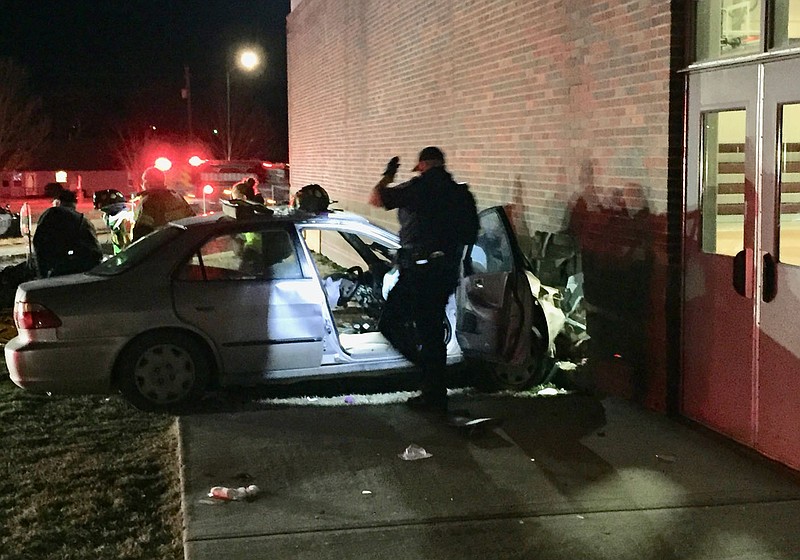 Photo by Graham Thomas Emergency personnel work at the scene of a motor vehicle accident at Siloam Springs Intermediate School. The vehicle crashed into the building near to the site of a previous accident in which a motorist crashed into the school building.

SILOAM SPRINGS -- One of the three people involved in the vehicle crash at the Siloam Springs Intermediate School on Sunday evening has died.

The crash occurred when a 1999 Honda Accord driven by Tyler Matthews, 32, was traveling west on West Cheri Whitlock Parkway, left the road, crossed the lawn and struck the east side of the school gym, Spicer said.

He estimated the vehicle was speeding at 70 to 80 mph.

Wiggins was riding in the front seat of the car and Desa Watkins, 18, was also a passenger of the vehicle, he said.

Spicer said he was checking on the other two people's condition Wednesday morning.

This is the second time in less than two months the east wall of the school gym has been hit by a vehicle.

A pickup driven by Ezequiel Gomez, 24, hit the school during the early hours of Jan. 5, Spicer said. It was also traveling west on West Cheri Whitlock Parkway when the driver lost control of the vehicle, jumped the curb on the south side of the road, then came back across the north side of the road and went through the ditch before hitting the wall of the building.

The driver left the vehicle and police believe Gomez was picked up by another vehicle, Spicer said in January.

On Sunday, the car appeared to hit the building about 40 feet north of where the first vehicle hit the gym in January, according to Superintendent Jody Wiggins, who is no relation to Natalia Wiggins. This time the car didn't hit a ditch or fire hydrant to slow them down and appeared to do a lot more damage, he said.

Engineers inspected the building Monday and again Tuesday morning after some block had been removed to expose a beam and found the building to be structurally sound, according to Assistant Superintendent Shane Patrick.

Workers were in the process of building a construction wall along the east side of the school gym on Tuesday, and Patrick said he was hopeful students could use the gym again by Thursday. The facility is used for physical education and socially distanced band classes, he said.

"We have been very careful to make sure the building is safe for students and staff," Patrick said. "We want to get them back in there as soon as possible, but safety is the first priority."

Contractors had just finished putting a coat of paint on the inside wall repair from the previous accident, Wiggins said. There was still some work to be completed on the outside, but the inside work was finished.

The second accident was far enough away from the first that it didn't damage any of the repairs that were already made, Patrick said.

Wiggins guessed the school had been in place for the past 20 years and the road has been there for a number of years as well, he said.

"We've never had an issue before the past two months," he said.

The district plans to put some kind of a barrier between the school and road to protect the school from being hit again, but Wiggins said he doesn't know what that will look like yet.