Jobless filings up despite virus strides 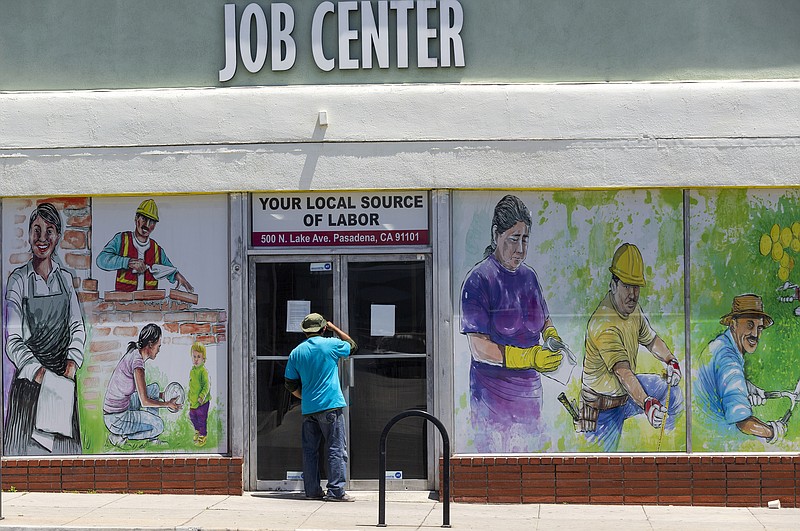 FILE - In this May 7, 2020, file photo, a person looks inside the closed doors of the Pasadena Community Job Center in Pasadena, Calif., during the coronavirus outbreak. A state report released Tuesday, March 2, 2021, details the pandemic's toll on California workers and shines light on who was most affected by job losses and layoffs. (AP Photo/Damian Dovarganes, File)

WASHINGTON -- The number of Americans applying for unemployment benefits edged higher last week to 745,000, a sign that many employers continue to cut jobs despite a drop in confirmed viral infections and evidence that the overall economy is improving.

Thursday's report from the Labor Department showed that jobless claims rose by 9,000 from the previous week. Though the pace of layoffs has eased since the year began, they remain high by historical standards. Before the virus flattened the U.S. economy a year ago, applications for unemployment aid had never topped 700,000 in any week, even during the 2008-2009 recession.

All told, 4.3 million Americans are receiving traditional state unemployment benefits. Counting supplemental federal unemployment programs that were established to soften the economic damage from the virus, an estimated 18 million people are collecting some form of jobless aid.

The figures were announced a day before the government's monthly jobs report. The median forecast of economists in a Bloomberg survey calls for a 198,000 increase in payrolls and for the unemployment rate to hold at 6.3%.

Jobless claims rose by more than 17,000 in Ohio, where the weekly totals have been thrown off by potentially fraudulent claims.

In Texas, applications for jobless benefits surged in the aftermath of freezing weather and power failures. First-time applications rose almost 17,800 from the week before, the biggest increase among all states and territories. Jobless workers may have delayed or been unable to file benefit applications during severe winter weather in the previous week, leading to a catch-up surge in this week's report.

"We knew there was some backlog in Texas and claims would likely go back up," said Gregory Daco, chief U.S. economist at forecasting firm Oxford Economics. "Despite expectations for record-breaking growth in 2021, the job market is still quite fragile."

Continued weekly claims for the federal pandemic program that extends the duration of unemployment benefits, known as Pandemic Emergency Unemployment Compensation, fell by more than 600,000 to 4.47 million in the week that ended Feb. 13.

Applications for Pandemic Unemployment Assistance, the federal program that provides unemployment benefits to those not traditionally eligible like self-employed and gig workers, increased slightly last week to 436,696 on an unadjusted basis.

Restrictions on businesses and the reluctance of many Americans to shop, travel, dine out or attend mass events have weighed persistently on the job market. Job growth averaged a meager 29,000 a month from November through January, and the nation still has nearly 10 million fewer jobs than it did in February 2020. Though the unemployment rate was 6.3% in January, a broader measure that includes people who have given up on their job searches is closer to 10%.

"Hundreds of thousands of Americans are continuing to struggle in this economy," White House press secretary Jen Psaki told reporters Thursday. "We can't get numb to what this represents. These are moms and dads, friends and neighbors, who will now have to worry about how they'll support families, put food on the table and make ends meet in the midst of the pandemic."

The data firm Womply reports that 64% of movie theaters and other entertainment venues, 40% of bars and 34% of hair salons and beauty shops are closed.

"The source of all labor market damage continues to be covid-19," said AnnElizabeth Konkel, economist at the Indeed Hiring Lab. "Increased vaccine distribution is promising, since the public health situation must improve for there to be a full economic recovery. When we completely return to 'normal' is still unknown."

Optimism is rising that increasing vaccinations and the new federal rescue aid package that likely will be enacted soon will spur growth and hiring in the coming months. Many analysts foresee the economy expanding at an annual rate of at least 5% in the current quarter and 7% for all of 2021.

Already, crucial sectors of the economy are showing signs of picking up as vaccinations increase, federal aid spreads through the economy and the Fed's low-rate policies fuel borrowing and spending. Last month, America's consumers bounced back from months of retrenchment to step up their spending by 2.4% -- the sharpest increase in seven months and a sign that the economy may be poised to sustain a recovery.

The solid gain suggested that many people were growing more confident about spending, especially after receiving $600 checks that went to most adults early this year in a federal economic aid package.

At the same time, rising bond yields in the financial markets are pointing to worries that higher inflation could be on the way as the economy recovers.

Information for this article was contributed by Paul Wiseman of The Associated Press; by Reade Pickert of Bloomberg News (TNS); and by Nelson D. Schwartz of The New York Times.