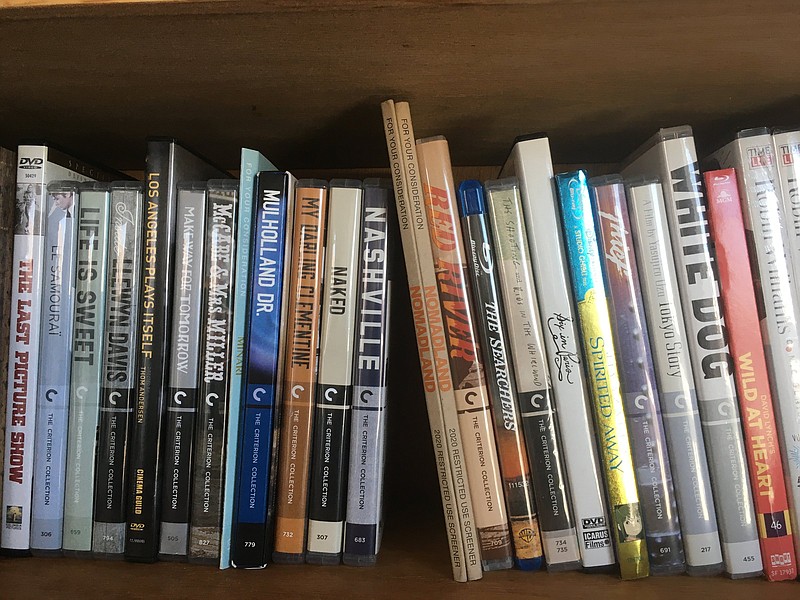 Some people still retain a soft spot for physical media. This is a section of the author’s remaining DVD collection.

There's no OnFilm video this week because I look terrible.

I am perfectly fine, but I wrecked my bike and landed on my face. That cost me about seven hours of working time, but otherwise I'm all stitched up and feeling just a little sore. But though Karen says my black eye looks kind of cool, I'm not doing a video. I will take a week off and hope for better luck tomorrow.

I was planning on talking about home video in this week's video, but I guess I can cover what I want to say about it here. I don't exactly know how long our "Home Movies" column has been a part of this section, but it has been around at least 15 years. And it is going to stay around, though like everything else that survives, it's going to change a little.

My wife, Karen, who started this section more than 20 years ago, also initiated the "Home Movies" as a way to acknowledge that, in the 21st century, most of us watched far more movies in our living rooms than we did in theaters. DVDs were ascendant, and they promised to be the lingua franca of the home video industry for some time. (Does anyone seriously argue for the superiority of videocassette tapes over Blu-ray the way vinyl record enthusiasts argue their analog media over digital product?)

Until the '70s, the only people who could have home film libraries were those people with access to actual reels of film. I'm sure more than a few people did have projectors and rooms racked with canisters of film, but I'd peg the home video movement as really beginning in the early to mid-1980s. In those pre-"on demand" days, you could set your VCR to record a movie off of HBO or the Playboy Channel (which, in the early '80s was a good source of European art films -- I remember recording Marco Ferreri's "La Grande Bouffe" (1973), Jean Renoir's "La Grande Illusion" (1937) and David Cronenberg's "Videodrome" (1983) off of Playboy; these films were the building blocks of my early film collection.

VHS tapes had a good run -- it wasn't until after the the turn of the 21st century that they were supplanted by DVDs. (I never bothered with LaserDisc format, though I know people who had marvelous collections. One of my signal movie-watching events was watching "Apocalypse Now" on LaserDisc in the home theater of a Hollywood screenwriter in 1991. It was impressive. I also remember thinking that his system cost more than any house I could afford in those days.)

Home Movies -- the column -- was all about DVDs.

It basically was designed to let consumers know that these select titles were being released on DVD (and/or Blu-ray) this week. You could buy them, or order them from Netflix. (Remember when Netflix was a mail-order shop?) It wasn't about movies that were showing up on cable services or digital vendors, it wasn't about streaming movies, it was just about the little shimmy discs that a lot of people bought, collected and rented.

Because that was a thing people did, a few years ago, before we got pandemic-ed.

Now a lot of people don't even understand the point of having a film library or a movie collection. Because everything is out there in the ether all the time and you can call it down with a few clicks. And I understand that state of mind, I really do. When we moved into a slightly smaller house a few years ago, we got rid of 90% of our DVD collection. (I hold onto a few hundred titles now because I use them in classes, and because I'm a pack rat who gets some satisfaction from having a bunch of DVDs on hand.)

But most of the DVDs that cross mine or Karen's desk these days don't stay very long. I give them away, if that's allowed (review screeners get destroyed). Sometimes if there's a digital download included in the package, I'll save a copy to one of our (several) virtual libraries. But just like the industry, I've evolved over the years. I can stream a film with the best of them.

So, in light of the changing environment, Home Movies is changing too. It will, Karen tells me, be more about Video on Demand openings. She'll spotlight Netflix, Amazon Prime, Hulu and other streaming service offerings. It probably won't be so tied to premiere dates.

And, she'll let you know where you can find them.

I imagine we'll still cover DVDs -- mainly through our occasional "Flashback" feature, but in this space too. I've got a couple I want to write about myself, once I get over the cervical sprain.