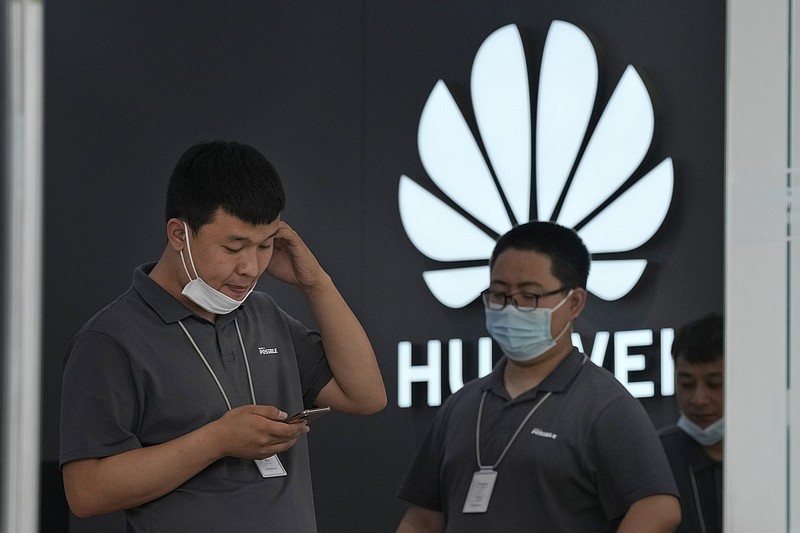 Huawei store workers wait for customers in Beijing in this fi le photo. The FCC has proposed a ban on products from Huawei Technologies Co. (AP)

U.S. regulators proposed a ban on products from Huawei Technologies Co. and four other Chinese electronics companies, including surveillance cameras widely used by schools but linked to oppression in western China, stepping up pressure on tech suppliers alleged to be security risks.

The order would forbid U.S. sales of specified telecommunications and surveillance equipment from the companies. The action begins a period of review before a final vote on the matter.

In the proposal, the FCC said it also may revoke its previous authorization for equipment from the companies, a step that could force schools and other U.S. customers to replace the camera systems.

Hikvision and Dahua have been accused by U.S. officials of involvement in China's crackdown in far western Xinjiang, where as many as a million Uyghur Muslims have been placed in mass detention camps. China has repeatedly denied any accusations of human rights abuses against its Uyghur minority.

The FCC action represents another step after "years of Huawei warnings," said Derek Scissors, a resident scholar at the American Enterprise Institute whose focus includes U.S. economic relations with Asia. "Any recent purchasers of Chinese telecom equipment who have been expecting years of use and now must exchange equipment should have known better."

In its draft order, the FCC didn't say how quickly affected gear would need to be removed, and it asked for comments on the "appropriate and reasonable transition period."

The FCC, Congress and the White House have pushed to ensure Huawei and ZTE gear isn't used in U.S. networks, citing risks of cyber-espionage that the companies deny. In 2018 Congress voted to stop federal agencies from buying gear from the five companies now subject to FCC pressure. Last year the agency put the companies on a list of providers whose products are deemed a national security threat.

Huawei, which markets phones in the U.S., said in a statement that the proposed FCC steps were "misguided and unnecessarily punitive."

Hikvision in an email said its designation as a threat isn't substantiated, and it "strongly opposes" the FCC measure. Dahua said it "does not and never has represented any type of threat to U.S. national security." It called the FCC's proceeding "unwarranted."

Hytera said its products "don't impose any threats to any country's national security," and called the FCC's approach inconsistent with the U.S. government's standard practice for evaluating and mitigating risk.