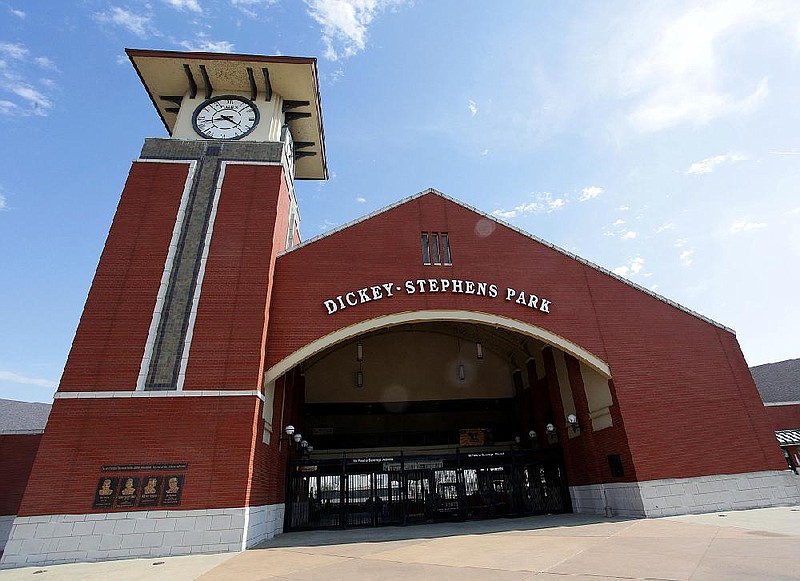 Dickey-Stephens Park in North Little Rock will welcome fans on Thursday as the Arkansas Travelers open the 2017 season.

It was a reset -- and a much-needed one at that.

After bouncing between Class AA and Class AAA for the St. Louis Cardinals in 2019, then being waived and claimed by the Seattle Mariners that December, O'Keefe spent the 2020 season in Tacoma at the parent club's alternate site before heading back to the East Coast.

It was also a chance for St. Joe's Coach Fritz Hamburg to spend time around his former standout. And Hamburg noticed a real change.

"The thing that I can say now is that [O'Keefe is] a man in the game," Hamburg said. "It's very different than when he was younger and he was a bit of a wild card. ... He's matured tremendously over the years."

That maturity has manifested itself behind the plate, with O'Keefe serving as the Travelers' everyday backstop and managing an impressive Arkansas bullpen. But it's also borne out in O'Keefe's work at the plate -- through Tuesday's night 3-2 10th-inning walk-off win against the Tulsa Drillers at Dickey-Stephens Park in North Little Rock, the 27-year-old is hitting a team-best .342 and leads the Travs with 10 homers and 26 RBI.

And while O'Keefe couldn't come up with the game-winner to lead off the bottom of the ninth inning, he added another hit with an early single -- his 17th in 35 at-bats this month -- and extended his hot streak with base knocks in 11 of his last 12 games.

"I never used to do that. It would be living and dying by the results, so I'd be constantly riding highs and lows."

There were seemingly always those lows.

In 2016, O'Keefe's first full minor-league season after the Cardinals drafted him in the seventh round of the 2014 MLB Draft, he hit .167 in eight games at High-A before being sent back down. O'Keefe stayed in Single-A the next two years and hit .262 and.243, respectively.

As a collegian, O'Keefe established himself as a strong defensive catcher. Hamburg challenged him to call games, and by the time O'Keefe turned pro, he was advanced behind the plate with a plus arm to boot.

But the hitting had to catch up.

While back in Philadelphia -- where O'Keefe typically spends his offseasons -- he went to the cages every day with Mariners hitting strategist Eddie Paparella. Together, they made an adjustment to O'Keefe's lower half, and it's been able to generate results that are both more effective and more consistent.

"In the beginning, it was really frustrating because I couldn't seem to get a grasp of it," O'Keefe said. "And then as time went, I started to realize I was feeling more comfortable, I was feeling better."

Perhaps in the past, O'Keefe might not have been capable of making those adjustments. But he acknowledged that the pandemic gave him a chance to reflect and become more comfortable with who he is -- both as a player and a person.

O'Keefe began to believe in who he was as well as in who he can still become.

"If you don't grow, you go," Travs hitting coach Joe Thurston said. "If you're stubborn or hard-headed and not thinking about what's going to make you better for more years, then it is hard [to change]. But O'Keefe understands that his goal is to be in the big leagues one day."

As close as O'Keefe was last year -- the Mariners' alternate site in Tacoma is less than 40 miles from T-Mobile Park in downtown Seattle -- he's still yet to reach Class AAA.

He hoped he would start this season in Tacoma and admits he was disappointed when the organization told him he'd be at Class AA yet again.

But O'Keefe is happy being present. And it helps that the results haven't been too shabby, either.