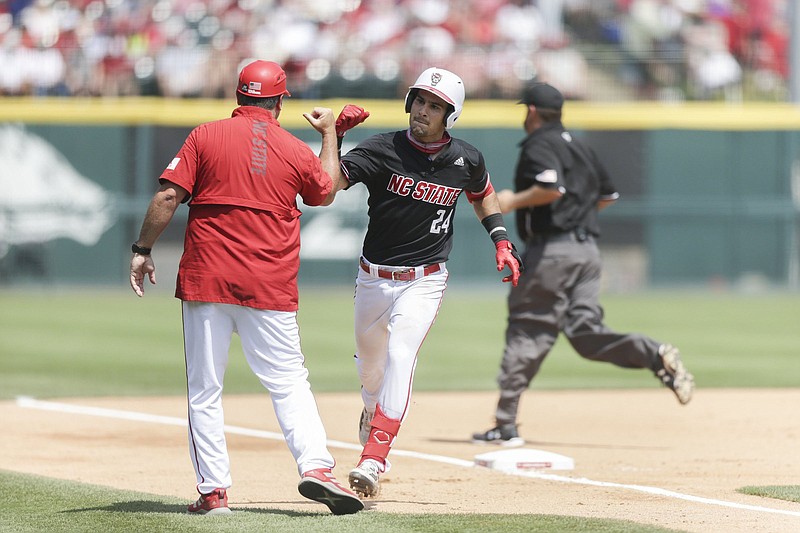 FAYETTEVILLE -- North Carolina State took it on the chin in Friday's super regional opener at No. 1 Arkansas, but Coach Elliott Avent's squad didn't let that 21-2 whipping get it down.

The Wolfpack rebounded Saturday and held off a late Razorback rally to score a 6-5 win and force a game 3 today at 5 p.m. at Baum-Walker Stadium.

"They've done this all year and nothing needed to be said," Avent said. "That's all you can do about that."

North Carolina State won for the eighth time in a row after a loss. The Wolfpack's last two-game losing streak came in back-to-back losses to Clemson on April 2-3.

"That's what I've told you all season," Avent said about his team bouncing back from losses. "This is the most impressive group I think I've ever had. When you use the word resilience and you use the word toughness, I instantly think of this team."

North Carolina State pitcher Sam Highfill, who picked up the win on Saturday, said the Wolfpack didn't beat themselves up over Friday's rout.

"[Friday] we weren't even down, and Coach said that we could either forget it and move on or we could dwell on it," Highfill said. "Coach said he's not going to dwell on it, and I think that is a big reason the way we came out today."

Arkansas has lost back-to-back games only twice all season, in consecutive losses at Louisiana Tech and to Oklahoma and Alabama between March 14-19.

The most likely starters, based on recent pitching plans, would be either right-hander Jaxon Wiggins (3-1, 5.09 ERA) or right-hander Zebulon Vermillion (3-0, 4.69), who was activated for the super regional after having some fluid on his pitching arm that kept him off the regional roster.

"We're not 100% sure yet," Van Horn said when asked about his pitching plans. "We'll figure that out here hopefully in a little bit."

North Carolina State is likely to go with right-hander Matt Willadsen (5-3, 4.97), who allowed 5 runs on 6 hits and 3 walks while pitching 6 innings and picking up the win in last Sunday's 14-7 win at No. 16 national seed Louisiana Tech in the championship round of the regional.

Charlie Welch has hit home runs in three consecutive games for the Razorbacks beginning with his pinch-hit, three-run home run in their 6-2 victory over Nebraska on Monday night.

As the starting designated hitter, Welch also has homered in each of Arkansas' two games against North Carolina State.

"Really just the pitchers making more mistakes and leaving stuff over the plate," Welch said. "I haven't really changed anything. Still trying to keep the same approach and hunt my pitches in certain counts.

"If they leave it over the plate, I feel like right now I can hit anybody. They just have to make a good pitch, and they haven't. So, I guess that's what has been going on."

Arkansas center fielder Christian Franklin, who missed Friday's game because of strep throat, got two at-bats Saturday when he played off the bench.

Coach Dave Van Horn said Franklin could be back in the starting lineup for tonight's game.

"I wouldn't count him out," Wolfpack Coach Elliott Avent said.

The streak survived through seven games of the NCAA Fayetteville Regional after Arkansas won its final five home games dating to a 7-3 loss to Georgia on May 8.

Arkansas will be the home team in today's finale based on being a national seed.

Kopps, who threw 185 pitches last weekend, will be available today in the winner-take-all game.

"I think Kevin will show us what he can do, what we need to do with him," Arkansas Coach Dave Van Horn said. "If he gets tired or whenever we pitch him, we'll go to the next guy. If we get to wait a little while, then we'll see if he can finish it.

"But yeah, he threw really well for two innings and we'll see how it goes [Sunday]."

No play at home

Arkansas was playing the infield up in the sixth inning when trailing 5-2 with North Carolina State runners on second and third against Connor Noland.

Instead, Battles made a clean, short-hop pick, eyed the play at the plate and fired to first base to record an out.

"He would have been safe," Van Horn said. "[Battles] was moving too far to his left. He would have had to throw it sidearm off-balance.

"They were running the contact play. It wasn't like he waited to see where it went. He was moving and shuffling, and when the ball was hit, he was gone. If it had been hit right at him, he would've been out by 10 feet, but it wasn't. It ended up being the winning run."

In the team chase, second baseman Robert Moore holds the team lead with 16 home runs after hitting two on Friday.

Arkansas' postseason batting average dropped 13 percentage points to .238 after the Razorbacks went 4 for 32 in Saturday's 6-5 loss.

After a walloping 17-for-41 performance in Friday's 21-2 win over North Carolina State, the Razorbacks pumped their postseason average up 29 percentage points, from .222 to .251.

Arkansas has six home runs and 12 extra-base hits against the Wolfpack this weekend.

Arkansas ace Patrick Wicklander improved his record to 7-1 and his ERA to 2.11 after Friday's 6-inning win over North Carolina State.

Wicklander pitched 6-plus innings for the fifth time in 13 starts and threw a career-high 99 pitches, the sixth time he has reached 90-plus pitches this season.

The National Weather Service issued a heat warning for Washington County around 1 p.m., an hour before first pitch.

The temperature was 92 degrees with a heat index of 101 degrees at first pitch.