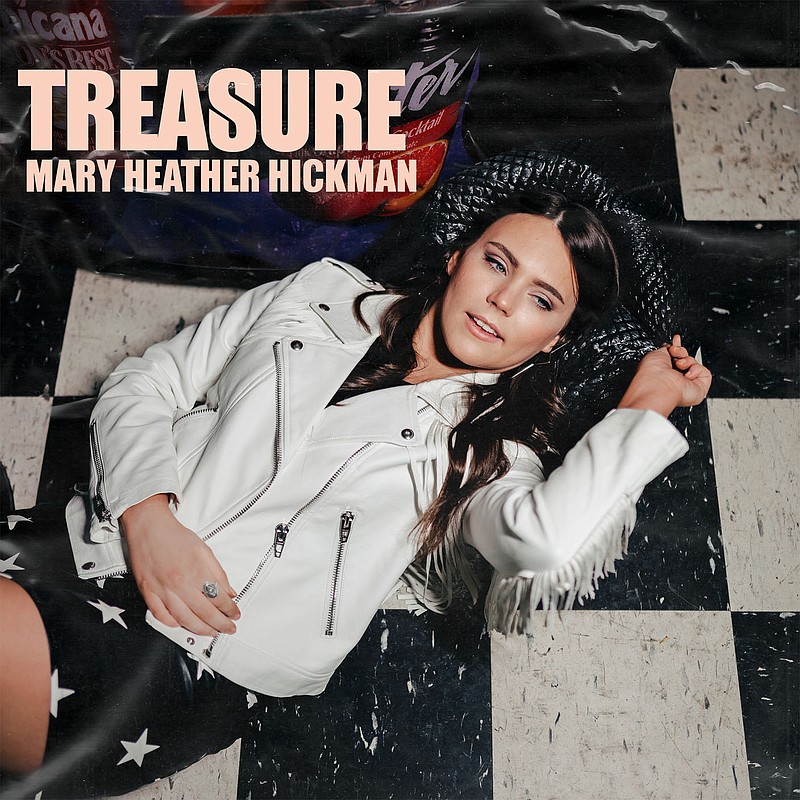 Mary Heather Hickman’s debut single “Treasure” boasts an all-star lineup of Arkansas talent. Northwest Arkansans will remember Hickman from her college days band, Mary Heather and the Sinners. For the single, she also worked with Springdale native and CMA Musician if the Year for 2020 and ‘21, fiddler Jenee Fleenor; and producer Tyler Bell, a staple in the area music scene of the ’90s with his duo Gypsy. The “Treasure” music video was recently shot, and Hickman and her production team are preparing a few more singles for release before her debut EP, likely coming next year. (Courtesy Photo)

The cheeky chorus of Mary Heather Hickman's debut single "Treasure" could seemingly be applied to her career as well as her dating life. Inspired by a checkered dating history -- "I'm just picking up trash and calling it treasure" -- Hickman's self-deprecating outlook on her past now finds the up-and-coming country singer/songwriter racking up "treasures" in the form of chart rankings, song streams and radio play.

"Obviously, there is a little bit of an exaggeration here. I would like to think maybe they're not that bad, the people that I pick," the University of Arkansas grad assures with a laugh. But the song did grow out of a margarita-fueled cabin getaway with friend and co-writer Stefanie Joyce.

What began as simple curiosity -- would Hickman get back into the dating scene soon, Joyce wondered -- soon devolved into the two writers trying to outdo each other with wild lines about "trash" men, all the while poking fun at Hickman's apparent attraction to them.

Hickman actually had no intention of releasing "Treasure" as her debut single, and, in fact, thought she might hold onto the song for a while, she reveals. But it was TikTok of all things that convinced her otherwise. After a bit of apprehension about the social media platform built for sharing short-form videos, Hickman decided to throw the song up after a particularly frustrating evening of trying to record on the app.

"I'm definitely a perfectionist when it comes to posting videos and things; I'm somebody that will record something 10 to 15 times to make sure I get everything as perfect as I can before I post it, which can be a flaw sometimes, for sure," she admits. After continuing to mess up a chord in the song she was actually trying to post, she decided to pull out "Treasure," something lighthearted and funny, and post the video just to have something to put up.

"I was like, 'I'm just going to record it one time and I'm not going to beat myself up over it, and I'm going to post it.' So I take this video of me singing 'Treasure,' sitting on the floor in my apartment. And there are some mess ups, not anything crazy. But it's funny that this is the video that kind of changed things."

The number of views on the video soared, getting tens of thousands in the first hour. That number is up to nearly 3 million and, following the full-length song's official release in February, has ultimately led to a spot on the "Women of iHeart Country" weekly playlist; hundreds of thousands of streams across Spotify and Apple Music; cracking the Top 40 on the Music Row Country Breakout Radio Chart; and peaking at No. 2 on the International HotDisc Top 40 chart out of the UK.

TikTok, she's found, is "a great way to get people interested in your music, find fans that maybe wouldn't have found your music," she says, noting newly gained fans as far away as Australia.

"The thing about TikTok is anybody has the potential to have a viral video," Hickman says with a hint of humble disbelief. "I think it's definitely changing a lot of things in the music industry, which is cool, too."