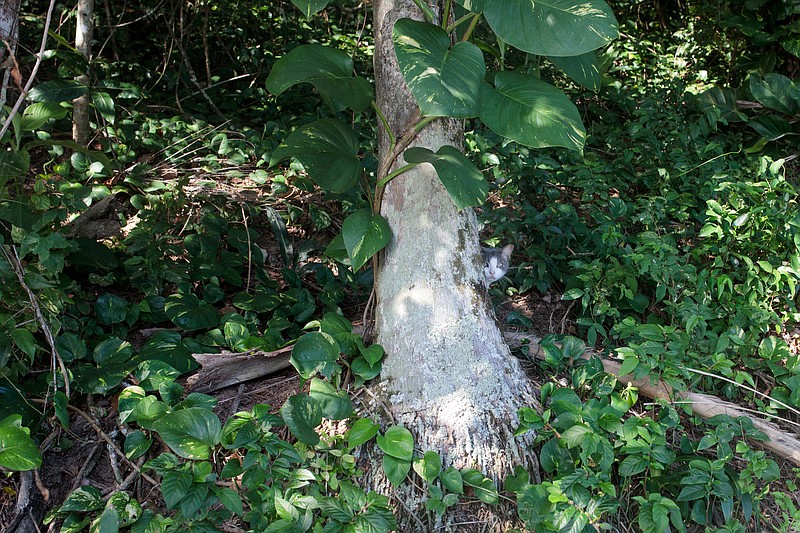 Brazil's Ilha Furtada, known as Ilha dos Gatos, has become part of some tourists' island loop - and now, an ecological problem as the number of cats has ballooned amid the pandemic. MUST CREDIT: Photo for The Washington Post by Patricia Monteiro

ILHA FURTADA, Brazil -- Eduardo Mayhe Ferreira has heard the stories for years. There was an island off Brazil's southeastern coastline that looked deserted but wasn't. Hidden within the dense tree cover were hundreds of abandoned animals.

Officially named Ilha Furtada, it was known to almost everyone as Ilha dos Gatos: Island of the Cats. It was rumored to be dangerous to visit.

The cats had grown to the size of dogs and gone feral, people said. They would attack outsiders.

One Brazilian reporter, writing of the "mysterious" island, claimed 750 "wild" cats roamed its jungle. Others said more. The number seemed to climb with every telling.

Now Mayhe, a municipal veterinarian in nearby Mangaratiba, was motorboating across translucent waters to see for himself. Before this city-backed expedition, he had never stepped onto the island but knew enough to understand there was a problem.

One rumor was true.

Over the past year, as the coronavirus pandemic devastated Brazil, the number of cats on the island had grown substantially. Two distinct colonies had formed. The cats were hundreds strong.

Each day seemed to bring more -- and greater damage to the island's ecosystem -- but less agreement over what to do about it.

The island was coming into focus, an emerald hubcap atop blue waters. Along this sun-soaked coastline, a global phenomenon is playing out.

These are the pets left behind by the pandemic. The coronavirus crisis has left millions of pet owners dead or impoverished, unable to tend to their animals.

In wealthy countries such as the United States, shelters and personal networks have absorbed much of the surge. But across the developing world, where shelter systems are less robust and street animals are common, a growing number of animals have simply been abandoned.

The challenge is particularly acute in Brazil, where the coronavirus has killed more than 465,000 people, ignited a housing crisis and caused widespread hunger.

Pet shelter managers in the country say they've been overwhelmed. That includes the shelter nearest the Island of the Cats. Some days, shelter director Andrea Rizzi Cafasso says, people arrive with a car full with cats. So many that she can't accept them all.

When she declines, she says, she gets the response, "If you don't take them, they're going out to Island of the Cats."

From a distance, Mayhe couldn't yet see the cats. He knew people all over the region had long sent unwanted felines to the island, either dropping them off themselves or paying a boatman a few bucks to make the trip.

It became part of the local culture, a last stop for unwanted cats, who either learned to survive from hunting and food left by visitors or perished.

What to do about them has divided the community.

The city wanted people to stop feeding the cats, saying it encourages further abandonment. But animal lovers called that barbaric. The cats would die without that care.

There's nothing on the island, they say. No food. No water. Just cats.

The boat docked, and here they came, loping out of the trees to cluster at the water's edge, all mangy fur and narrowed eyes.

No one can say for sure how the cats first arrived.

Officials in Mangaratiba say a family tried to make a life out there decades ago, but soon gave up, leaving behind a pair of cats that started multiplying.Boatmen say a restaurant closed down and the owners abandoned their cats on the way out.

A veterinarian says an old man confessed to her that he was the first person to take cats there. But when he was reached for comment, he vehemently denied it.

The unanswered questions have fed into the local lore. Few had wanted to visit Ilha Furtada, one small island among many, bereft of beaches and covered in spiders.

But Ilha dos Gatos was a whole other story. It became a stop for some tourists on their island loop. Some would ride water scooters to the island just to get a look.

Many came to believe that the island cats had it better than city cats, who had to scratch and claw out an existence on the streets.

"They have all they need out there," reasoned boatman Miguel Campos, 61. "There are birds to hunt and they have other food. There are seeds and insects and snakes they can eat."

But Amelia Oliveira, a veterinarian who travels Brazil caring for animals, says the myth is far removed from the reality.

In 2012, a friend sent her video from the island. It wasn't cat paradise. It was Cat Alcatraz.

There wasn't even a fresh water source out there.

"I couldn't leave the cats out there in such a situation," she said. "I agreed to go the same hour."

She found the island swarming with an unknown number of cats.

Some approached her, purring. Others were far gone -- totally feral. They had been born on the island, knew nothing of humankind and would be impossible to socialize.

She carried back some of the agreeable ones for adoption, and started capturing and neutering others. In the past decade, she said, 380 of the island's cats have been neutered by her organization, Veterinarians on the Road.

"The cat population was being controlled," Oliveira said.

Organizations and a retired couple left food and water for the cats. Others set up small shelters. Fishermen dropped off part of their catch.

But when the pandemic hit, the delicate balance came undone. The cats quickly grew in number. People, locked inside, stopped leaving food and water.

Reports of cat cannibalism started to circulate. What had began as a local oddity, even a tourist attraction, had become a public embarrassment and an ecological problem.

Something had to be done.

Some of the cats approached the visiting city workers, rubbing against their legs. Others paced the shoreline, back and forth, back and forth. More eyed the outsiders, warily, from a distance.

The colony had the appearance of a feline shantytown.

Cat-sized houses left by volunteers lay scattered about, alongside jugs to catch rain water and cat-food feeders in need of refilling. Brightly colored spiders, each the size of an infant's palm, clung to webs strung among the fixtures. The coastline was strewn with trash.

"Taking a cat out here is animal cruelty," Mayhe said.

But with the shelters full and many cats incapable of being socialized, taking them back to the mainland would be equally complicated.

Mangaratiba officials weren't sure they could carry out the plan they had conceived.

They had wanted to send expeditions to explore the island and perform a cat census. Then erect surveillance cameras to deter abandonment and prosecute offenders. Then begin neutering. And, finally, let nature take its course.

The docile cats would be adopted out. The others would live out their lives on the island, until there were none left.

The plan has been contentious. The city's public health secretary was opposed to feeding the island cats. That would encourage others to maroon their cats here.

Joice Puchalski, coordinator of a volunteer group that feeds the cats, was livid. The animals didn't ask to live on a deserted island.

She said vultures had been seen circling. How could people abandon them again? She posted a screenshot of Castelo Branco's comments on Facebook and let loose: "LAMENTABLE."

"How absurd," agreed one of the dozens of furious responses.

"The biggest sickness Ms. Secretary has is poverty of the spirit," said another.

But the officials, looking at the squalor of the cat dwellings, said the situation was more complicated than social media absolutism.

"It's terrible," said Fernanda Porto, the city's environmental sub-secretary. "Are we going to let the animals die of hunger or are we going to keep on giving food, which will only incentivize more abandonment?"

Many of the cats, seeing that the officials carried no food, grew tired of the visitors.

Some returned to the small shelters. Others disappeared into the trees. Mayhe peered into the forest. There was no telling how many were in there.

The city's reconnaissance had done little but confirm a lot of work was ahead.

Porto and the others climbed back into the boat. They started the engine and pushed out to sea. The cats receded in the distance, moving shadows on one small island among many.