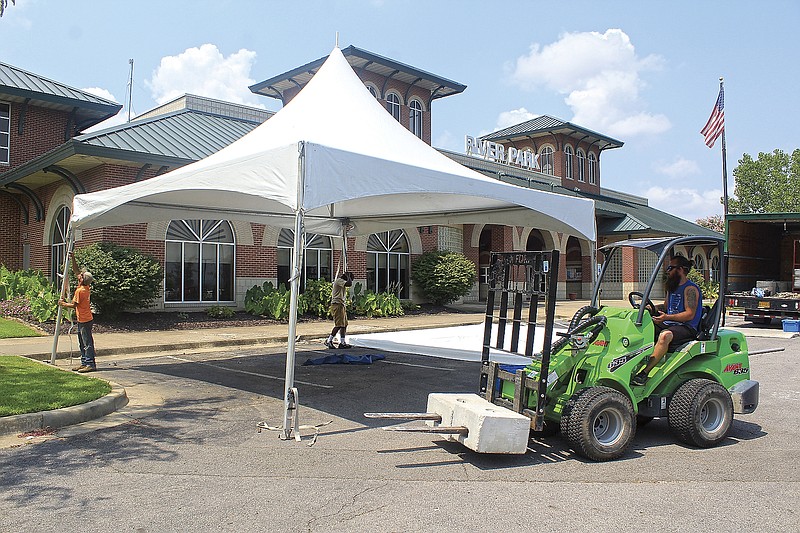 Matt Ludwick, from left, John Pettey and Josh Cobb set up a tent Wednesday, July 28, 2021, outside the Riverfront Amphitheater in Fort Smith in preparation for Peacemaker Festival. The festival will be held July 30-31 at the amphitheater and feature 10 musical acts including headliners Cody Johnson and Paul Cauthen. [Max Bryan/NWA Democrat-Gazette]

FORT SMITH -- Attendees at this weekend's Peacemaker Festival face the same covid risks as people at any other social gathering held at this time, according to an area health official.

Dr. Lee Johnson, a state representative and medical director of Fort Smith EMS, said vaccinated people at the festival will have more protection against the delta variant of the virus, as in other settings. He also said an outdoor festival concerns him less than an indoor event.

The annual country, red dirt and Americana music festival will be held today and Saturday at Harry E. Kelley Park on the Fort Smith riverfront. As of Tuesday, the event had sold more than 4,000 tickets for each night -- more than 80% of its nightly attendance cap, according to Trent Goins, festival president.

"You should be concerned, but not any more concerned because it's Peacemaker," Johnson said.

The festival was approved eight to 12 months in advance of its scheduled dates, Goins said.

Peacemaker will have a sign posted at the front gate warning festival-goers of the effects of covid-19, Goins said. Peacemaker staff members encourage attendees who want to wear masks to do so, he said.

Peacemaker organizers in 2020 held the event at 4,000 capacity, Goins said. It was 60% of the state's two-thirds capacity cap for outdoor venues at the time. Attendees were required to wear masks when outside of seating pods.

While the event was cited by Arkansas Alcohol Beverage Control for not following covid-19 protocols, the Arkansas Department of Health reported no new cases from it, Goins said.

"There's always a concern, but I do believe that with the organizers and their ability and what they did last year, they'll be able to do well this year that people are reminded that wearing masks is one very good way to make sure that you don't pass the virus and probably don't receive it, either," Geffken said.

Peacemaker in 2021 features headliners Cody Johnson and Paul Cauthen with support of eight other artists including Muscadine Bloodline, Kolby Cooper and Lucero.

"Cody Johnson, obviously, being the overall headliner for Saturday night will be a big boost, having an artist of Cody's caliber play our festival," Goins said. "But I will tell you Paul Cauthen was the direct support last year, and to be able to come back and headline the festival this year, Paul Cauthen is a tremendous act."

The festival kickoff party was Thursday night with a concert by Tanner Usrey at The Majestic in downtown Fort Smith. The festival also will use The Majestic at noon Saturday for an emerging artists round table discussion with artists Holly Beth and Holly Tucker, Goins said.

Goins estimates Peacemaker generates about a $1 million economic impact on Fort Smith annually. It's also raised more than $500,000 in its six years for nonprofit groups in the area, he said.

The festival is expected to raise more than $100,000 for nonprofit groups including Children's Emergency Shelter, Girls Inc. and the Fort Smith Boys & Girls Club, Goins said.

Geffken called the festival "a fixture of Fort Smith" that city officials are happy to see return. 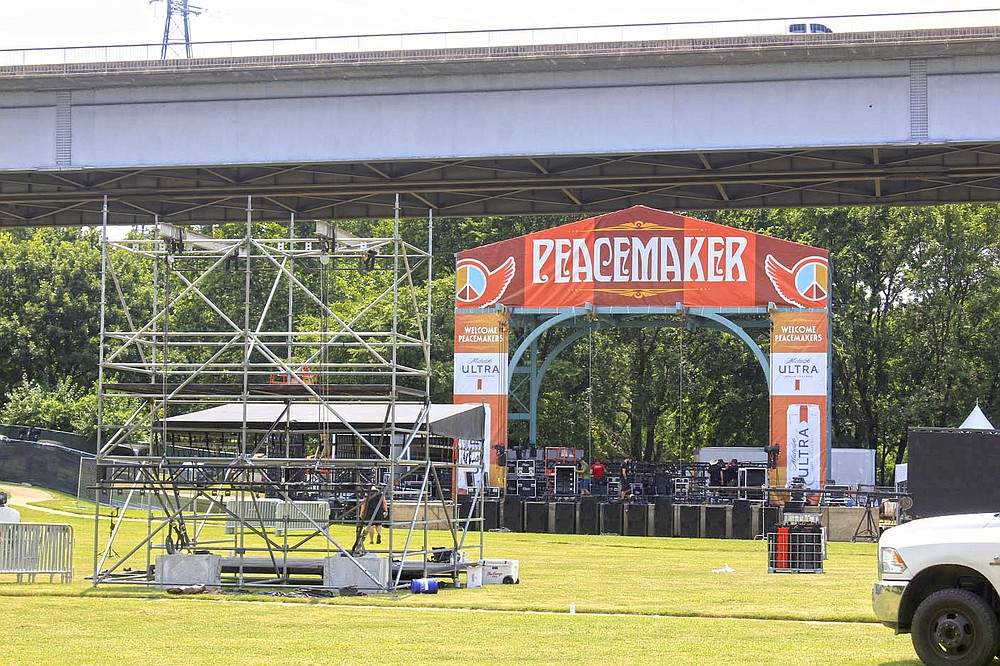 Workers prepare the Peacemaker Festival stage on Thursday, July 29, 2021 in preparation for the event tonight and Saturday at Harry E. Kelley Park in Fort Smith.