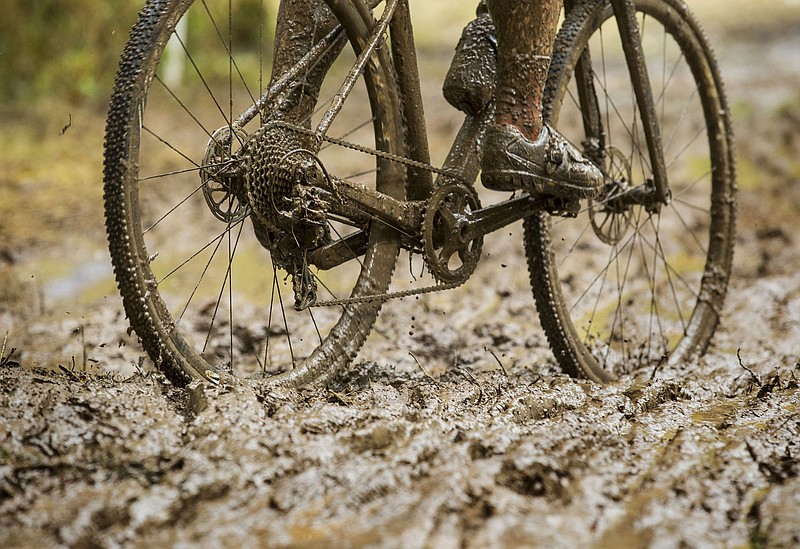 A competitor in the UCI Junior Men race pedals through mud Sunday, Oct. 6, 2019, during the the Fayettecross cyclocross races at Centennial Park at Millsap Mountain in Fayetteville. (NWA Democrat-Gazette/BEN GOFF)

The first event, Fayette-Cross, happened in October 2019. Another event is happening Oct. 13, and the Union Cycliste Internationale World Championships will be held Jan. 29-30. All events are at Centennial Park.

Cyclocross is akin to mountain biking, involving short courses with obstacles, hills, steps and rough terrain prompting riders to get off their bikes to run for certain parts.

The grant money is paying for cost of the events, rather than taxpayer dollars, said Molly Rawn, chief executive officer of Experience Fayetteville, the city's tourism bureau. The commission governs the bureau.

The commission hired Medalist Sports in Atlanta for $231,000 in May to manage the events. Out-of-pocket and reimbursable expenses will be invoiced and paid on an actual cost basis.

The projected budget for the events showed a deficit, Rawn said.

"In the course of bringing Medalist on board we adjusted our budget and realized there were some areas where we felt like we had not appropriately budgeted," she said. "So the Walton Family Foundation's Personal Philanthropy Group has offered to bridge that gap."

The bureau previously had an agreement with Parkven Productions in Colorado that fell through earlier this year. Parkven received the full $320,000 amount included in the contract and was released from its organizational duties.

The commission on Monday also granted Rawn and her financial team the ability to pay vendors associated with the cyclocross events without prior approval. Contracts or payments greater than $20,000 typically go to the commission for approval first.

Rawn said the bureau is playing catch-up after changing event managers, and vendors for security, food, beverages, fencing and other aspects need to be arranged quickly.

The measure will apply only to expenditures associated with the foundation grant, said Jennifer Walker, the bureau's vice president of finance. The bureau will present a summary of contracts and payments to the commission in December and March, after each of the two cyclocross events.

In other business, the commission approved a $45,000 contract with Spartan Race Inc. to hold a trail racing event Oct. 31. The event will coincide with the U.S. Trail Running Association annual conference to be held in the city.

Runners will be able to sign up for a 10k morning or night run, a half-marathon trail run championship and 50k trail run ultra championship.

Rawn said she expects revenue associated with the event gained from the city's tourism tax on lodging and food to exceed the amount spent on the contract. Half of the city's 2% hotel, motel and restaurant sales tax goes to tourism, and the other half goes to parks.