PREP SOCCER: 7-on-7 league a hit with teams 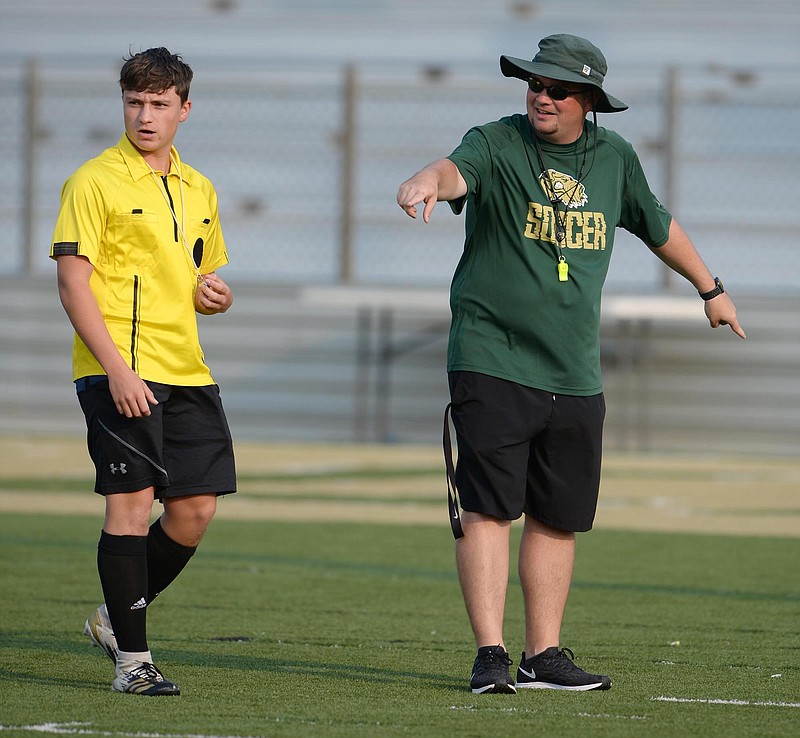 ALMA -- Forming a 7-on-7 summer soccer league began just as an idea about four years ago.

Now it has turned into a one-of-a-kind opportunity in the state for area high school soccer teams to develop and stay sharp in the offseason.

Alma coach Cory Sturdivant and Greenwood coach Tyler Woods first discussed back in 2017 what has now evolved into the summer league being hosted by River Valley teams for the first time this year.

"We got to know each other and talked soccer all the time," Sturdivant said. "Coach Woods is one of my best friends. We talked about doing a summer league for a bit. It ended up working out this year with us being able to do it. We got the idea from some schools in Texas in the Dallas area. The leagues are big down there. This idea has turned out to be a pretty good one for our area. I've gotten a lot of support from area coaches to make it happen."

The league attempted to form last year, but covid-19 shut down all summer workouts. The second try was the charm getting the league up and running this summer for the first time.

Alma, Greenwood and Clarksville were the original teams, then Farmington and Fort Smith Southside were added to round out the field. Play started in early June and is set to end this week with a final round of games.

When all is said and done, the league will have provided 12 additional games for each boys and girls programs. Alma, Greenwood and Clarksville all hosted throughout the summer with boys games played on Tuesdays and girls on Thursdays.

Teams are able to get in two contests per night played in the evening to avoid the summer heat. Games are about an hour long each with a halftime break.

"We wanted to come up with a way to develop our players just like basketball and football do in the summer," Woods said. "It is hard to get 11-on-11 in the summer because of vacations and sharing athletes with other sports. The 7-on-7 part was an awesome idea. I credit Cory because he has really put this together with the rules, schedule and logistics. I was just the guy telling him it was an awesome idea."

To the untrained eye, watching 7-on-7 soccer can look like an ordinary soccer match, but it has plenty of modifications to help develop different skills.

The field is much smaller, cut in half playing sideline to sideline with a regular size goal. A football field hosts two games at the same time. There are six field players and a goalie. Goalies aren't allowed to do long goal kicks and players can only attempt to score while on the attacking half of the field.

"The game can be a lot more attacking and higher scoring than a typical game," Sturdivant said. "You don't have to go as far down the field. The rules are a little different. With no long goalie kicks, it encourages the kids to play from the back. There are a lot more passes. We really like it because it helps us work on passing and communication. It helps us integrate the goalie into our attack with the passing and being able to play it back to them.

"We get good work with that. It encourages you to build up play with no deep shots. It is a great experience builder."

The format of the league and the style of play for development has been a big hit for the teams and coaches in the league. The uniqueness of the 7-on-7 game and it being something new for a lot of the players has helped.

"The players get more touches with the field being small-sided," Southside coach Mahmoud Ihmeidan said. "It is competitive and there are fans here. You don't see a lot of the 7-on-7 format in high schools. I don't know of another league like this in the state at this level. Players get tired of practicing. They want to play games. This has been awesome development for our players."

"This is great experience for our defensive guys and goalies," Clarksville assistant coach Aaron Plugge said. "You get a lot more practice than you get in a normal game. There are just so many more chances coming at them. We like that side of it. We don't like when we give up goals, but it is nice for our defense to get the work and learn from the mistakes. The field is so much smaller so the game is fast."

Game days in the 7-on-7 league aren't that dissimilar from regular-season game days during the varsity season. There are warm-ups, fans and even travel for most teams. And the most important part -- an opportunity to play another program with a high intensity of play.

"The atmosphere out here is amazing," Woods said. "The kids know it's all about developing out here. We'll get scored on. We'll make mistakes. But this is a great time to do it. For some of these young kids, you can practice for months with those guys but there are things you can't simulate but they see it out here in tough competition against other schools. Guys are playing hard out here."

The extra time this league is providing to develop players is invaluable for all programs in the league. It is a little more magnified for a school like Farmington, which just completed its first varsity season last year. It is the only school in the league not located in the River Valley. But the travel hasn't bothered the Cardinals, who mostly bring a junior varsity team for developing purposes.

"These guys just want to play," Farmington coach Tanner Feil said. "If the opportunity is there, we are going to take advantage of that. The drive down isn't bad at all. The kids want to be here. I have had a lot of fun with it. The quality of competition is pretty even. It makes it a challenge for all involved."

Farmington's Landyn Faught, who will be a junior next year, said he has loved playing in the league and getting extra games to get better with his teammates. Faught was a starter on the varsity squad last year and is soaking up the experience this summer.

He doesn't know what he would be doing if the league weren't around, perhaps just individual drills by himself he said. But he is glad he doesn't have to find out.

"I have really enjoyed the 7-on-7 game," Faught said. "It really helps you realize decisions quicker because the game is fast. It helps you with your fine touch skills. It has really helped a lot of us. The transition last year was different because it was our first varsity season. The games out here have helped us a lot because we haven't been teammates for very long. It has helped me a lot and I think it has really helped the freshmen out here."

Programs are still trying to make up for lost time after the 2020 season was wiped out because of covid. The extra time to develop has been helping out the players and coaches in the league. 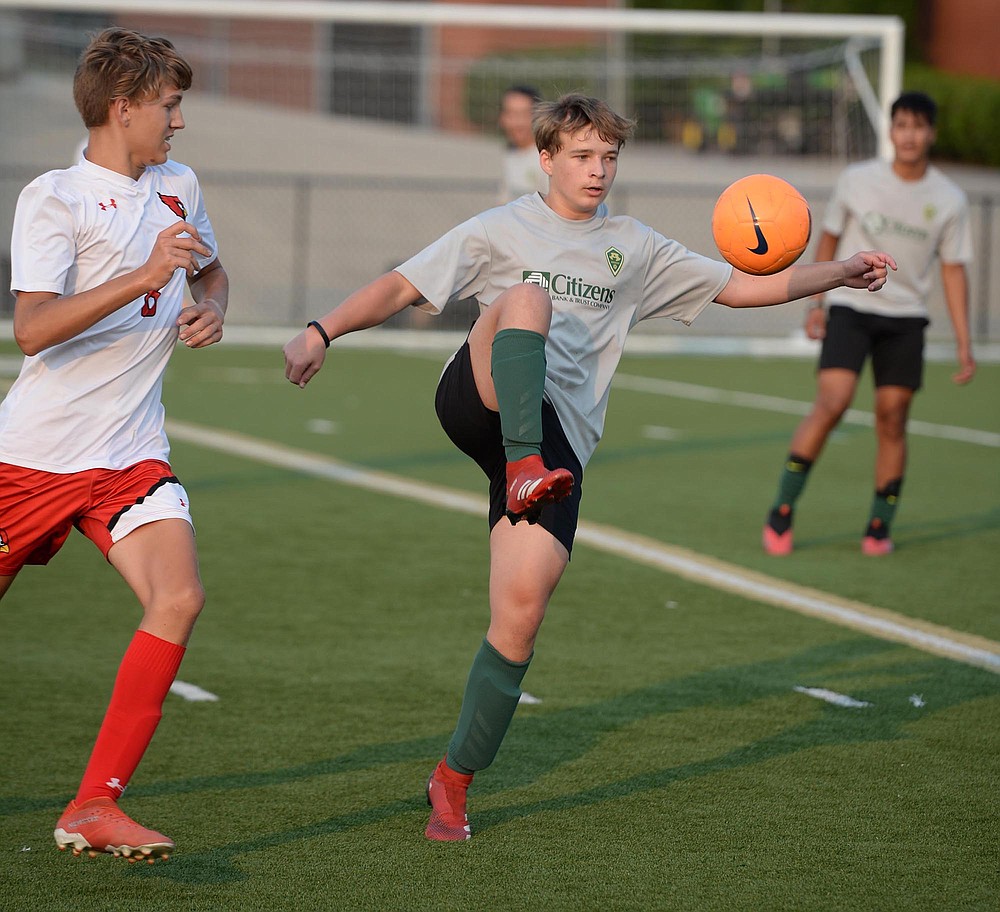 son, it set teams back a year," Sturdivant said. "But with our program being so new starting in 2017, it felt like it set us back two years. The summer games have really helped us try to get some of that time back."

Three of the programs in the league -- Alma, Farmington and Southside -- all have one head coach for both boys and girls squads. With the league splitting the nights for boys and girls play, those coaches are able to get some one-on-one game day time they usually don't get with having to have a split focus during the regular season.

"Games being on different nights of the week really helped us out here for those who coach both programs," Sturdivant said. "It allows me to work with both groups individually. It has helped a lot in developing. The girls game is a little more tactical with the boys game being more direct and fast paced. The 7-on-7 game has really helped our girls program because we share a lot of athletes with different sports. If you only had 11 kids and are playing a full field, you don't have any subs. But now if you have 11 kids and are playing 7-on-7, you have some depth."

The future of the league and the 7-on-7 format is bright in the state. Sturdivant hopes to add more teams and perhaps have two venues host on the same night for more games during the next summer league. There have been discussions of doing this league in the fall, too. Alma and other teams are looking into making its youth programs play the 7-on-7 format as well.

"I've been getting a lot of requests for our setup from coaches in the area," Sturdivant said. "Teams finding out about this want to be a part of it. That gives me hope that we will be able to expand or other leagues will pop up in the coming years. The look you get from playing other teams instead of just practicing like in the past is huge."