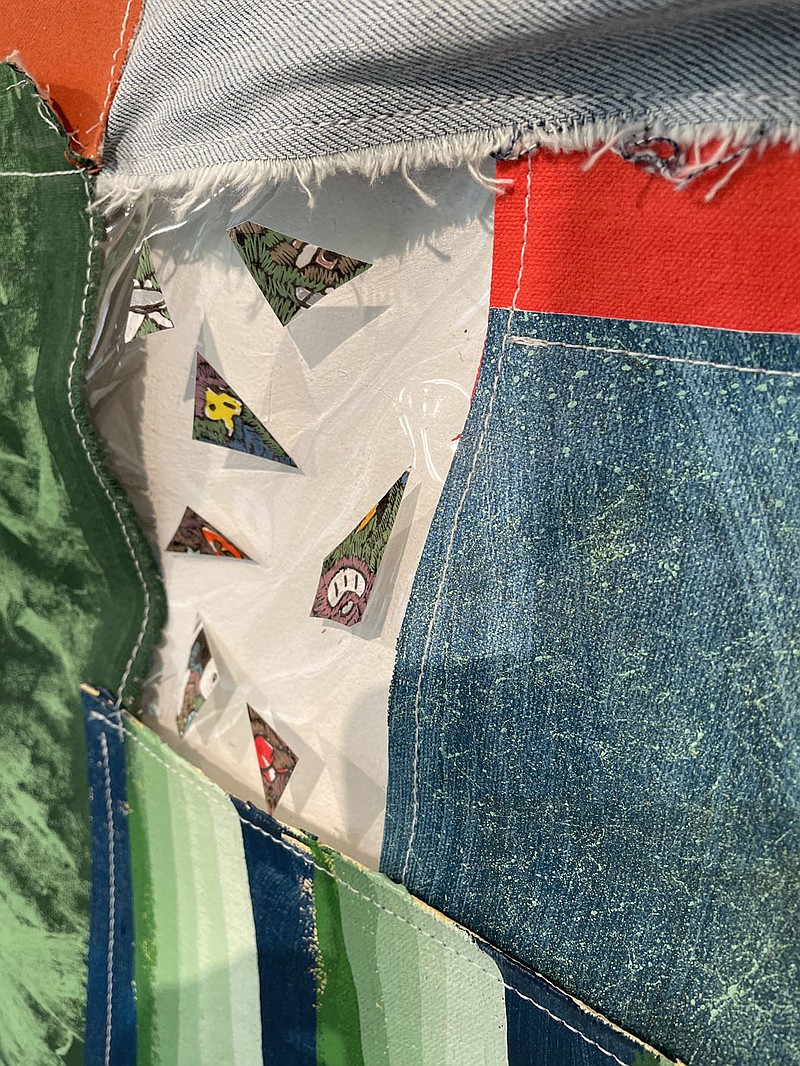 While individual work from artists Adam Fulwiler and Christian Schultz will be on display in “Intimate Immensity,” they are also collaborating on pieces for the show, among them this large 48-by-48-inch collage piece. (Courtesy Photo)

Starting July 28, art lovers will have a chance to see the work of the artists who won Bentonville art gallery 211 South's first annual University of Arkansas MFA Call for Art, which launched this spring. The gallery will mount "Intimate Immensity," featuring selected works by Adam Fulwiler and Christian Schultz.

Gallery director and curator Kellie Lehr reviewed images, artist statements and bios from applicants' submission materials and then conducted studio visits before choosing Fulwiler and Schultz as the award recipients.

Lehr says both artists have distinct styles that drew her to their work. Schultz's drawings and sculptural objects "investigate states between play and serious engagement and include playful landscape imagery inspired by his childhood back yard." Fulwiler's work "explores the limits of crossover between fictional and poetic language and painting using dynamic line, shape and color, painted, collaged and sometimes sewn onto the canvas." As distinctive as the two artists' work is, however, Lehr says she saw something in each that complemented the other, leading her to choose both for a show.

"Chris has such a sense of playfulness in his work," observes Lehr. "It's very evocative of a childlike aesthetic, a little bit. And in his drawing, he uses crayons, which again, kind of supports that playfulness and that reconnection, I think -- most of us as children, colored and drew and experimented, and he really brings that out. And then, when I went to Adam's studio, I noticed also this sense of playfulness, a little bit of willingness to experiment and play, which is something that I think is easy when we're children, but as we get older, that sometimes goes away.

"It's harder to get back to that feeling of just a sense of play for play's sake, without this need to know exactly what's going on and what the final product is going to be," Lehr muses. "Yet they are both very serious artists, and, obviously, do care about what the final product looks like -- it's just they both bring about and highlight this sense of play. Adam also has a real interest in poetry, and I also felt that in Chris' work, so I felt like they both sort of have this poetic sensibility that runs throughout. It's not as narrative as some other artists' work, for example -- it's more about the resonances between works, and then within a work as well."

While each artist will exhibit pieces of their own, they are also working together on several new projects, including a 48-by-48-inch sculptural painting that "combines the shared alternative collage methods and differing mark making techniques of both Fulwiler and Schultz's practices."

"And then they're also doing some interesting things -- we'll have to see how it ends up playing out," says Lehr. "Adam, for example, is painting on the opposite side of some of Chris' sculptures. We're probably going to keep putting those on the floor so people can walk around and see how Chris made them on one side, while Adam painted on the other."

211 South is a Bentonville art gallery renamed and redesigned just last year into a larger space, says Lehr. It's located within the Engel and Volkers NWA offices and has regular gallery hours. The space originally opened as the Gallery at Midtown in 2016, and, says Lehr, was one of the first art galleries to open in Bentonville.

Lehr says the award is ongoing and will be offered each spring.

"This is going to be for all of the MFA students at the University of Arkansas who want to apply, and then we're also allowing, for example, if a professor has an advanced student who is not officially in the MFA program, but they want to apply, that's fine as well," Lehr explains. "We're trying to be flexible. We want to offer it as a kind of springboard and an opportunity for MFA graduates to have a show that they can really work together on and plan for. We don't have a lot of galleries here that offer that kind of opportunity, so I'm hoping they'll take advantage of it."