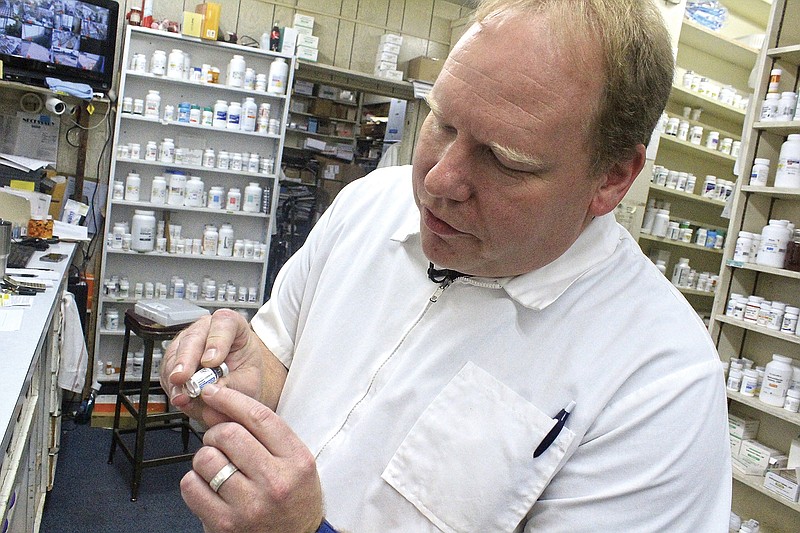 FORT SMITH -- To increase the local covid-19 vaccination rate, city officials may employ methods used successfully in another effort in which government officials had to earn the trust of their constituents.

Mayor's spokesperson Jurena Storm on Wednesday said officials are considering if they can use parts of their strategy for the 2020 United States Census to get residents vaccinated. Storm's statements come as Sebastian County was about 26.16% fully vaccinated as of Friday, according to the Centers for Disease Control and Prevention.

Sebastian, of which Fort Smith holds about two-thirds of the population, is the most populated county in the state below 30% fully vaccinated, according to the CDC.

The county's vaccination rate lags as the state consistently adds hundreds and sometimes more than 1,000 new covid-19 cases each day. As of Thursday, 849 Arkansans were hospitalized and 158 were on ventilators, according to the Arkansas Department of Health.

"From my perspective, it's going to be messaging -- how we message and trusted voices, just like it was with the census," said Storm, who helped Mayor George McGill in his efforts as the Arkansas Counts Committee chairman in 2020.

The mistrust of the government in the city's vaccination efforts is "carbon copy" of the sentiments they heard during the census, Storm said.

During the census, residents were concerned Immigration Customs Enforcement or other law enforcement would show up if they gave their information for the census, Storm said.

But Sebastian County in the census had an approximate 65% initial response rate -- about 3% higher than the state rate, according to McGill. The efforts included door-to-door census surveys, iPad stations, a "census van" that traveled to populated areas and promoting events at churches. They also brought the Mexican consulate to the city to give a public service announcement, Storm said.

When it comes to the vaccine, Ward 2 city director Andre Good said he's seen people of all races and ethnicities who are afraid to get it. For the city's Black residents, he said the Tuskegee study, in which the U.S. Public Health Service and CDC lied to 600 Black men in Georgia over four decades to study the effects of syphilis, as reason for concern.

While Good, who is Black, admitted he was skeptical of the vaccine at first, he said it's important to get it because "we consider others more than ourselves."

Storm said she also called U.S. Sen. Tom Cotton, R-Little Rock, to try to convince his supporters to get the vaccine, but Cotton declined without giving McGill's office a reason.

Cotton's office didn't respond to a Thursday phone request for comment on his decision to decline.

Not for lack of trying

While city officials have been effective when administering vaccines, they now must discern what the most effective allocation of those resources would be, Storm said.

So far, Storm has spent a little more than half of her $25,000 budget promoting two city-organized vaccine clinics, she said. The first was held Feb. 24 and March 17, administering two doses of the Pfizer vaccine in coordination with the Arkansas Department of Health. The third was March 30, which administered the single-dose Johnson & Johnson vaccine with the help of Good Samaritan Clinic.

"There's been a strong effort since we've been giving vaccinations to let people know where their choices are to get vaccinated," said Richard Taffner, regional director for the Arkansas Department of Health.

With less than half the budget remaining, Storm said she and McGill have to carefully discern how to use the money. As of Wednesday, the two were brainstorming ways to do this, she said.

In the meantime, they've decided to put vaccine messaging into McGill's public statements, she said. McGill in 2020 routinely asked residents to take the census at public meetings.

"Sebastian County is lagging way behind the state and the nation when it comes to covid vaccines," McGill said Tuesday at the city Board of Directors meeting. "Whatever it takes to get people to do that, take that, let's encourage them to do so. Certainly, we don't want to get to a point where manufacturers have to make a decision about closing their plants again due to infection rates. We don't want our schools to have to close due to infection rates."

While Storm said churches in the area could reach out to the Department of Health or the city for vaccination clinics, she said efforts such as these have already been done.

"We're to the point where everybody who wants it has it, and those who don't, they don't," she said.

Storm said people who haven't gotten vaccinated typically give two reasons: they don't want to take it or they haven't gotten around to doing it. For the latter group, Storm said the fact vaccine appointments and clinics are usually during work hours is a common reason given.

Daniel Lunsford, owner of Prince Drug in Fort Smith, said he'll wait as late as they have to in order to administer the shot due to the 15-minute wait time for the vaccine to thaw before administration.

While vaccination rates still lag in Sebastian County, Lunsford said Prince Drug has administered about 10 shots per day since late June. He also said more people have texted him with inquiries about the vaccine. Taffner said the Department of Health vaccination numbers have increased slightly in Sebastian County.

Lunsford attributes this to the spike in cases.

"Some people are realizing it's not over," Lunsford said.

Those in Arkansas who wish to get the covid-19 vaccine may find a location to do so here.