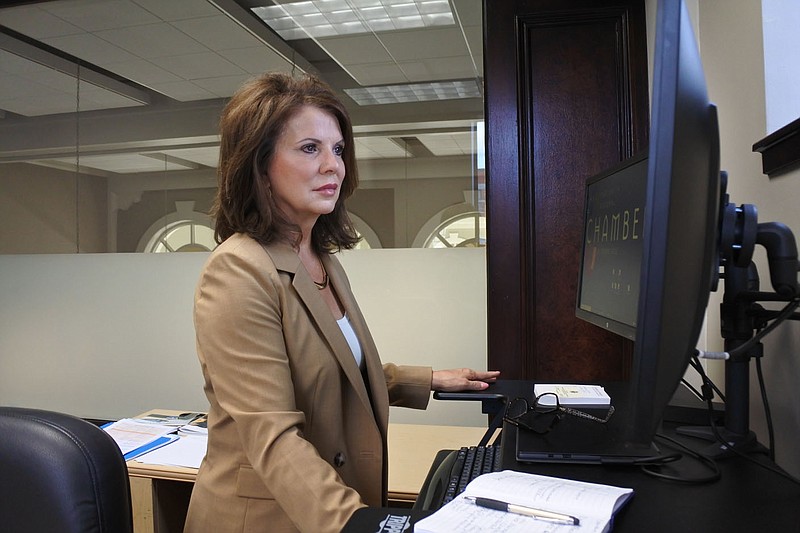 Anita Brackin, vice president of workforce development for the Fort Smith Regional Chamber of Commerce, works in her office at the chamber Monday. (NWA Democrat-Gazette/Thomas Saccente)

FORT SMITH -- Leaders in the River Valley said they expect the new vice president of workforce development to strengthen the ties between education and occupation.

Anita Brackin, 62, started in her position with the Fort Smith Regional Chamber of Commerce on June 21. She succeeded Steven Lamm, the only person to hold the position after it was created in 2019, according to Tim Allen, president and chief executive officer of the chamber.

Brackin described herself as a "collaborator, convener, connector" between K-12 and higher education, community partners, businesses and industries. Her job involves continuing to develop, retain and acquire a workforce to support economic development needs for existing and future companies in the Fort Smith region.

Jason Green, vice president of human resources for the NEMA Motors Division for ABB Motors and Mechanical Inc. in Fort Smith, said his company and the chamber, along with other local entities, have worked on a regional workforce development plan for the past five years. Brackin will play a crucial role in maintaining its momentum.

Among the challenges manufacturers like ABB face are an aging workforce and radically changing skill sets, according to Green.

"We have worked hard together to rethink the way we approach career and technical education, and, as a result, we're going to be in a better position to change the lives of our students and better support our current and future businesses with a continuous pipeline of technically skilled talent for their local operations," Green said.

The relationship between the chamber, higher education and K-12 leaders plays a significant role in the ongoing success at the School District's Peak Innovation Center, according to Udouj. This includes the center's success in garnering community support, raising additional funds for construction and programming, making connections with business, industry and the community and recruiting students to participate in the programs offered.

The Peak Innovation Center will provide career and technology education for high school students across 22 regional school districts and district-specific visual arts programming, according to the Fort Smith School District. It is a collaboration between the district and the University of Arkansas-Fort Smith that was originally intended to open in August, but is now planned to be completed by Jan. 4.

However, classes for students will begin as scheduled at the university.

Latisha Settlage, the school's dean of the College of Business and Industry, said the university is proud to partner with Brackin and the chamber to make sure it provides programs and curriculum preparing its graduates with valuable skills to serve regional workforce needs both in the present and the future.

The most important role Brackin can play for the university is to help it connect with not only companies who need its current graduates, but to ensure learning keeps pace with technology as it evolves.

The university expects Brackin to add value to continued conversations about workforce development and how to best utilize investments such as the Peak Innovation Center, Settlage said.

The website for the Center for Business and Economic Research at the University of Arkansas' Walton College of Business listed the unemployment rate in the Fort Smith metropolitan statistical area as 4.7% as of May.

Mervin Jebaraj, director of the Center for Business and Economic Research, said the center typically finds the kinds of jobs that are unfilled in the Fort Smith region tend to be similar to those in many other regions. These include health care occupations, as well as skilled trades and, more recently in the wake of the covid-19 pandemic, retail occupations.

Brackin said she believes career awareness about the types of jobs available in sectors such as manufacturing, health care and information technology is an issue for both K-12 and higher education students, as well as the community as a whole. Much of that can be attributed to a lack of exposure about these jobs and what they entail among local residents and part of Brackin's role is figuring out how to spread the word about them.

This includes the education/training required to get these jobs, Brackin said. The chamber is also encouraging companies to use internships and apprenticeships.

Allen said Brackin's focus on career awareness is a continuation of what Lamm did during his tenure as vice president of workforce development. The advanced manufacturing, health care and information technology sectors represent almost 35% of Fort Smith's gross domestic product.

Construction also has a strong need for workforce development, which the chamber hopes to address in the second phase of the Peak Innovation Center project, according to Allen.

"Peak is obviously the best example of how our strategy is working," Allen said. "The new focus on workforce development has already been successful when it comes to the recruitment/retention of businesses."

Allen said three companies that announced manufacturing expansions in Fort Smith early this year -- Hytrol, Owens Corning and Mars Petcare -- told the chamber its workforce development strategy was a key reason why they chose to invest into the city. These expansions will mean hundreds of millions of dollars in financial investment and are expected to create hundreds of jobs.

"If you want to win economic development projects, this business is not about incentives and land and free buildings and whatever," Allen said. "Those are pieces of it, but the way you separate yourself from the pack and the way you win quality projects is to have an available workforce that can do the job."

Brackin said she has more than 25 years of experience in workforce development. She was the associate vice president of workforce, economic development and continuing education at Southwest Tennessee Community College in Memphis, Tenn., before coming to Fort Smith, according to a chamber news release.

Brackin also worked as the director of workforce development and education for the Greater Memphis Chamber and served on boards for entities such as the Bartlett Area Chamber of Commerce, Shelby County Joint Regional Economic Development Board, Graduate Memphis Steering Council and Tennessee Valley Authority Workforce Development Institute.

Anita Brackin earned a bachelor’s degree in public relations from Arkansas State University in 1981. She also has two master’s degrees from the University of Arkansas: one in workforce development, which she got in 2008, and another in operations management, which she earned in 2012.