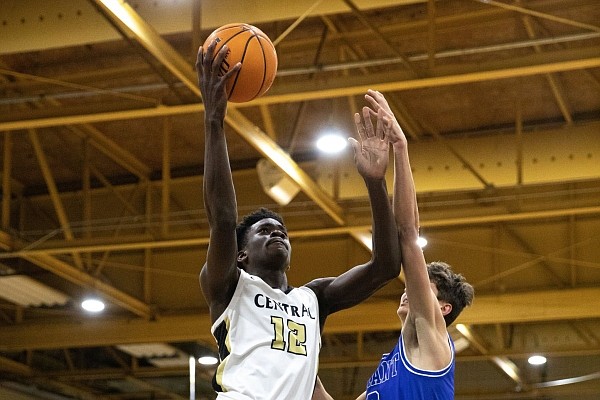 Little Rock Central’s Annor Boateng, a 6-5 forward, attempts a shot around the rim during a game against Bryant.

He made the Arkansas Democrat-Gazette's All-Underclassman Team after averaging 6.9 points, 5.8 rebounds, 1.4 assists, 1.8 steals, 1.7 blocks and 2 deflections over 29 games last season for the Tigers.

Coach Eric Musselman is: A nice and understandable coach.

Favorite NBA team: Oklahoma City when Kevin Durant and Russell Westbrook were on the team.

My mom is always on me to: Think positive and be mindful

My two pet peeves are: Smacking when eating and when people start to talk then say "nevermind."

I will never eat: Pickles by themselves

Your favorite fast food chain and why: Chick-fil-a. They have the best customer service.

My favorite sweet tooth craving is: Life Savers and Skittles

Who would you want to be stranded with on a deserted island: Bear Grylls

Favorite animal and why: Sloths, because they know how to chill and relax.

Hobbies: I like to go bike riding in my neighborhood.

The one thing I could not live without is: My family

If you were a superhero, what power would you have: Teleportation

Role model and why: Ben Carson, because he was able to do something that everyone thought was impossible (separate conjoined twins.)

People would be surprised that I: Play three instruments