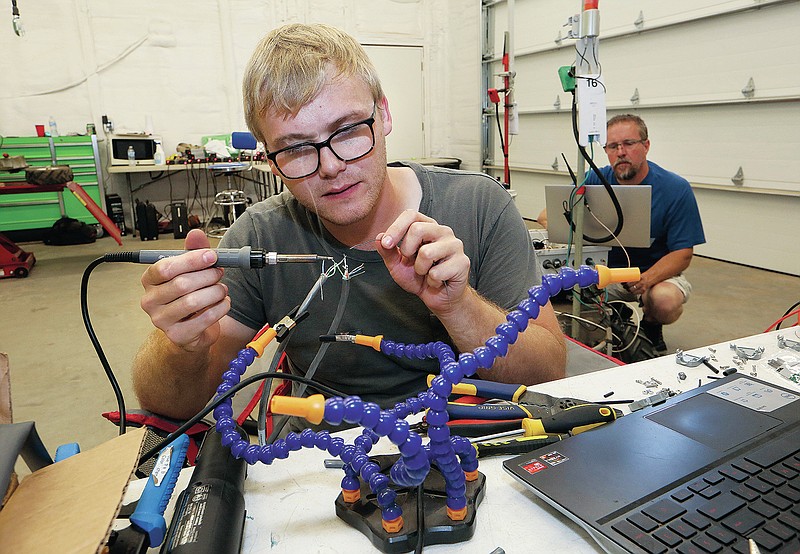 CHENEY, Kan. -- For years, Kansas farmer Clint Brauer has struggled with keeping weeds out of his row crops. Along with keeping living roots in the ground, organic practices and no-till methods, he tried crimping -- but the pigweeds just grew taller.

Three years ago, Brauer, an ex-California-based executive who farms in Haven and Cheney, decided to implement a wild plan, using robots to behead weeds.

"I realized there was no great way to get the weeds out at scale without chemicals," Brauer said. "I needed to invent one."

Before chemicals replaced them, workers pulled weeds from the farm. Greenfield Robotics puts the "workers" back in the field with a new kind of worker -- a mechanized one.

"We want to control weeds with labor and make it robot labor," Brauer said. "Robotics is our way of putting (mechanized) labor back into the farm."

The challenge for Brauer was he felt regenerative farming did not work for large fields without the heavy use of agrichemicals.

"I came up with the idea for it (a robot) and tested it manually," Brauer said. "No one knew if it would work. It has to fit between rows."

Brauer started up his company, Greenfield Robotics, on one of his family farms in Cheney in 2018. He currently uses the weeding bots running on other farmers' soybean crops in Harper, Reno, Rice and Sedgwick counties in central Kansas.

Along with soybean crops, Brauer hopes to work with sorghum, cotton and possibly canola farmers.

There is slightly under 90 million acres of soybeans planted across the U.S. this year, according to the USDA. During 2020, Kansas ranked seventh in soybeans planted, with more than 5,000 acres. The Sunflower State follows Illinois, Iowa, Minnesota, North Dakota, Indiana and Missouri in soybean acreage.

"Our mission was always to get the chemicals out of farming," Brauer said. "There is no resistance to the spinning blade."

The robots, which travel from 1 to 3 mph, are water-resistant and weigh about 200 pounds. As they move between the crop rows, they cut down the weeds with their blades, leaving the chopped-up debris in their wake.

Although they are programmed to stay in their lane, someone is monitoring them on a computer screen at all times.

Both Brauer and Jerry Poole, the company's president and CEO, grew up in Kansas. Brauer helped his father tend to their crops and cattle in Haven. Poole, who grew up in southeastern Kansas, spent time on his grandfather's hog and cattle ranch in Oklahoma.

Brauer, who had a successful career in start-ups and technical businesses in California, got together a top software engineer and several other key players to mount his company.

After a career in engineering and a brief health issue, Poole wanted to put his efforts into helping farmers, so he joined Brauer's team.

Food is medicine if it is grown without too many chemicals, Poole said. "Big agriculture are creating virtual poisons," he said.

Although the robots can be used on any type of farm, conventional or regenerative, it works better on a farm that is using regenerative principles -- always having a living root in the ground, using cover crops, not tilling the field and having animals graze on the land. On his farm in Cheney, Brauer practices organic and regenerative principles and has a flock of sheep that he moves around the land.

Regenerative practices leave carbon in the soil. Because these practices hold more moisture in the soil, the robots have an easier time manipulating on the ground.

A recent study performed by the Technical University of Munich in Germany found plant residues, or roots left in the ground, are important for carbon storage.

According to Carsten Muller, Ph.D., at TUM, these roots can help ensure carbon is stored in the soil for longer.

"We plan to realign the interests of farmers and consumers with a food system that is economical and sustainable," Brauer said.

The company charges per acre at the same rate the farmer would pay for chemicals. It usually takes about three run-throughs per season for each crop, but that might change by climate. Brauer hopes to expand to other states.

"We work until they (the plant) canopy," Poole said. "We start post-emergence (of the crop)."

The U.S. is the world's largest producer and exporter of agricultural pesticides and one of the largest users -- utilizing 1.2 billion pounds of pesticides in 2016, according to Nathan Donley, Ph.D., a researcher at the Center for Biological Diversity.

Unlike herbicides, robots do not need specific weather conditions, like rain, to work. After starting his business, Brauer learned of Naio Technologies, a French startup, that uses robots to weed near garden vegetables. In 2011, the company introduced robots that work with mound-grown vegetables, especially lettuce. Recently, they introduced a robot that could work in vineyards.

"I really appreciated them," Brauer said. "They gave me good advice."

Brauer believes there is a lot of talent in the Sunflower State.

"I have a great team," he said. "Next year, we hope to grow by about ten times." 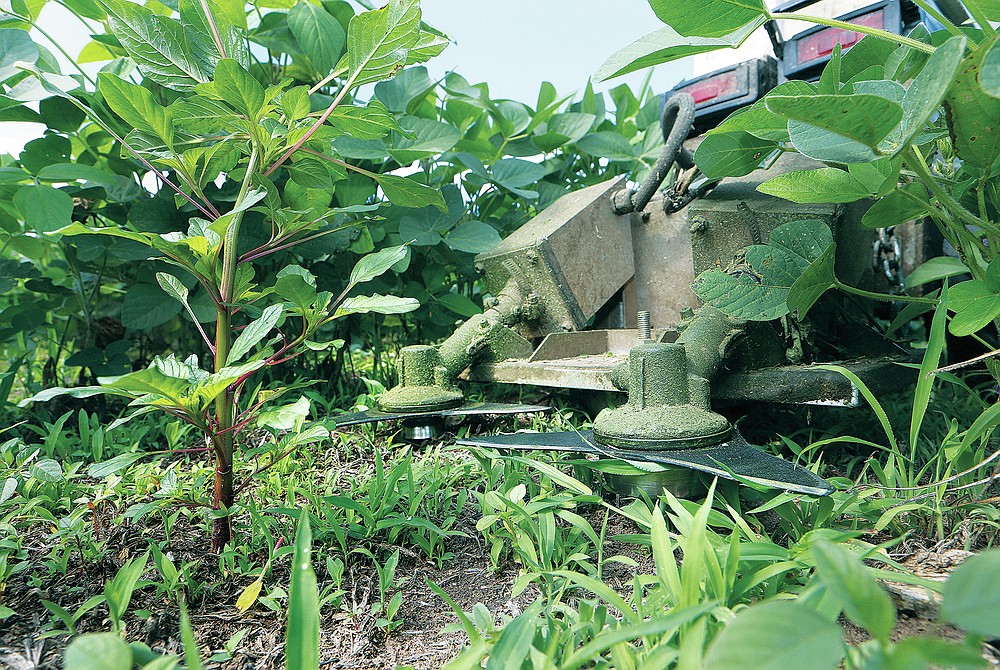 A Greenfield Robotics robot in a soybean field is about to cut down a weed that is located between the 10 inch rows of soybeans at Clint Brauer's field near Cheney, Kan., on Tuesday, July 6, 2021. The robots are different with one cutting with two blades and one cutting with three blades. (Sandra J. Milburn/The Hutchinson News via AP) 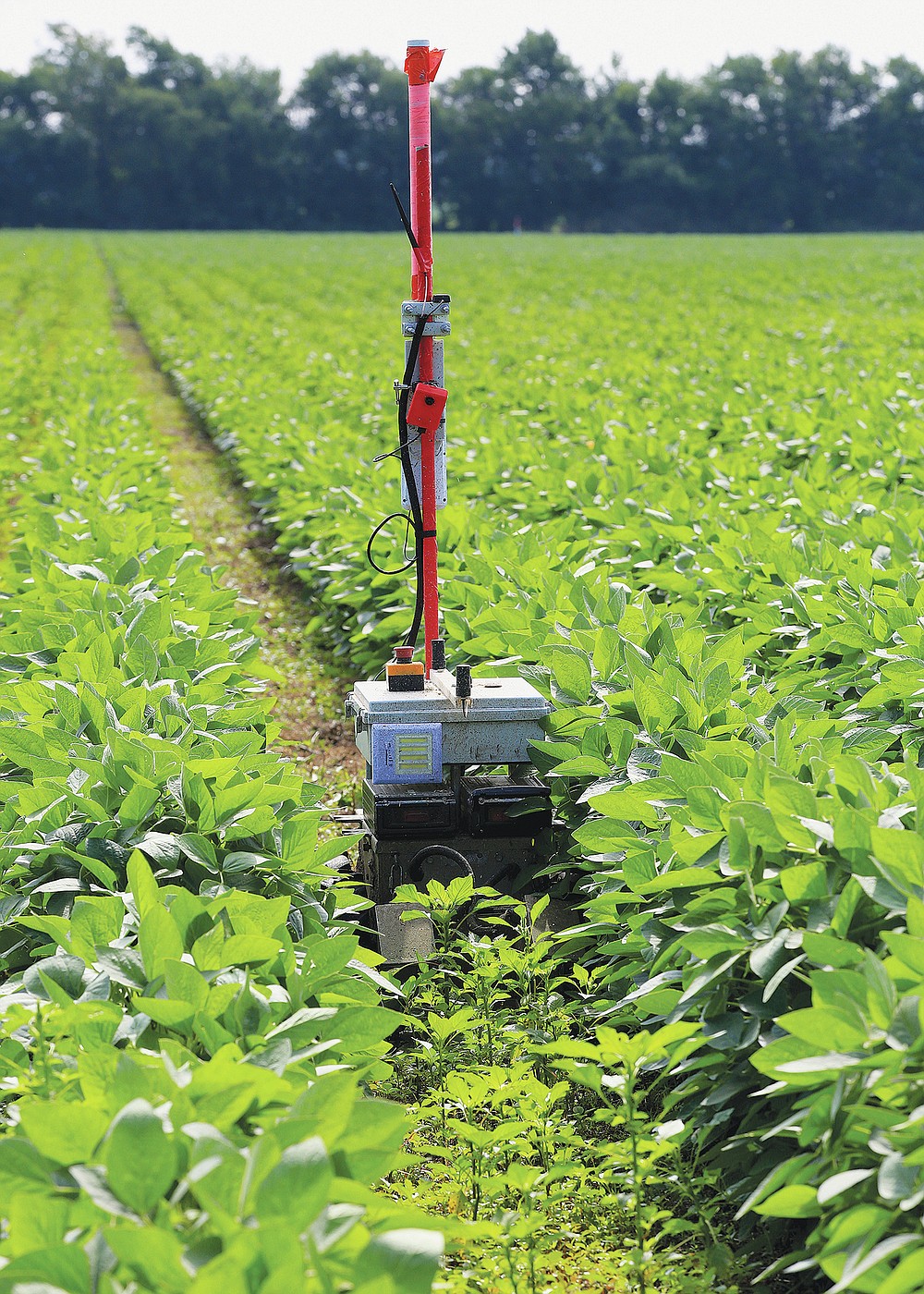 A Greenfield Robotics robot travels in between rows of soybeans as it cuts down weeds in a field near Cheney, Kan., on Tuesday, July 6, 2021. In front of the robot is the density of weeds that will be cut and behind it shows the result. (Sandra J. Milburn/The Hutchinson News via AP) 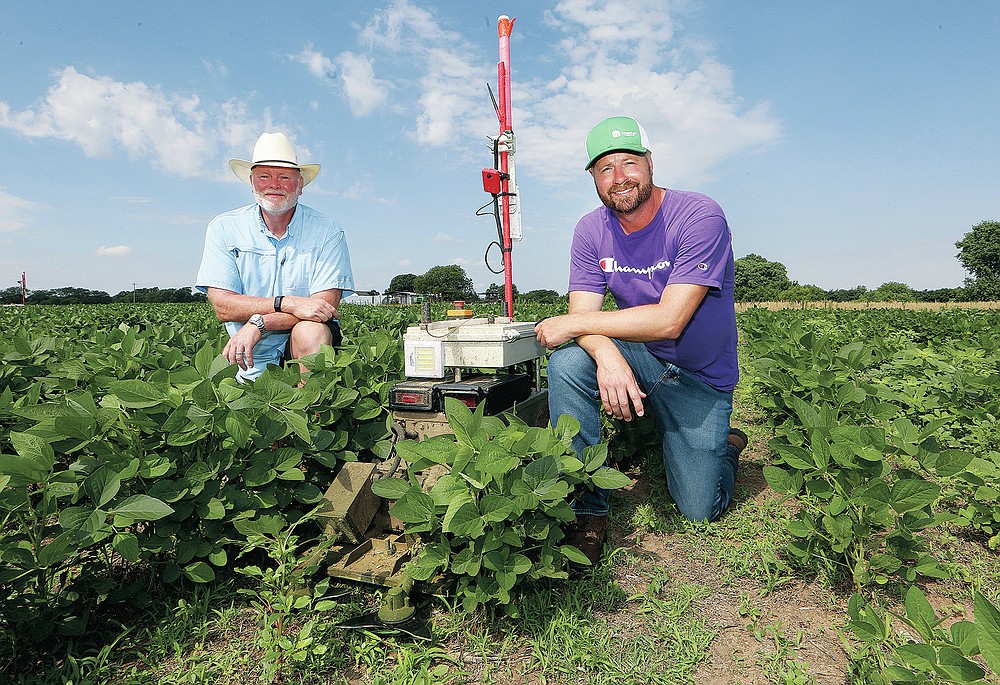 Greenfield Robotics is a company that builds robots who control weeds by cutting them down without tillage and without herbicides, owned by Kansas farmer Clint Brauer, right, with Jerry Poole, President, left, on Tuesday, July 6, 2021, in a field near Cheney, Kan. (Sandra J. Milburn/The Hutchinson News via AP) 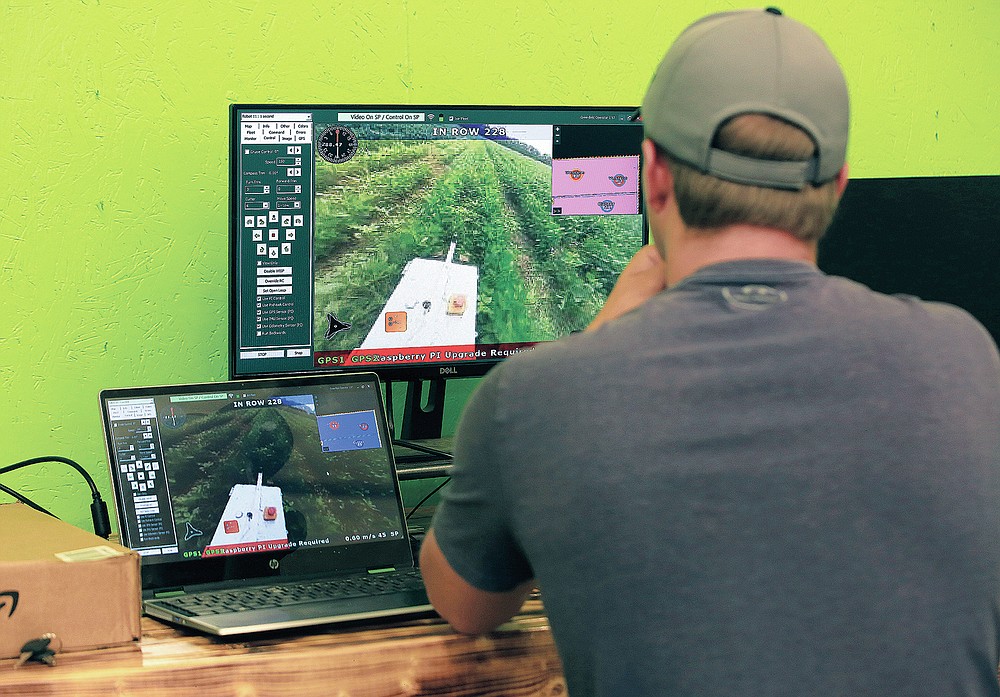 Levi Helten, a mechanical engineering intern from Kansas State University, operates the robots as they travel outside in a soybean field near Cheney, Kan., Tuesday morning, July 6, 2021, as part of the Greenfield Robotics company. (Sandra J. Milburn/The Hutchinson News via AP)